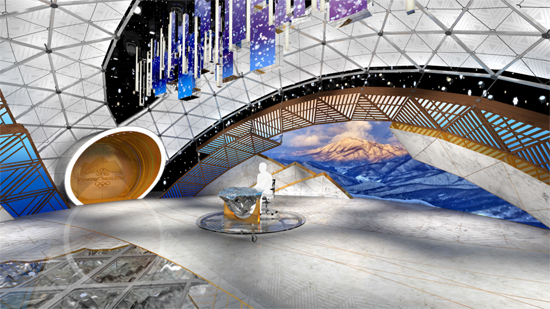 Wed, Jan 3rd 2018 03:40 pm
NBC Olympics on Wednesday unveiled the set designs for NBC's primetime, daytime and late night studios for the XXIII Olympic Winter Games, which will be located inside and on the rooftop of the International Broadcast Center in the Taebaek Mountains of PyeongChang, South Korea. NBC's primetime and late night studio coverage will originate from NBC Olympics' state-of-the-art, 3,500-square-foot geodesic dome set, designed to appear carved out of the PyeongChang mountainside and showcase the natural beauty of South Korea.
Featuring a 40-foot-by-16-foot LED wall, complemented by 18 55-inch, high-definition monitors, the first-of-its-kind studio provides space for a main anchor desk, interview areas, a news update desk, and more than 15 different standup locations for host Mike Tirico to bring the excitement of the Games to viewers during NBCUniversal's 18 days of coverage.
In addition, on the rooftop of the International Broadcast Center, NBC Olympics will have a 1,000-square-foot winter lodge set with windows overlooking the ski jumping venue at Alpensia Ski Resort and the panoramic views of the Taebaek Mountains.
"Our collection of studios for the PyeongChang Olympics is by far the most complex and challenging ever conceived for NBC Olympics' coverage of a Winter Games," said Michael Sheehan, coordinating director, NBC Olympics.
NBC Olympics will use a total of 13 studio sets for coverage of the 2018 Winter Games across NBC, NBCSN, CNBC, USA Network, NBCOlympics.com and the NBC Sports app.
NBCSN's coverage each day will originate from the network's studio in the Gangneung Coastal Cluster at Olympic Park, the site of figure skating, hockey, speed skating and curling competitions. The set at Olympic Park will be the home of all primetime, daytime and late night coverage on NBCSN, and will feature a 30-foot-by-30-foot outdoor skating rink that will be used for demonstrations and standup interviews, a first for NBC Olympics.
Studio sets will also be located at NBC Olympics' headquarters in Stamford, Connecticut, where five studios will be dedicated to hockey, figure skating, curling and digital coverage.
NBC Olympics' studios in PyeongChang are designed by award-winning set designer Bryan Higgason, and the team of New York-based HD Studio. Lighting for NBC's studios is designed by LDG, and all fabrication is done by blackwalnut.
NBCUniversal will present more than 2,400 hours of coverage of the XXIII Olympic Winter Games. NBC's coverage of the PyeongChang Games begins in primetime on Thursday, Feb. 8, at 8 p.m. ET - one night before opening ceremony coverage on Friday, Feb. 9 - and continues until the closing ceremony on Sunday, Feb. 25.
Categories
Entertainment OYT