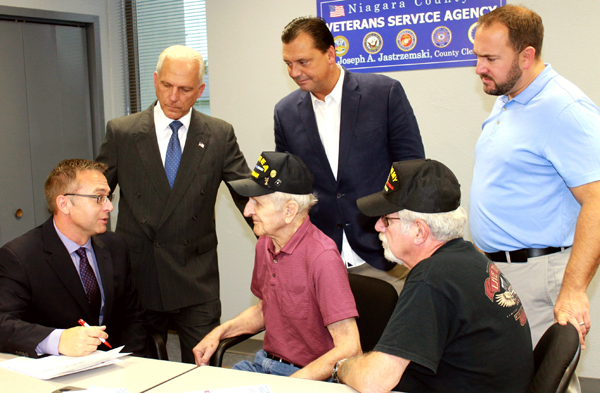 Fri, Dec 22nd 2017 03:10 pm
By Christian W. Peck
Niagara County Public Information Officer
Niagara County Clerk Joseph A. Jastrzemski has made "bring government services to the people paying for them" an unofficial motto of his office in the two years since he was first sworn in.
He's held town hall meetings. He's sent pistol permit office staff to gun shows in the region to amend permits on-site. He's created satellite pistol permit offices in Niagara Falls and North Tonawanda. He's made motorcyclist outreach a big part of local Department of Motor Vehicles operations. He's made the historian's office more accessible.
Niagara County's veterans are next on his agenda, with satellite offices planned in Niagara Falls and North Tonawanda - relying on the same formula that has worked well for pistol permitholders.
"Niagara County is a big enough chunk of land that it's a hassle for our residents to have to come all the way out to the county seat in Lockport for every transaction. That's why we have three DMVs," Jastrzemski said. "That was the inspiration for our satellite pistol permit offices: People with routine transactions didn't need to drive all the way to Lockport if they could wait until we came to them. We're going to try the same thing for our veterans."
Jastrzemski has worked closely with county veterans service agency personnel for weeks to ensure they would be able to bring information and forms for various services to the county's other two major cities every month. They will also ensure a veterans service officer is on-hand to answer questions.
"Our veterans served their communities in war and peace, and made sacrifices that many of us can only appreciate from reading books and hearing stories," Niagara County Legislature Majority Leader Randy R. Bradt said. "Joe and the veterans service agency staff are acknowledging that sacrifice here, and making sure our government serves those who served our community."
Legislator Rich Andres who chairs the legislature's community services committee, concurred.
"Veterans in this county are every age from early 20s to late 90s," Andres said. "There is a convenience factor for people of all ages, from those busy working to climb their ladders at new jobs, to elderly retirees for whom a trip to Lockport is a burden."
Jastrzemski said he plans to continue looking at ways government services can be taken out into the larger community.
"The people paying the bills shouldn't have to come to the government to get the services they're paying for, and neither should people, like our veterans, who've earned those services," Jastrzemski said. "If we can make interacting with government easier, we will."
To make the program a success, Jastrzemski has reached out to other government agencies when possible, including the DMVs that fall under this office and Niagara County Employment & Training. E&T will play host to one of the veterans service agency satellite offices.
Director of Employment & Training Donald Jablonski, himself a Navy veteran, called the move "a natural fit."
"We regularly see members of the veterans community, and one of the questions we often ask is if they've visited the veterans service agency to ensure they are receiving the benefits they're entitled to," Jablonski said. "We want to make sure those folks don't fall through the cracks while giving other veterans a welcoming experience."
Veterans service agency satellite hours will be held in North Tonawanda at the North Tonawanda DMV, 500 Wheatfield St., on the first Wednesday of every month from 8:30 a.m. to 1 p.m., beginning Jan. 3.
Satellite hours will be held in Niagara Falls at the Employment & Training office in the Trott Access Center, 1001 11th St., on the third Wednesday of every month from 8:30 a.m. to 4 p.m., beginning Jan. 17.
Categories
Home feature NFP Our Fave Photo Sentinel Tribune
comments powered by Disqus