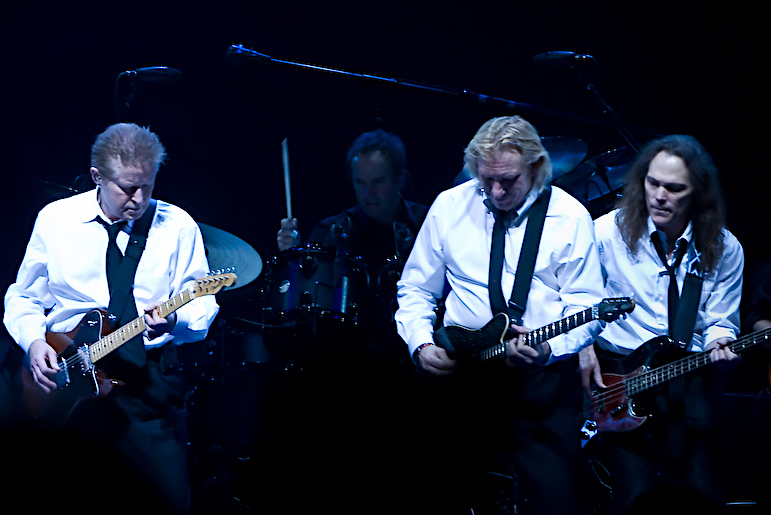 The Eagles. From left: Don Henley, Joe Walsh and Timothy B. Schmit.

The Eagles returning to Buffalo

Thu, Dec 7th 2017 09:35 am
One of the most successful American rock bands of all time will return to Buffalo in the summer of 2018
The Eagles - Don Henley, Joe Walsh and Timothy B. Schmit, with Vince Gill and Deacon Frey - will perform inside KeyBank Center at 8 p.m. Saturday, July 14.
The venue website states tickets will go on sale at 10 a.m. Friday, Dec. 15, and cost between $99.50 and $229.50. Tickets will be available at the KeyBank Center box office (One Seymour H. Knox III Plaza), online at www.tickets.com, or by calling 888-223-6000. Also, a random handbill policy will be in effect. A limited number of handbills are available now.
Members of the Rock and Roll Hall of Fame, The Eagles have sold more than 120 million albums worldwide (six going to No. 1) behind five No. 1 singles and a plethora of additional hits.
The band's website states, "Due to the overwhelming response for the announced Eagles' 2018 tour dates, 13 more 'An Evening with the Eagles' concerts have been added to the band's 2018 tour, which kicks off on March 12 in Indianapolis, Indiana."
For more information, click HERE or visit https://eagles.com/.
•••••
Photo by Steve Alexander (originally posted to Flickr as Eagles) [CC BY-SA 2.0 (https://creativecommons.org/licenses/by-sa/2.0)], via Wikimedia Commons; https://commons.wikimedia.org/wiki/File%3AEagles.jpg
Categories
Entertainment NFP Top Entertainment News Top News