Ghosts might be anything but fiction at Lewiston Public Library

Wed, Dec 6th 2017 05:50 pm
By Gianna Lopez
Rumor has it the Lewiston Public Library is haunted.
Having been established in 1900, relocated to 505 Center St., in 1961, and relocated again in 1990 to 305 S. Eighth St., the library has accumulated a great deal of historical value. This makes it the ideal place to associate a good ghost story with. What many people do not know is that there has been real accounts of spiritual activity at the library.
On various occasions, patrons have approached staff members about peculiar things they have seen, felt or heard. In 2016, a man told an employee he saw a "shadowy figure" move through the shelves of the adult, nonfiction section and then it vanished.
"We are often told by patrons that they feel a presence with them in the mystery section, but they are always find that they are alone," Michelle Kratts said. 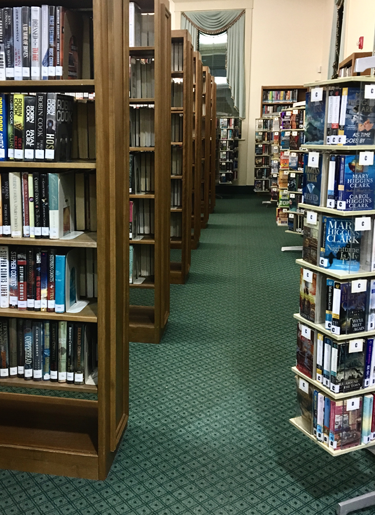 The mystery section of the Lewiston Public Library.
Kratts is the library's genealogist. She is also an author who has published multiple books, including "Haunted: True Tales of Niagara" and "The Missed."
In her novel, "Haunted: True Tales of Niagara," Kratts dedicates an entire section to the Lewiston Public Library. In this portion of the novel, Kratts gives a detailed account of all the spiritual activity that has occurred, and been recorded, over the years. Kratts has also compiled a list of accounts that have occurred after her book was published.
The following are some experiences Kratts described.
•"One night during our book club, several of the women suddenly flashed their eyes to one particular area. They saw a shadowy figure, similar to what the man saw, move across the room and then disappear."
• "Once I left the library in a panic as I felt I was not alone. On my way out I heard a noise follow me out, as if someone in a heavy long dress was following me. I could hear the 'swoosh' of fabric before the door closed behind me."
• "A former maintenance worker has seen a female apparition in old fashioned clothes."
• "The staff and some patrons have noticed a strong smell of perfume appearing out of nowhere."
• "Young volunteers have seen a female apparition appear in the front hallway and then disappear."
• "Staff members will hear knocking on doors when no one is on the other side and someone whispering their names when no one is there."
Amy Wall, a staff member for the children's section of the library, heard someone whisper to her, "Don't forget what they have taught you."
"We also had one of our reading therapy dogs, Raven, 'follow the lady ghost.' He stopped in front of the grandfather clock and sat patiently before it. This clock was donated to the library in honor of a former librarian," Kratts said.
She herself has had experiences with the spirits of the Lewiston Public Library on numerous occasions.
"One of the most frightening experiences I have ever had involved a time that I was alone in the building. Was working on the computer when, all of a sudden, I heard footsteps in the front hallway. I started to get scared thinking that someone was in there with me, and I was all alone. The footsteps were getting louder, so I waited thinking that I was going to see something, but all of a sudden they stopped. Then the inner doors of the front area began to open and close and they did not stop. I became brave and walked over to the doors and said 'Stop!' Everything stopped," Kratts said.
Another occurrence involved an old co-worker. Kratts recounted how, on this day, she was sitting at her desk doing work on her computer. Her co-worker was watching her from the copy machine when, all of a sudden, she screamed. She saw a woman behind Michelle. She thought the lady was working with her, which is common in Kratts' line of work. She described how the lady was watching everything Kratts was doing. She was plain as day, then all of a sudden she vanished into thin air.
"She said 'It was a lady and she had a raincoat on. It was tan.' Then she pointed to the countertops around our desks. She said the countertops were the exact color of the raincoat that the woman was wearing," Kratts said.
Kratts described how she was feeling off on the day of that occurrence, and that all day she was smelling perfume that she did not recognize as her own or anyone of her co-workers.' Kratts also explained how, in the week following that instance, another co-worker came to her in a distressed state.
"She said to me 'There was a lady that disappeared. I was putting books away and a lady walked down the aisle and I never saw her come out.' She said that it was a young lady and that she had a raincoat on. Sure enough, she pointed to the counter. She said 'It was like this color.' They both pointed to the counters," Kratts said. 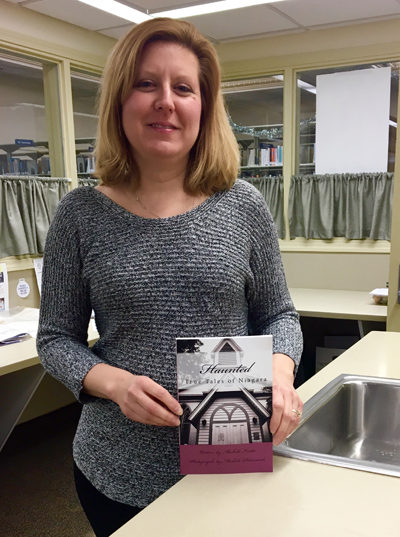 Michelle Kratts holds her novel, "Haunted: True Tales of Niagara." Pictured with her are the countertops her co-workers referenced.
After doing some research, Kratts discovered a former librarian of the Lewiston Public Library, in the 1970s, whom they believe is behind some of the spiritual activity. Her children, who donated a grandfather clock and a display case to the library in her honor, believe their mother's spirit is present in the library.
The story of this former librarian was that loved her job, and she had just finished her schooling to become a director. When she was told she would no longer be able to work at the library, for reasons that cannot be disclosed, she proceeded to write letters to the staff.
"Goodbye, I don't ever want to leave the library, but I have to," she wrote.
The librarian committed suicide in Niagara Falls.
Those who knew this librarian can confirm she was always wearing her tan raincoat. It is also known that she was forbidden to wear perfume. However, she kept a bottle of perfume at the library and would spray some on throughout the day. This would explain why staff members and patrons have noticed the smell of perfume, and why Kratts was smelling perfume on and around her on the day of that first occurrence.
The employees of the library say the apparition is a friendly spirit. If she is, in fact, present in the library, she is in a place that she loved and is hopefully at peace.
She is not, however, the only spirit thought to be present in the library. In Kratts' novel, she retells the time that paranormal investigators inspected the library.
In 2008, Kratts reached out to Niagara Falls Paranormal. The group is based in the Cataract City and provides help to those with paranormal issues. In the Niagara Falls Paranormal's mission statement, it's stated the members "also provide knowledge to those who simply question their world and want to discover what may lie beneath what we often perceive as reality."
"I was stunned by the professionalism of Kimmy Silvaroli and NF Paranormal. They respected our property, conducted a serious and thorough investigation, and had a good time while doing it," Kratts said.
One of the staff members, Wall, is currently a member of the group, though she was not present at the time of the investigation.
When NF Paranormal inspected the library, it did not find much. However, a few weeks later, it discovered a strange voice on an EVP recording. It uttered, "I'm so tired." Footsteps and the rustling of books could be heard, too. This particular recording took place in the children's section of the library.
The Rev. Tim Shaw, a paranormal investigator who has been featured on shows such as "Ghost Hunters," "Ghost Lab" and "Paranormal Lockdown," has inspected the Lewiston Public Library on two separate occasions. The children's area is where he has noticed a lot of activity.
On his most recent investigation of the library, Shaw recalled how the room turned cold and the EMF levels spiked near a certain shelf. He that he reached his hand through the shelf and felt something similar to the feeling of cotton candy. Those with him felt it, too.
"I have crazy feelings in the library. I feel like I am walking through a wall of static electricity. I can feel touches on my arm in the children's area and have seen a shadow being or mass near one of the shelves up front," Shaw said.
Many people may read this and be blown away by what is happening in the (seemingly) docile Lewiston Public Library. Many people will not believe it - thinking ghosts do not exist.
But Kratts concluded, "Author Mary Roach once wrote: No, you cannot prove there are ghosts yet, but you cannot prove that there are not."
Categories
NUsUnlimited NUsUnlimited Side Story