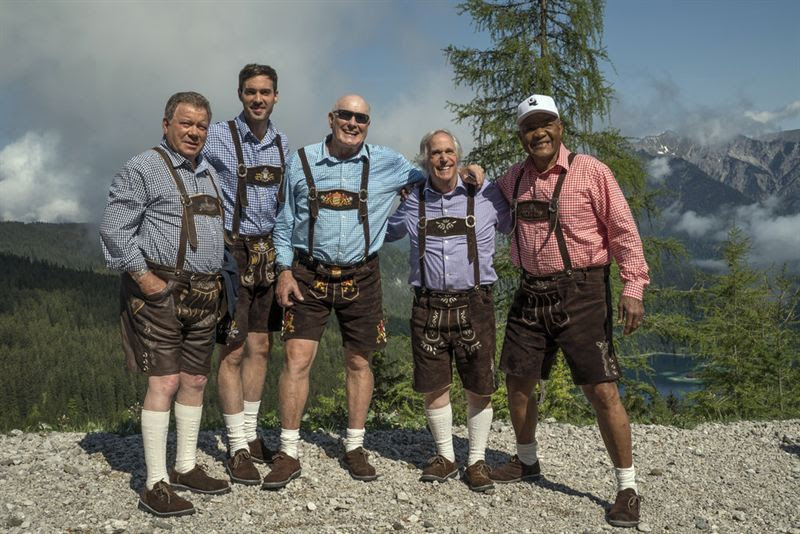 Tue, Nov 28th 2017 04:50 pm
More comedy & adventure Jan. 1 with special preview Dec. 11
Henry Winkler, William Shatner, Terry Bradshaw, George Foreman & comedian Jeff Dye visit Munich, Berlin, Lithuania, Sweden, Barcelona, Madrid & Morocco in comedy adventure series
NBC's hit series "Better Late Than Never" is back for season two with more fun, comedy and adventure as the five globe-trotting stars - Henry Winkler, William Shatner, George Foreman, Terry Bradshaw and comedian Jeff Dye - set off on an entertaining journey to Munich, Berlin, Lithuania, Sweden, Barcelona, Madrid and Morocco.
The two-hour season two premiere will air Monday, Jan. 1, 2018 (9-11 p.m. ET/PT), with a special preview episode slated for Monday, Dec. 11 (10-11 p.m.), following "The Voice." The series will move to its normal 9-10 p.m. timeslot beginning Monday, Jan. 8.
"Better Late Than Never" was the No. 1 news series in the summer of 2016 on the "Big 4" networks in both 18-49 and total viewers.
" 'Better Late Than Never' has given me the opportunity of a lifetime to travel all over the world with four incredible guys," said Winkler, who also executive produces. "I can't wait for viewers to join us for season two and experience all the laughs and adventures we have in each of the spectacular cities we visited."
Navigating their way through seven cities and five countries, the five friends will immerse themselves in the culture, customs and traditions of each new destination. They will sample crazy culinary delicacies, participate in Oktoberfest in Munich, celebrate World Pride Day, ride camels in the middle of the Sahara Desert and face off against a bull in the oldest matador ring in Madrid.
Trip highlights also include meeting popular ABBA member Björn Ulvaeus in Sweden and joining him for a surprise performance for hundreds of adoring fans, exploring the African gateway city of Morocco by motorbike, leaving their mark on the historic Berlin Wall, parasailing in Barcelona and much more.
Comedy abounds, from the five getting lost in Russia, Dye helping Bradshaw get "beach ready" in Barcelona with a body wax, picnicking in a park in Munich and recreating their own "Julie Andrews - The Hills Are Alive" moment from the iconic scene in "The Sound of Music."
Their international travels also include moving and heartfelt moments as a few cast members reconnect with their pasts, from Winkler retracing the path of family members in Berlin, some of whom were killed in Auschwitz, to Foreman's emotional meeting with the Lithuanian family of the man who launched his legendary career.
Special guest stars, including David Hasselhoff and Al Roker, as well as other surprises add to the fun as the five men experience incredible adventure, engaging camaraderie and unique destinations around the world.
Categories
Entertainment OYT