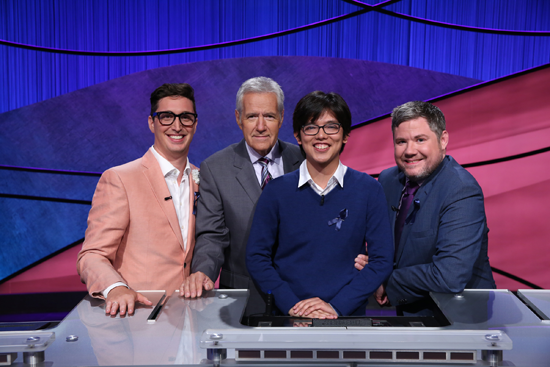 Who won 'Jeopardy' Tournament of Champions?

Fri, Nov 17th 2017 08:05 pm
Buzzy Cohen wins 'Jeopardy!' Tournament of Champions, claims $250,000 grand prize
Alan Lin finishes second; Austin Rogers places third
Buzzy Cohen came from behind to win the "Jeopardy!" Tournament of Champions presented by Consumer Cellular on Friday, besting Alan Lin and Austin Rogers in the second game of the two-day final match. Cohen, a 32-year-old music executive from Los Angeles, claimed the $250,000 grand prize; Alan Lin, a 26-year-old software engineer from Riverside, California, earned $100,000 for his second-place finish, while Austin Rogers, a 38-year-old bartender from New York City placed third and took home $50,000.
VIDEO: "Jeopardy!" Tournament of Champions Finals Recap
Cohen had a lot of ground to make up after finishing with $0 in Game 1 of the finals, which aired Thursday.
"Going backstage after Game 1 there was definitely a little pit in my stomach at first," Cohen said. "I was consoling myself saying, 'Alright, well you won $50K, that's nothing to slouch at.' A few folks on the crew were trying to help me not get too down, but after a little moment I just said 'Well, you can't have a Cinderella story if you're already in first.' I was kind of joking, but I think it helped me reframe the situation to my advantage."
A big Daily Double wager in the "Double Jeopardy!" round was the turning point for Cohen, who wagered everything he had - $10,800 - on a clue in "The Body Human" category.
"Even in the first round of the second final game I think I was (still) in third place, but then I caught fire ... moving into first place by the time I hit the 'Daily Double,' " Cohen said. "It was in a category that we hadn't been in yet, so there was a big question mark, but I knew I had to make it a true 'Daily Double.' When I got it right, I knew that I was back in this competition and just did my best to get all the way home."
Cohen, who is discussing with his wife how to spend his $250,000 grand prize, said winning a quarter million dollars is "unbelievable."
"The money is certainly incredible, but for me it's more that I'm now in an even more elite group among the already elite world of 'Jeopardy!' champs," he said. "I'm just grateful to be a part of 'Jeopardy!' history, and I had such a blast doing it." 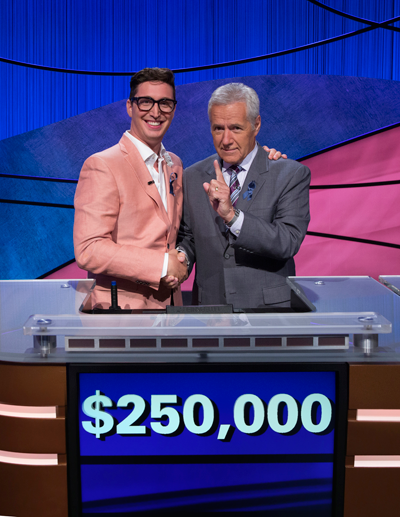 Buzzy Cohen
Alan Lin, who finished second, went into the finals with decisive quarterfinal and semifinal victories under his belt.
"I was incredibly nervous coming into the tournament, not sure that I would even get past the quarterfinals," Lin said. "Austin (Rogers) especially was a big unknown. All I knew is that he had won 12 games and a lot of money, so when I heard I was going up against him in the first round, my goal was honestly just shooting for a wild-card spot. But then I think I played the best game of 'Jeopardy!' I've ever played and got the lock game, which really helped my confidence, though that confidence promptly deserted me the next day."
Lin faced off against Rogers twice more over the course of the two-day final.
"I had already beaten Austin, so I was no longer afraid of him, which is not to say I thought I would be able to shut him out in the same way again, but, going in, I knew that he had his weaknesses," he said. "Buzzy is strong and consistent, so between the three of us, I knew it was going to be a very competitive match. I was also thinking that I would be going up against two of the biggest personalities we've had on 'Jeopardy!' in the past few years. I didn't want to be the boring one!"
Having just started graduate school, Lin said his $100,000 second-place prize money "means (he) won't have to eat ramen five nights a week like other graduate students." 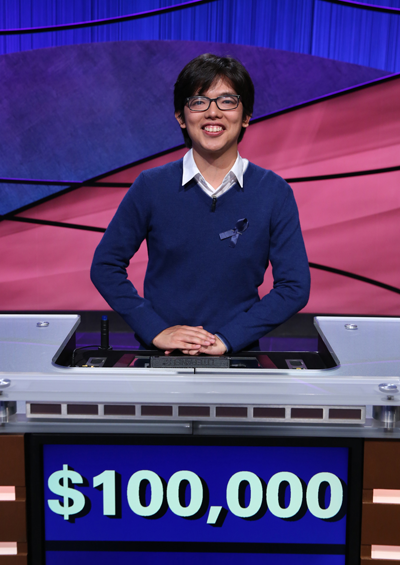 Alan Lin
For Rogers, who finished third, the most challenging aspect of the Tournament of Champions was the increased importance of being fast on the buzzer.
"Buzzer, buzzer, buzzer ... everyone was so good at it. I expected an elevated competition vis-à-vis the regular season competition, but the caliber and level of gameplay exhibited by everyone else was magnitudes better," Rogers said. "I never anticipated a cakewalk, but I also never anticipated that each individual player would be so vastly superior to regular season opponents."
Still, Rogers said that the highlight of the experience was "having fun with the game."
"We were all champions already, so any outcome was just gravy," Rogers said. "While sitting for lunch, Alan, Buzzy and I said 'Hey - all of us already have $50,000 guaranteed - so who cares?' " 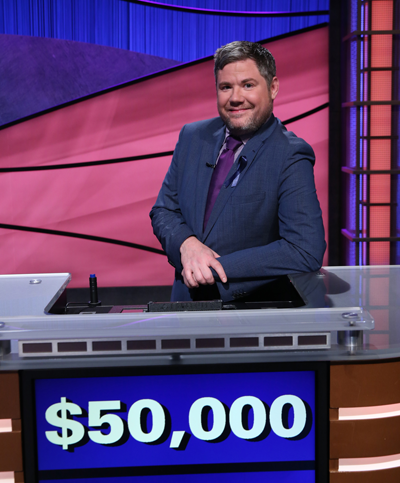 Austin Rogers
"Jeopardy!", America's Favorite Quiz Show, and its host, Alex Trebek, are in their 34th season in syndication. With 23 million viewers each week, "Jeopardy!" is the top-rated quiz show on television, and has won several awards and distinctions over the course of its 30-plus years on the air, including the 2017 Emmy for Outstanding Game Show. The show holds a Guinness World Records record for the most Emmy Awards won by a TV game show (34 Emmys); it is also the recipient of a 2011 Peabody Award.
For more information, visit Jeopardy.com.
Categories
Entertainment OYT