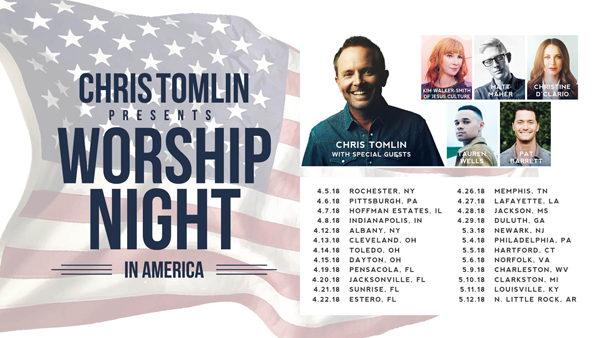 Mon, Nov 13th 2017 06:15 pm
Event seeks to unite church in worship and prayer; featuring Tomlin, Kim Walker Smith of Jesus Culture, Matt Maher, Christine D'Clario, Tauren Wells, Pat Barrett
Grammy Award-winner Chris Tomlin continues to work to bring the church together in unity and prayer with his "Worship Night In America" (WNIA) tour. It kicks off again April 5, 2018. Special guests include Kim Walker Smith of Jesus Culture, Matt Maher, Christine D'Clario, Tauren Wells, and Pat Barrett. The tour will hit 24 markets across the U.S., including Rochester, Chicago, Indianapolis, Atlanta and Philadelphia.
"It is powerful when all streams of the church come together in an act of unity to worship and pray. ... That's the heart behind 2018's 'WNIA Tour.' It's a picture of God's kingdom together, and the sound of thousands and thousands of voices pouring out his praise," Tomlin said. "I pray these nights are filled with revival and restoration as we all join together proclaiming one name. As the scriptures say, 'Lord I have heard of your fame, I stand in awe of your deeds ... renew them in our day.'"
Tomlin's 2018 "WNIA" follows his 2017 tour, which made 24 stops in arenas with sellouts across the country, including Nashville, where Tomlin made history as the largest ticketed Christian concert at Bridgestone Arena to date.
This feat came amidst a massive year for Tomlin. Just last fall, he became the first Christian artist to receive the SoundExchange Digital Radio Award, recognizing more than 1 billion digital radio plays. Justin Timberlake, Garth Brooks and Pitbull are the only other artists to have received this award. Following this success, Tomlin filled the iconic Red Rocks Amphitheatre for back-to-back nights in September - he was the first CCM artist to play the historic venue two nights in a row.
Tickets for the "Worship Night In America" tour will be available at christomlin.com starting Nov 17 at 10 a.m. local time. As a special offer to early ticket-buyers, a 20 percent promo code will be active Friday, 10 a.m. local time, through Monday, Nov. 20, at 11:59 p.m. local time (code: "INSIDER").
"WNIA" hits Rochester on April 5. All dates are subject to change. For the latest information, visit christomlin.com.
Likely "the most often sung artist anywhere" according to TIME Magazine, Tomlin is among the most influential artists in Christian music. Selling over 7.5 million albums and 10.7 million digital tracks, Tomlin has 16 No. 1 radio singles, a Grammy Award, three Billboard Music Awards, two Platinum and five Gold albums to his name.
Tomlin's latest album, "Never Lose Sight," along with his new book, "Holy Roar 7 Words That Will Change the Way You Worship," are available now.
Connect with Chris Tomlin:
Categories
Entertainment On Stage feature Top Entertainment News