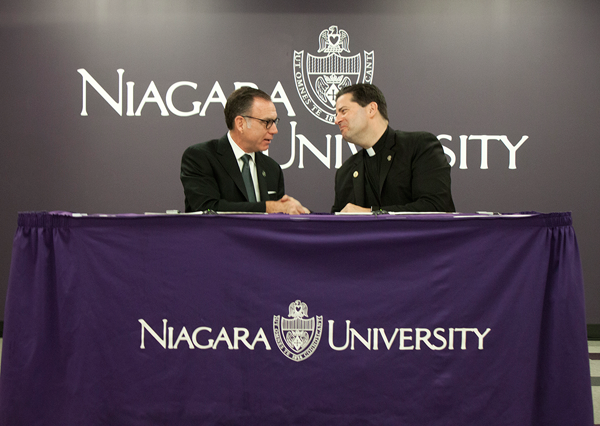 Fri, Nov 3rd 2017 07:15 pm
International students attending Lewiston-Porter High School will soon have the opportunity to add collegiate life to their American experience, thanks to a partnership formalized Friday with Niagara University.
Paul J. Casseri, superintendent of the Lewiston-Porter Central School District, and the Rev. James J. Maher, C.M., president of Niagara University, signed a memorandum of understanding that states that international exchange students attending Lew-Port will be housed in NU residence halls during their stay in the United States.
As a result, seven Lew-Port students will begin living at NU in January.
"This newest component of our longstanding partnership with Lewiston-Porter reflects our vision to fully diversify the student experience, both for the young people studying on our campus and for the students coming from overseas," Maher said. "By embracing the richness of culture, thought and language of international communities, we extend our educational and social mission to graduate citizens of the world."
"The establishment of this housing opportunity for international students coming to Lewiston-Porter furthers the tremendous collaboration that has been created between our school district and Niagara University," said Casseri, who will travel to China next week to meet with partner institutions in Tianjin. "The program we have established at Lewiston-Porter is one of the most creative and innovative in the state and the country. With a permanent presence on the Niagara University campus, I see our program developing even further. It is a true win-win for both organizations. The partnership with Niagara will only serve to enhance our standing with students in China and around the world."
Casseri, in 2014, initiated an international student learning opportunity that actively seeks F-1 Visa for students from China to study at Lewiston-Porter for their senior year, gain a New York State Regents diploma and advance to a college or university in the United States. Since the development of that program, 30 full-time students from Tianjin No 2 High School have participated.
Previously, the international students would stay with host families in the district; while this was an enriching circumstance for these students, the involvement at NU will significantly impact their educational experience in America.
As a result of the agreement signed Friday, the students will have guaranteed accommodations at Niagara, which include room and board. While not technically NU students, they will have the opportunity to experience collegiate life, such as theatrical and sporting events, along with residence hall living.
Andrew Sharpe, a Lew-Port social studies teacher who has experience teaching in China, will live in the Niagara residence hall among the students. NU community advisors will also be properly trained to assist them in all facets of this unique partnership.
Buses provided by the school district will transport international students to and from Lew-Port.
The recruitment of international students and faculty has been a priority for Maher since he became Niagara's president in March 2013. At his urging, the board of trustees approved the creation of an Office of International Relations in July of that year.
Niagara has since made great strides in diversifying its student body. The Catholic and Vincentian institution currently enrolls 158 international undergraduate students in its U.S.-based programs, a 25 percent increase since 2012, which has contributed to a more well-rounded learning environment and made a significant economic impact on the Western New York region.
A 2015-16 study by the National Association of International Educators ranked Niagara University as the top college or university in the 27th Congressional district in terms of the economic impact derived from international students. Its $14 million benefit to the region from these students was more than triple the next highest-ranked institution.
In January 2016, Niagara University established the Edward A. Brennan Center for Language, Culture and Leadership, an on-campus center that builds interdisciplinary connections between teaching and learning to augment services to international students and their families.
To learn more about Niagara University, visit www.niagara.edu.
Additional information on the Lewiston-Porter Central School District can be found at www.lew-port.com.
Categories
Home feature NFP