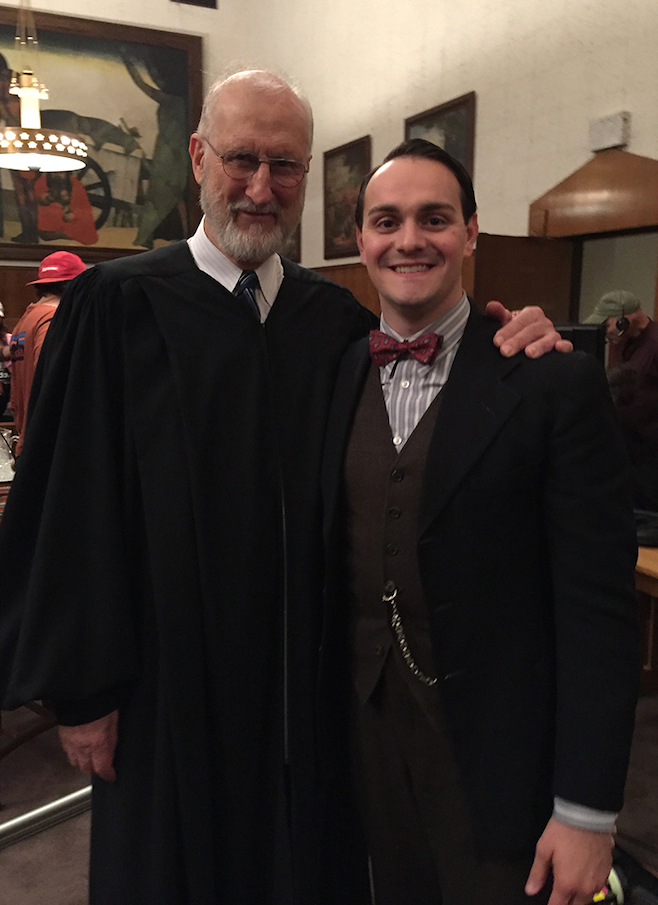 Niagara University artist-in-residence Adriano Gatto is pictured with actor James Cromwell on the set of "Marshall."

Thu, Oct 12th 2017 11:55 am
The Western New York region plays a starring role in the Hollywood biopic on Supreme Court Justice Thurgood Marshall, which hits theaters nationwide this Friday. So, too, do three Niagara University theater faculty members, who appear in key "Marshall" scenes alongside high-profile actors Chadwick Boseman, Josh Gad and Kate Hudson.
Lecturer Josie DiVincenzo (Ruthie), artist-in-residence, Adriano Gatto (Bridgeport Superior Court clerk) and associate professor Doug Zschiegner (prosecution team) represent Niagara in the movie. Zschiegner can be spotted to the left of Boseman and well-known actor Dan Stevens on one of the show's promotional posters.
Much of the movie was shot in several Buffalo-area locations.
"Working on 'Marshall' was an absolute dream and one of the most inspiring projects I have worked on to date in my career," said Gatto, who engaged in lengthy personal conversations with actor James Cromwell since the two spent a great deal of time together on the courtroom set. "We often perceive film as being glorious, and it certainly is, but not many people are aware of the incredible amount of talented, experienced and innovative people who were involved with this picture. Each scene takes a village, and it was inspiring watching the crew set up shot after shot after shot in the shortest amount of time. It's a machine, and if one part is faulty, the whole thing can come down."
"Sitting at the prosecutor's table in the middle of the courtroom for about 90 hours was a huge learning experience," Zschiegner added. "Hearing the director's coaching and watching the particularly diverse styles of acting offered a lot of insight into film techniques."
In addition to gaining practical experience that they can bring back to the classroom at Niagara, Gatto and Zschiegner both noted that having the ability to share stories about their time with popular actors really resonates with students.
"The fact that three of our NU faculty/staff were cast as principals and featured in this film is a testament to the level of excellence at which we operate at Niagara, and exemplifies the very high standards we bring to our students," Gatto said.
Niagara University offers BFA programs in three concentrations: performance, design and production, and theater specializations. To learn more, visit www.niagara.edu/theatre.
Categories
Entertainment NFP Top News Features