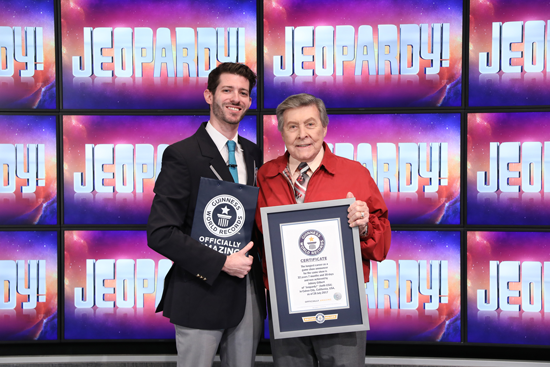 Thu, Sep 28th 2017 04:50 pm
In an episode airing today, "Jeopardy!" will announce Johnny Gilbert, the "Voice of 'Jeopardy!' " has set a new Guinness World Records for longest career as a game show announcer for a single show. Since the syndicated debut in 1984 of "Jeopardy! ", Gilbert's iconic "This ... is ... Jeopardy!" show opening has welcomed millions of fans as they tune in each day.
"I am incredibly honored that my work on 'Jeopardy!' has been recognized with a Guinness World Record," Gilbert said. "For more than 30 years, I've looked forward to coming to work every day. "Jeopardy!'s" producers, crew, and contestants make every episode new and exciting and I love being a part of it."
Gilbert claimed the record by serving as "Jeopardy!'s" announcer for 32 years, 7 months, and 30 days, as of the tape date for today's episode, and on July 28 (the last episode of "Jeopardy!" season 33), his record was officially adjudicated; it now extends to 32 years, 321 days - and counting.
Gilbert and host Alex Trebek share the distinction of being the show's two longest-serving employees - only the two of them have been there since the very beginning.
WATCH:
"It's remarkable that, after all these years, Johnny makes the show sound fresh," "Jeopardy!" Executive Producer Harry Friedman said. "Even after more than six decades in show business, his natural enthusiasm still creates an exciting atmosphere for contestants and viewers alike, and it's a pleasure to work with him."
Gilbert began his professional career as a nightclub singer and was originally trained by an opera teacher. While still in high school, he started his career as a singer with a dance band in his hometown of Newport News, Virginia. By the time Gilbert graduated, he had become a comedian, master of ceremonies, and singer in a Jacksonville, Florida, nightclub. Gilbert honed his skills as a full-time nightclub performer touring as a singing emcee, entertaining coast-to-coast from Bimbo's in San Francisco to the Hotel Bradford in Boston.
He went on to tour with the U.S. Army, where he received his first television assignment as an emcee. He then went on to New York, where he became host of ABC-TV's "Music Bingo," and then on to Los Angeles where he was master of ceremonies of KTLA-TV's "Words and Music." During this time, Gilbert was introduced to movie audiences through a role in "Gidget Goes Hawaiian."
Before he found his calling on "Jeopardy!", Gilbert was the announcer for episodes of several other game shows, including "The $25,000 Pyramid," "The Joker's Wild," "Tic-Tac-Dough," "Anything for Money," "Every Second Counts" and "The Price is Right." He also served as Dinah Shore's announcer on her popular syndicated daily talk show throughout the 1970s and 1980s.
These episodes do not count toward his Guinness World Records record.
"Jeopardy!" is "America's Favorite Quiz Show." Alongside host Trebek, it's recently begun its 34th season in syndication. With 23 million viewers each week, "Jeopardy!" is the top-rated quiz show on television, and has won several awards and distinctions over the course of its 30-plus years on the air, including the 2017 Emmy for Outstanding Game Show. In fact, the show holds a Guinness World Records record for the most Emmy Awards won by a TV game show (34 Emmys); it is also the recipient of a 2011 Peabody Award.
For more information, visit Jeopardy.com.
Categories
Entertainment Entertainment feature