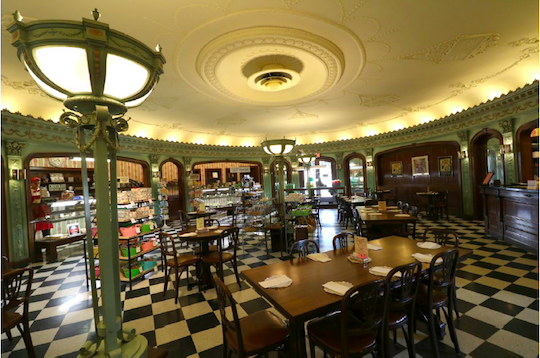 Wed, Sep 27th 2017 09:30 am
$250,000 Buffalo Billion project restores Buffalo candy store, drawing more people to iconic attraction
AnchorEmpire State Development on Tuesday announced the completion of $250,000 in improvements to revitalize key features of the nearly 100-year-old Parkside Candy Shoppe in Buffalo, enhancing the overall visitor experience.
Part of Gov. Andrew Cuomo's Buffalo Billion initiative announced in 2015, the project was made possible by a $125,000 Better Buffalo Fund grant awarded to the University District Community Development Association by Empire State Development and New York State Homes and Community Renewal. The grant allowed the UDCDA to assist with an extensive restoration of both the interior and exterior of the historic landmark, which was recently listed on the National Register of Historic Places.
"As part of the Buffalo Billion, the Better Buffalo Fund is breathing new life into neighborhoods that are the foundation of the new Buffalo and the Western New York economic renaissance," said Lt. Gov. Kathy Hochul, who attended the ceremony. "Parkside Candy has been a fixture in this region for nearly a century and, through our partnership, we have preserved one of the pillars of the University Heights neighborhood for generations to come."
ESD President, CEO and Commissioner Howard Zemsky said, "The restoration of this historic candy business creates a new chapter of economic success, and modernizes a company that has been a Western New York favorite for close to a hundred years."
RuthAnne Visnauskas, commissioner of New York State Homes and Community Renewal, said, "Congratulations to Parkside Candy Shoppe and the entire City of Buffalo on the extraordinary restoration of this iconic local treasure. HCR partnered with Empire State Development to secure a $125,000 Better Buffalo Fund grant for this project, and we are pleased to see the amazing results as one of the oldest and most prized small businesses in the city is brought back to life for residents and visitors to enjoy."
Work on the iconic building started in January of this year thanks to a project team consisting of Sutton Architecture, SLR Contracting and Preservation Studios. Work included painting and plaster restoration, new checkerboard flooring, restored wooden display cases, and new lighting in the retail space. Two upstairs apartments have been completely remodeled, with updated bathrooms and kitchens, further adding to the number of units available along the Main Street transit corridor. The apartments have also retained much of the charm that comes with a nearly 100-year-old building with original hardwood floors, trim, and fixtures throughout.
The most noticeable work to neighborhood residents and business patrons alike, however, has been the extensive exterior restoration. This included cleaning, repairing and repointing the building's brick and masonry, installation of new retractable awnings, and the replacement of the business's signature neon with a brand-new replica sign fabricated locally by All American Sign WNY. The installation of an eight-foot wayfinding sign outside the store that details the history of Parkside Candy, the University Heights, and provides pedestrians with a neighborhood walking map, was also included as part of the project.
As one of the oldest continuously operating small businesses in the neighborhood, the building dates back to 1927 and was designed by local architect G. Morton Wolfe. Originally owned by the Kaiser family, the retail store and adjacent factory building were built as the business outgrew its original space in the Parkside neighborhood. The current owner, Philip Buffamonte, purchased the business in 1981. Buffamonte has committed to returning the building to its original grandeur, and said he sees a fully restored Parkside Candy not only as a catalyst for boosting business, but also strengthening Main Street as the vibrant and walkable heart of the neighborhood.
Buffamonte said, "Parkside Candy is proud to be restored to its original grandeur. Our revitalized candy shop is receiving rave reviews from long-time patrons and the new customers attracted by the beautiful new interior and exterior renovations. We offer our appreciation to Gov. Cuomo and the Better Buffalo Fund for helping revitalized a national historic landmark that is a treasure to the community and a growing culinary tourism attraction."
Parkside Candy currently employs approximately 36 people who work as candy makers, customer service agents, waitresses, mechanics and shipping employees.
Roseann Scibilia, executive director of the UDCDA, said, "Parkside Candy tells a story of our collective history as a neighborhood, a city and a region - a story that for many decades has gone untold. Thanks to this major restoration, Parkside Candy is helping to write a new chapter in our collective history, and, with it, encourage a new generation of entrepreneurs and community advocates to locate and invest in our community."
Sutton Architecture worked with the UDCDA to restore Parkside Candy to its original style.
For more information about Parkside Candy, visit: https://parksidecandy.com/.
Categories
Food NFP Top News Features