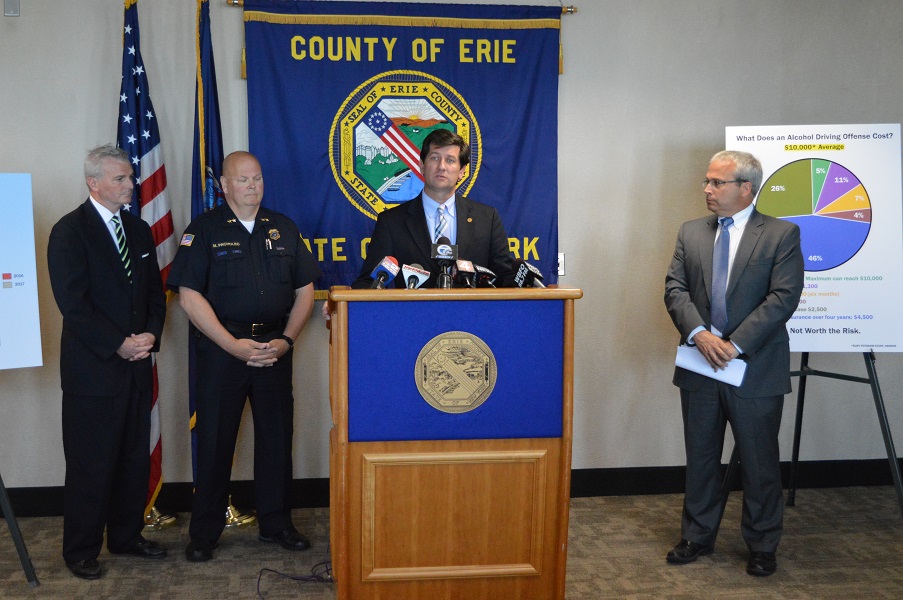 Tue, Sep 26th 2017 12:00 pm
Drop in DWI arrests seen locally and statewide; severe consequences, ride sharing, strict enforcement seen as contributing to decline
Erie County Executive Mark C. Poloncarz was joined Monday by Commissioner of Central Police Services James Jancewicz, Director of the Erie County STOP-DWI Office John Sullivan, and Chief of the Orchard Park Police Department Mark Pacholec to review driving while intoxicated incidents during the summer months across Erie County. Data from the STOP-DWI office indicates DWI arrests for the period of July 3 through Sept. 17 are down from last year.
In 2016, there were 597 DWI arrests in this period while, in 2017, there were 532. This represents a decrease of 10.8 percent during the period, with much of the decline occurring since Aug. 20.
"There are a number of factors that influence incidents of driving while intoxicated, and many tools to use in decreasing the number of offenses even further," Poloncarz said. "Vigilant work by law enforcement and our STOP-DWI office and a greater understanding by the public of the severe consequences for DWI offenses are at the forefront of keeping impaired drivers from getting behind the wheel."
Arrests for DWI have declined, in general, since 2016, with the total year-to-date in 2017 down 4 percent from the same period in 2016 (1,932 arrests through mid-September as compared to 2,019 arrests in the same period in 2016).
Jancewicz said, "The decline in DWI incidence is good news and shows that, generally, people seem to be more aware of the dangers and consequences that drunk driving presents. However, we need to be constantly vigilant, always reinforcing the message of those dangers, and ready to prosecute those who choose to engage in this destructive behavior."
Sullivan added, "The combined effects of active police enforcement, harsh sanctions, and the availability of easy alternatives to drinking and driving are driving down DWI arrests and crashes. Responsive and sustained action by police and prosecutors will attempt to hold and improve on this momentum."
For more information on the Department of Central Police Services, visit http://www2.erie.gov/cps/; and on the STOP-DWI office, visit http://www2.erie.gov/cps/index.php?q=stop-dwi.
Categories
Dispatch Dispatch feature Home feature NFP