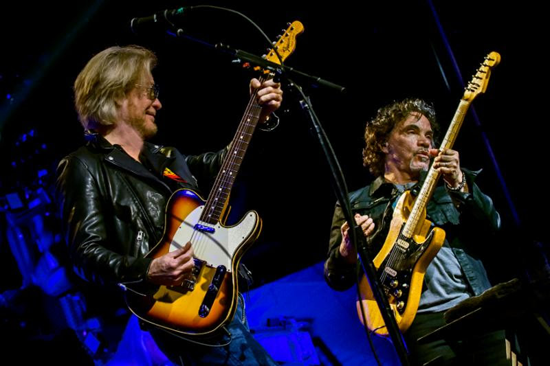 Fri, Sep 22nd 2017 06:30 pm
Daryl Hall & John Oates are embarking on a southern run of their successful North American tour, performing in Cedar Park, Sugar Land, Tuscaloosa and Jacksonville before wrapping up on Sept. 30 in Charleston at the North Charleston Coliseum.
Some cities on this southern run of tour dates were badly affected by both Hurricane Harvey and Hurricane Irma. Daryl Hall & John Oates will donate a portion of their ticket sales from select tour dates to the Red Cross to benefit those in need during this time.
"I know everyone has been experiencing hard times, bad luck and a lot of sadness. We'll try and do our share to help and also give some soulful cheer at the shows," Hall said.
"Hopefully our music will bring a small respite from the damages suffered during the hurricane and, more importantly, I'm hopeful that our contribution to the American Red Cross can help those in need," Oates said.
The American Red Cross stated, "Daryl Hall & John Oates are helping people affected by disasters like storms and other crises by making a gift to American Red Cross disaster relief. This gift enables the Red Cross to prepare for, respond to and help people recover from disasters big and small."
From the mid-'70s to the mid-'80s, the duo scored six No. 1 singles, including "Rich Girl" (also No. 1 R&B), "Kiss on My List," "Private Eyes," "I Can't Go For That (No Can Do)" (also No. 1 R&B), "Maneater" and "Out of Touch" from their six consecutive multiplatinum albums. The era would also produce an additional five top 10 singles: "Sara Smile," "One on One," "You Make My Dreams," "Say It Isn't So" and "Method of Modern Love." By 1987, the RIAA recognized Daryl Hall & John Oates as the No. 1-selling duo in music history, a record still held today.
On May 20, 2008, the duo was honored with the Icon Award during BMI's 56th annual Pop Awards. The award has previously gone to the Bee Gees, Crosby, Stills & Nash, Paul Simon, Brian Wilson, Willie Nelson, James Brown, Ray Davies, Carlos Santana and Dolly Parton.
In 2014, Daryl Hall & John Oates were inducted into the Rock & Roll Hall of Fame. 2017 finds Hall and Oates very much at the height of their powers making their own kind of soul, with a new generation of musicians recognizing not only their historic track record of success, but also their continuing influence and achievements.
Visit https://www.hallandoates.com/.
Categories
Entertainment Entertainment feature
comments powered by Disqus