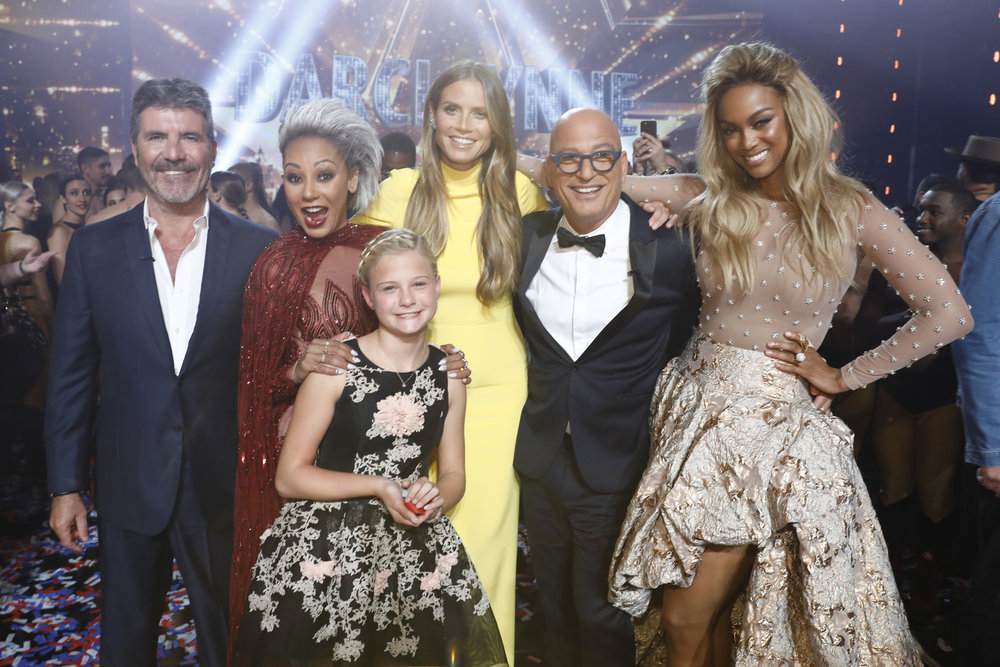 Thu, Sep 21st 2017 10:20 am
12-year-old singing ventriloquist Darci Lynne Farmer from Oklahoma City crowned winner of summer's No. 1 Show, NBC's 'America's Got Talent'
Darci Lynne wins $1 million grand prize; will headline 'America's Got Talent Live' Las Vegas stage show at Planet Hollywood Resort & Casino
The votes are in and America has crowned 12-year-old singing ventriloquist Darci Lynne Farmer from Oklahoma City, Oklahoma, as the season 12 winner of the most-watched season in the 12-year history of summer's No. 1 show, NBC's "America's Got Talent."
Darci Lynne received the most votes ever for a finale show in "AGT" history and won viewers over with her performance of the Beatles' classic "With a Little Help From My Friends" alongside her puppets, Oscar and Petunia. She faced tough competition with the other Top 10 finalists, including singer Evie Clair, dance group Diavolo, singer Chase Goehring, singer Angelica Hale, singer Mandy Harvey, comedian Preacher Lawson, dance group Light Balance, singer Kechi and animal act Sara and Hero.
Wednesday night's live telecast hit a three-year high in 18-49 and a six-year Tuesday high in total viewers.
This season of "America's Got Talent" concluded tonight at the Dolby Theatre in Hollywood with a star-studded live finale featuring performances by the 10 finalists along with Kelly Clarkson, Shania Twain, Derek Hough, James Arthur, Kevin Nealon, Jeff Dunham and season two winner Terry Fator.
In her audition earlier this season, Darci Lynne wowed Mel B and received her "Golden Buzzer" for her rendition of Ella Fitzgerald's "Summertime" with puppet Petunia. In 24 hours, her audition video amassed 105 million views on Facebook, and within 30 hours of broadcast she became the most socially viewed "AGT" performer in series history. Since then, Darci Lynne has received 306 million views to date across all social platforms, including Facebook, Twitter and YouTube.
Darci Lynne, who considers herself shy, began singing at 6 years old. Her mother entered her into a pageant in the hope that it would give her daughter confidence. After her first performance, Darci Lynne went on to win multiple talent contests and pageants by the age of 10. She was then inspired by a ventriloquist at a pageant and decided to give it a try. She has since won multiple state and national talent contests for ventriloquism and has appeared on TV around the world.
Due to her success as a ventriloquist, she recently gave up being a gymnast to pursue her love for performing.
Darci Lynne's other memorable performances this season included her rendition of the Jackson 5's "Who's Loving You" in the quarterfinals round alongside her puppet, Oscar. In the semifinals, she performed Aretha Franklin's hit song "Natural Woman," debuting her puppet Edna Doorknocker.
In addition to winning the $1 million grand prize, Darci Lynne will headline "America's Got Talent Live" inside the PH Showroom at Planet Hollywood Resort & Casino in Las Vegas on Friday, Nov. 3, and Saturday, Nov. 4, along with special season 12 guests: Angelica Hale, Light Balance and Preacher Lawson. Tickets for "America's Got Talent Live" at Planet Hollywood Resort & Casino in Las Vegas will go on sale at 10 a.m. PT Friday, Sept. 22. A special pre-sale will be held from 10 a.m. to 10 p.m. PT on Thursday, Sept. 21. Tickets can be purchased online at www.AGTvegas.com or by phone at 702-777-2782 or 855-234-7469.
Auditions for the next season of "America's Got Talent" are currently underway. Interested acts can submit an audition online or register for one of the upcoming audition cities at www.AGTAuditions.com. Open calls for season 13 of "America's Got Talent" will kick off in Orlando on Nov. 5 and will make the following stops throughout the country: Cincinnati on Nov. 14; Savannah, Georgia, on Nov. 19; Milwaukee on Dec. 3; Houston on Dec. 9; Las Vegas on Dec. 13; New York City on Dec. 17; Nashville on Jan. 13; and Los Angeles on Feb. 3. 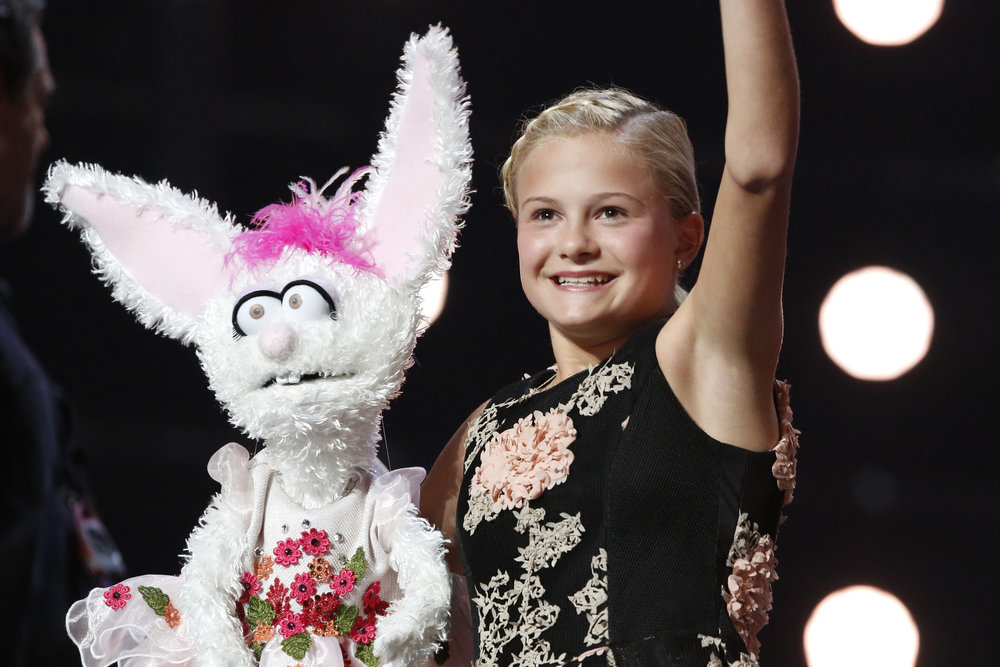 Darci Lynne (NBC photo)
In its 12th season, "America's Got Talent" delivered its most watched season ever, averaging 15.7 million viewers in "live plus seven day" averages from Nielsen Media Research for Tuesday and Wednesday originals, a 14 percent increase versus last summer. In adults 18-49, "AGT" is up year to year by 10 percent (3.4 vs. 3.1), making this its highest-rated season since 2013. For the full 2016-17 season, "AGT" is the No. 4 most-watched entertainment series on television, behind only "The Big Bang Theory," "NCIS" and "The Walking Dead."
On Tuesday of this week, "AGT's" performance finale grew versus the prior week by 30 percent in 18-49 rating (to a 3.0 from a 2.3) and 3.1 million persons, or 27 percent, in total viewers (14.7 million vs. 11.6 million). Heading into the season finale, those results represented the show's highest 18-49 rating in three years (since May 27, 2014, 3.0) and most-watched episode in six years (since July 5, 2011, 15.779 million).
In addition to seeing tremendous ratings growth in its 12th season, "AGT" has also set massive records across digital platforms, garnering more than 2.6 billion views across Facebook, YouTube and Twitter combined. Season 12's video views include 1.9 billion views on Facebook, 630 million views on YouTube and 81 million views on Twitter.
The "Got Talent" format has had more than 900 million global viewers since it began airing in 2006. "Got Talent" is entered in the Guinness World Records as the Most Successful Reality Television Format in history, with 70 local versions produced across Europe, Asia Pacific, the Middle East, Africa and the Americas. "America's Got Talent" has aired in more than 190 markets worldwide. "Britain's Got Talent" is the U.K.'s highest-rated entertainment show of the century and, in 2009, discovered global singing sensation Susan Boyle, who has sold 23 million records to date.
"America's Got Talent" was created by Simon Cowell and is co-produced by FremantleMedia North America and Syco Entertainment.
Fans can visit the official show site at http://www.nbc.com/agt.
For the latest "America's Got Talent" news, videos, and photos:
Categories
Entertainment OYT Top Entertainment News