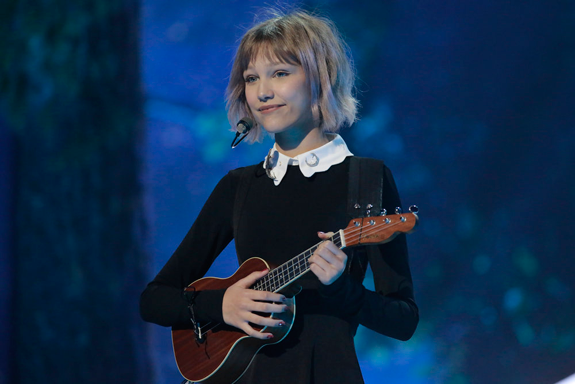 Fri, Sep 15th 2017 05:45 pm
Available for pre-order now; new song, 'So Much More Than This' out today
Singer/songwriter Grace VanderWaal has announced her debut album, "Just the Beginning," will release Friday, Nov. 3. The 12-track album features her infectious single "Moonlight," which has over 15 million combined video views and 18 million combined worldwide streams, along with the beat-driven track "Sick of Being Told" and the just-released song "So Much More Than This."
"Just the Beginning" is the follow-up to Grace's debut EP, "Perfectly Imperfect," which was the best-selling EP of 2016. The album is available for pre-order today, on the one-year anniversary of her winning "America's Got Talent." Fans can check out her new album trailer for a look into her amazing year.
In addition to writing all the songs on the album, Grace also worked with multiple award-winning producers and writers, including Ido Zmishlany (Shawn Mendes, Camila Cabello), Kinetics & One Love (Hailee Steinfeld), Greg Wells (Katy Perry, Adele), Gregg Wattenberg (Train, Phillips Phillips) and Sean Douglas (The Chainsmokers, Demi Lovato).
"So many people have worked so hard on this, and I'm beyond excited for everyone to hear it," Grace said. "I'm so grateful for all my supportive fans. They motivated me so much through this album. I really hope you all like it, and hopefully it's just the beginning."
The young star, who recently won the Radio Disney Music Award for The Freshest - Best New Artist, and the Teen Choice Award for Choice Next Big Thing, is set to embark on her sold-out U.S. headlining tour this fall. The "Just The Beginning Tour" kicks off in Los Angeles on Nov. 5 and will make stops in major cities across the U.S., including Chicago, Boston and New York City.
Following performances of "Moonlight" on "AGT" and "Live with Kelly and Ryan" this past month, Grace is set to take the stage on "The Ellen DeGeneres Show" for another performance of the single on Monday, Sept. 18.
When Grace captured the hearts of America and was crowned the champion of "AGT" season 11 last year, she wished to use her winnings to get her dream treehouse. Grace's dream will come true tonight on her episode of Animal Planet's "Treehouse Masters" at 9 p.m. ET. She'll receive not one, but two treehouses, each with its own unique style. The first treehouse is a boho chic clubhouse, complete with a loft and kitchenette, while across the way in another set of trees is a window-walled art studio.
The teen has announced her signing to IMG Models Worldwide. IMG will represent Grace for modeling.
Visit http://www.gracevanderwaal.com/.
Categories
Entertainment feature Top Entertainment News