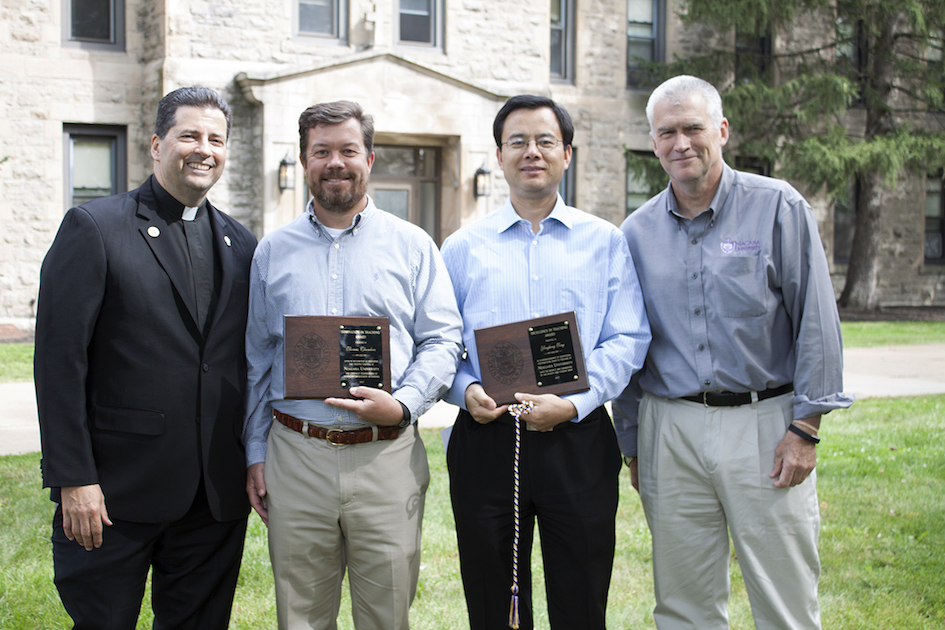 Drs. Thomas Chambers and Yonghong Tong are congratulated for winning the Innovation in Teaching Award and the Excellence in Teaching Award, respectively, by the Rev. James J. Maher, C.M., president of Niagara University, and Dr. Timothy Ireland, NU's provost.

Fri, Sep 1st 2017 07:40 pm
Niagara University's Office of Academic Affairs announced the selection of three distinguished faculty award winners during an event held Friday.
Dr. Thomas Chambers, professor of history and director of the university's liberal arts program, was presented with the 2017 Innovation in Teaching Award, while Dr. Yonghong Tong, assistant professor of computer and information sciences, received this year's Excellence in Teaching Award.
Candidates for the honors are nominated by their peers, with winners then chosen from a committee comprised of the awards' previous recipients.
In addition, Dr. William Cliff, professor of biology and the John J. Hughes, '67, M.D., endowed program director of pre-professional health, was presented with Niagara's Emerito Medal in observation of his 25 years of distinguished service to the university.
Chambers, of Niagara Falls, has been a faculty member at Niagara since 2003, and has also served as NU's associate vice president for academic affairs, history department chair, and director of the master's program in interdisciplinary studies. He has published two books and numerous articles on New York state history, and twice hosted the Conference on New York State History. Chambers has also been awarded three National Endowment for the Humanities Landmarks in American History and Culture grants.
Holding a bachelor's degree from Middlebury College, and master's and doctoral degrees from The College of William and Mary, Chambers currently serves as president of the Niagara Falls National Heritage Area, and has served on Gov. Andrew Cuomo's "Path Through History" task force and the state historian's War of 1812 bicentennial working group.
Tong joined NU's campus community in 2013. The Niagara Falls resident earned a B.S. from the China University of Mining and Technology, and an M.S. and Ph.D. from the University of North Carolina at Charlotte. His research interests include mobile computing, mobile and web application, web/GIS-based application, big data analysis and visualization. For the past three years, Tong has presented innovative teaching approaches at NU's annual Conference on Teaching and Learning. His work with dozens of students on projects has resulted in 35 presentations at the NU Undergraduate Research Conference, as well as several national and international technology competitions.
A two-time (B.S. and Ph.D.) graduate of Cornell University, Cliff, a Grand Island resident, has served as a faculty member at NU since 1992. Cliff, Niagara's pre-health adviser, is a Carnegie Scholar at the Carnegie Academy for the Scholarship of Teaching and Learning, and a member of Project Kaleidoscope's Faculty for the 21st century. He is also a visiting professor at the University at Buffalo's School of Medicine and Biomedical Sciences.
Papers by Cliff on case-based teaching and learning have appeared in Advances in Physiology Education and the Journal of College Science Teaching. He has been a regular contributor to the annual summer workshops sponsored by the National Center for Case Study Teaching in Science, an investigative member of the Physiology Education Research Consortium, and a workshop facilitator at the Biology Scholars Program. He also serves on the editorial board of Advances in Physiology Education.
To learn more about Niagara University, visit www.niagara.edu.
Categories
NFP School feature