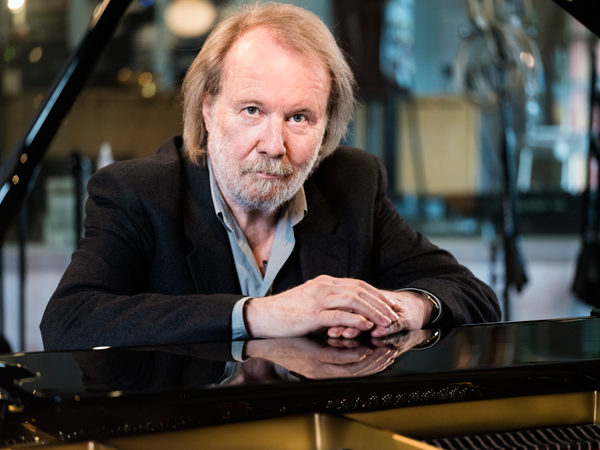 Fri, Aug 18th 2017 09:20 am
'Piano' due Sept. 29 on Deutsche Grammophon
First track, 'Thank You For The Music,' available now
Click HERE to view Benny talking about 'Piano'
Universal Music Group, the world leader in music-based entertainment, today announces a brand-new album of solo piano music from legendary Swedish composer and ABBA co-founder Benny Andersson. The album, titled simply "Piano," will be released on Friday, Sept. 29, through iconic classical music label Deutsche Grammophon.
"Piano" takes listeners on a 21-track journey through Andersson's acclaimed and celebrated career as songs from ABBA, his musicals and other solo-compositions are re-interpreted as never before, performed unaccompanied by just Andersson himself, on his trusted grand piano.
The album was recorded with Linn Fijal, engineer and studio manager at his own RMV Studios, on the island of Skeppsholmen, in the heart of Andersson's hometown Stockholm.
The tracklisting for "Piano" is as follows:
1. "I Let The Music Speak"
2. "You And I"
3. "Aldrig"
4. "Thank You For The Music"
5. "Stockholm By Night"
6. "Chess"
7. "The Day Before You Came"
8. "Someone Else's Story"
9. " Midnattsdans"
10. "Målarskolan"
11. "I Wonder (Departure) "
12. "Embassy Lament"
13. "Anthem"
14. "My Love, My Life"
15. "Mountain Duet"
16. "Flickornas Rum"
17. "Efter Regnet"
18. "Tröstevisa"
19. "En Skrift I Snöen"
20. "Happy New Year"
21. "I Gott Bevar"
Andersson's label said these are tender, touching and emotional arrangements, highlighting the theatrical, as well as classical-like qualities, both in writing and performance of music that has touched millions around the world since ABBA first came together in 1972. The music on this album reinforces Andersson's gift for melody - a gift shared with many great classical composer-pianists throughout history - who have also inspired him throughout his life and career.
Speaking on the genesis of the album, Andersson said, "In the process of recording this album, I have come to realize that the pieces I have chosen to play are an integral part of me. In endeavoring to reach for some core within them, I have found that, the more I strip away the clothing, the closer I feel to the music, regardless of whether it was created last year or 40 years ago. In a strange way, I feel like I am playing my memoirs."
"It was very different to how I've made records in the past, and that was part of the joyfulness of it all," he added. "Even without the bass, drums, guitars, strings and vocals on these songs, I think there is still substance in all of them. That was very pleasing to realize."
Sir Lucian Grainge, chairman and CEO of Universal Music Group, said, "This new collection of solo piano recordings will reinforce Benny's legacy as one of the finest contemporary composers of our time."
Frank Briegmann, president and CEO of Universal Music Group Central Europe and Deutsche Grammophon, said, "Benny's songs have revolutionized pop music. He is an innovator and one of the greatest and most creative minds of his field. With this album, he presents as clear and unobstructed a view of his musical universe as never seen before in his long career. Apart from that, Benny also reveals himself to be an amazing pianist, and these new interpretations offer a whole new perspective on his work. Benny has wowed and inspired his fans many times and in many different ways. And now he is doing it again. Together with everyone at Deutsche Grammophon, I am really looking forward to this album and I want to congratulate Benny on this wonderful release."
The first track to be released from the album, a new version of ABBA classic "Thank You For The Music," is available immediately to download and via streaming services.
"Piano" will be released on Deutsche Grammophon on September 29. The album is available to pre-order HERE.
Categories
Entertainment Entertainment feature Top Entertainment News