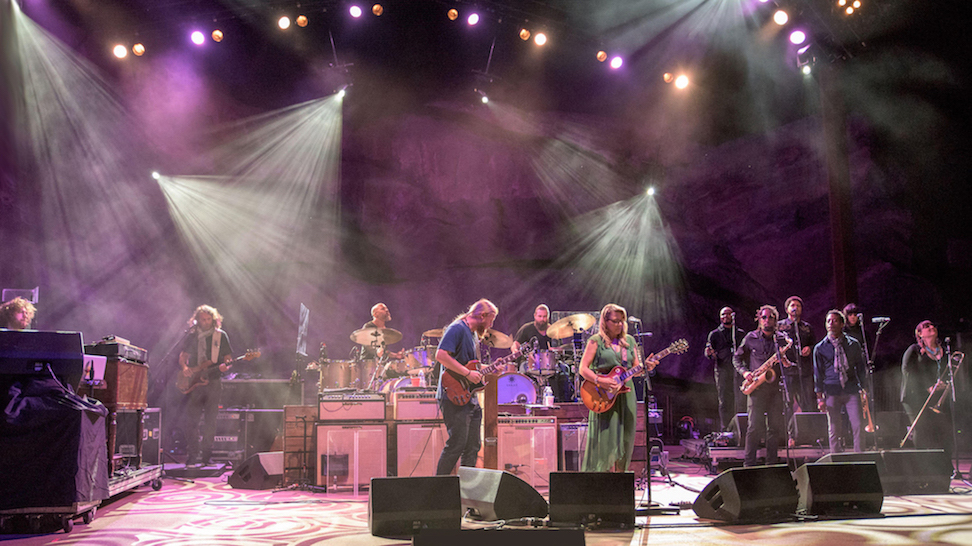 Tue, Aug 15th 2017 04:05 pm
Premieres footage from sold-out Red Rocks run
After 21 nights of music across 16 different states, Tedeschi Trucks Band has completed their triumphant third annual "Wheels of Soul" tour.
With support from "masters of soulful folk" The Wood Brothers and "psychedelic-blues institution" Hot Tuna, the 2017 iteration of the popular multi-band tour proved to be "a champion of the summer concert season" (Cincinnati.com) and TTB's most successful "Wheels of Soul" voyage to date.
Husband-and-wife bandleaders master slide guitarist Derek Trucks and powerhouse guitar/lead vocalist Susan Tedeschi and their well-oiled 12-piece outfit broke their own attendance records, selling out 10 of the shows on the tour, including two nights at Denver's iconic Red Rocks Amphitheatre.
The summer run further cemented the "Wheels of Soul" tour's reputation as a unique and unmatched collaborative musical experience. The band performed more than 70 different songs and peppered its shows with well-chosen covers and a slew of guest sit-ins, including The Rolling Stones' "Sweet Virginia" and Paul McCartney & Wings' "Let Me Roll It" with The Wood Brothers and Elmore James' "The Sky Is Crying" and Jefferson Airplane's "3/5 Of A Mile In 10 Seconds" with Hot Tuna.
The collaborations came to a peak at Red Rocks, which Live for Live Music referred to as "a complete show of mastery." In addition to The Wood Brothers and Hot Tuna, Tedeschi Trucks Band was joined by John Medeski of Medeski Martin & Wood and John Bell of Widespread Panic.
WATCH:
This summer's "Wheels of Soul" tour also held a unique emotional significance for the band due the many legendary musical friends who passed away recently. The list includes truck's uncle Butch Trucks and Gregg Allman (both of whom Derek played with for 15 years in the Allman Brothers Band), Leon Russell and "grandfather of the jam scene" Col. Bruce Hampton. The band paid tribute over the summer, breaking out Allman live staples "Whipping Post," "Ain't Wastin' No More Time" and "Statesboro Blues." The musicians also dedicated a cover of Bobby Blue Bland's "Don't Cry No More" to Bruce during their performance at Atlanta's Fox Theatre, where Hampton gave his now-legendary final performance.
"Performing is healing, for everyone on stage," Trucks said. "It's important to get out and play; there is definitely something cathartic about it. You can feel it in the audience, too. People like Bruce and Butch and Gregg, they meant a lot to a lot of people. When you acknowledge those things and play music in the right spirit, you are keeping the flame lit in your own way."
"Wheels of Soul" 2017 also was successful all summer in its charitable efforts and has raised nearly $100,000 as part of a unique initiative with the tour's partner, Craft for Causes. Local craft brewers created a limited-edition "Wheels of Soul"-themed beer in their taprooms for each tour stop, with the proceeds benefiting the Mr. Holland's Opus Foundation, a national nonprofit that works to promote music education and provide musical instruments to underprivileged youths.
Forty different breweries hosted launch parties for their special brew, sporting clever names such as "Butch's Brown Ale," "All That I Need" and "Harmonious." The Crafts for Causes van followed behind the tour buses throughout the run, driving 14,500 miles and covering 42 states, visiting 39 different breweries along the way.
Tedeschi Trucks Band will now take a brief break from the road before heading back out for their fall tour beginning Sept. 15 in Birmingham, Alabama. The tour will take the band to New Orleans and Texas before their annual six-night residency at the Beacon Theatre, which will include their milestone 25th performance at the storied Manhattan venue on Wednesday, Oct. 11.
The band will wrap up the year with a string of two-night performances along the West Coast and a three-night stand in Tedeschi's native Boston.
Tedeschi Trucks Band is also currently working on material for their next studio album, the follow-up to their acclaimed 2016 studio release, "Let Me Get By."
Categories
Entertainment Entertainment feature
comments powered by Disqus