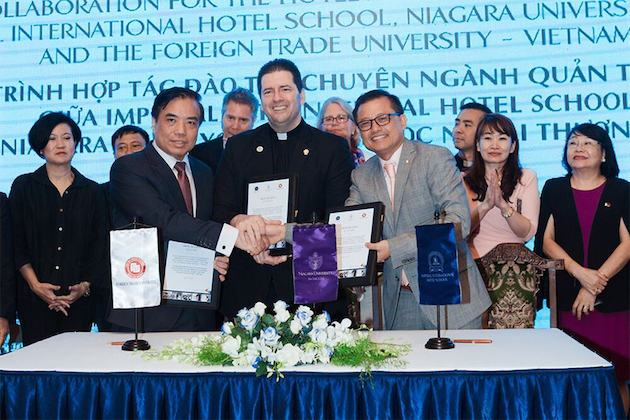 Thu, Jul 27th 2017 08:55 am
A new, three-way international partnership commissions Niagara University faculty to develop hospitality training curricula for students in Vietnam and other Asian countries.
The Rev. James J. Maher, C.M., president of Niagara University, signed an articulation agreement June 15 with Dr. Bui Anh Tuan, president of Foreign Trade University, one of Vietnam's premier academic institutions, and Huynh Trung Nam, chairman of the Imperial Group, the corporation that oversees the five-star Imperial Hotel in Vung Tau.
Working in conjunction with FTU and the Imperial Group, Niagara University faculty members will design academic and experiential coursework intended to prepare graduates for careers in Vietnam's booming hospitality and tourism industry.
"We are eager to further deploy the excellence of our faculty to bring professional training to the growing hospitality and tourism industry of Vietnam," Maher said. "At the same time, deepening our relationships with Foreign Trade University and the Imperial Group expands the international presence of Niagara University and provides unique opportunities for students from both countries."
The nine-month program, aligned to international standards, will include coursework at FTU and hands-on training at the Imperial Hotel. Faculty from Niagara University's renowned College of Hospitality and Tourism Management will conduct a portion of the training. Dr. Deborah Curtis, director of NU's Brennan Center for Language, Culture and Leadership, will also hold train-the-trainer sessions for FTU professors this fall.
The first cohort of 150 students will begin the program Oct. 1, with a second slated to commence about midway through the first. Consisting of 70 percent practice and 30 percent theory, the training is initially being marketed to FTU graduates who wish to work in hospitality and tourism management.
Moving forward, individuals who complete the program will have the option of continuing their studies at Niagara to earn an accredited graduate degree.
NU students are already participating in internships at the Imperial Hotel as part of an agreement signed between the entities in January 2016.
NU's College of Hospitality and Tourism Management, founded in 1968, was the first program in the U.S. to offer a bachelor's degree in tourism and has a long history of training individuals to succeed the industry. The college, which employs faculty from all over the globe and offers internships and exchange programs in several countries, is a founding member of the Hotel Schools of Distinction.
To learn more about Niagara University, visit www.niagara.edu.
Categories
NFP School feature Sentinel