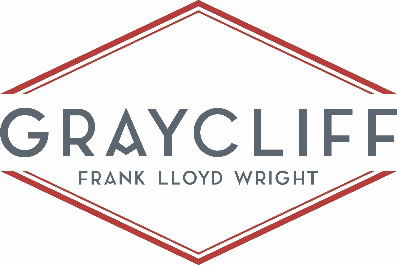 Mon, Jul 10th 2017 04:45 pm
State fulfills 90% of restoration funding; focus now shifts to visitor's center
See video here
Empire State Development on Monday announced the Frank Lloyd Wright-designed Graycliff Estate in Derby is to receive $3.7 million in Buffalo Billion phase two funding to fully bring the property back to its 1931 condition. The $4,047,000 project will include complete interior restoration of the Isabelle Martin House and the Foster House, landscaping improvements and rebuilding beach access.
The interior restoration project will continue to build on the $6 million exterior restoration already completed by the Graycliff Conservancy since 1997.
"Frank Lloyd Wright's genius brought beauty and grandeur to Buffalo and Western New York in the early days of the 20th century, and with the completion of the Graycliff Manor project that legacy is preserved for the 21st Century and beyond," Lt. Gov. Kathy Hochul said at the announcement. "I am honored to have been part of today's announcement which, through Gov. Cuomo's investment in Buffalo's revival, makes New York state a partner in the restoration of this irreplaceable cultural and world-class tourism destination."
"After 20 years of hard work, Graycliff will now be beautifully restored," said Robert Wooler, Graycliff's executive director. "Fueled by the energy and ingenuity of volunteers and the carefully managed investments of $6 million by Gov., Cuomo, Erie County and our foundation partners, Graycliff is poised to delight visitors from both around the globe and right here in our backyard. The Buffalo Billion II investment of $3.7 million will be serving as a catalyst for Graycliff to fully realize Frank Lloyd Wright's vision for this spectacular property."
ESD President, CEO and Commissioner Howard Zemsky said, "Frank Lloyd Wright's Western New York masterpiece has always been a sight to behold and, with the unveiling of this beautiful glass mosaic fireplace, it's better than ever. This updated New York State Historic Site will increase tourism revenue to the region and is another great reason to come visit."
With the state's investment fulfilling 90 percent of the restoration budget, and the remaining 10 percent already secured or pledged, Graycliff will shift its focus to the addition of a pavilion that will serve as a visitor and interpretive center, featuring exhibits, a video viewing station, and other interactive amenities that bring Graycliff's past, present and future to light.
To support the next phase of Graycliff's growth, the conservancy and its board of directors recently adopted a new strategic plan that outlines a creative rethinking of how the Graycliff story is told. This resulted in the evolution of the Graycliff brand, including a new logo, brand story, video and website.
More than just a refresh, the new brand better conveys Graycliff's full story.
Charles Le Fevre, Graycliff's board president, noted, "Graycliff doesn't solely represent an architectural masterpiece, it draws strength from its tranquil eight-acre natural setting on a bluff overlooking Lake Erie."
The Graycliff brand also embodies the stories surrounding the project itself, including the Martin family's relationship with Wright, Isabelle Martin's influential role during a time when women didn't have a strong voice in society, and Wright's struggles, both personal and professional - all during a tumultuous and uncertain time in America's history.
To experience Graycliff in its fully restored glory, or to reserve your place on a tour, visit http://www.experiencegraycliff.org/ or call 716-947-9217.
"Graycliff is one of Frank Lloyd Wright's masterpieces that helps to cement our region's reputation as an architectural tourism destination point," New York State Sen. Chris Jacobs said. "I am very pleased that this investment in Buffalo Billion II funding will complete its restoration, and I am looking forward to the completion of the project and the impact it will have on our community."
"Graycliff's continuing restoration is creating buzz around the world, and also ensuring that thousands more Frank Lloyd Wight enthusiasts will plan visits to Erie County to explore this architectural gem along with our other treasures," Erie County Executive Mark Poloncarz said. "This wise investment will fully return the property to its former glory, and I thank Gov. Cuomo for his vision in bringing the Graycliff restoration to a vibrant conclusion."
About Frank Lloyd Wright (American, 1867-1959)
Frank Lloyd Wright is internationally recognized as one of the most important figures in 20th century architecture and design. His genius is marked by his vision to create a new form of American architecture based on the open landscape of the Midwestern prairie. Wright redefined traditional concepts of space by physically and spiritually connecting the built environment to the natural world. He is best known for his "prairie-style" homes, efficient office buildings, and innovative furniture and decorative designs.
About Graycliff Estate
The nonprofit Graycliff Conservancy Inc., a 501(c)(3), was founded in 1997 to acquire, preserve and restore the Frank Lloyd Wright-designed Graycliff Estate. The conservancy has made notable progress in completing restoration of the estate, while offering public tours and educational events. A New York State Historic Landmark, Graycliff is listed on the National Register of Historic Places. It is located at 6472 Old Lakeshore Road in Derby.
Categories
Business NFP Top News Features