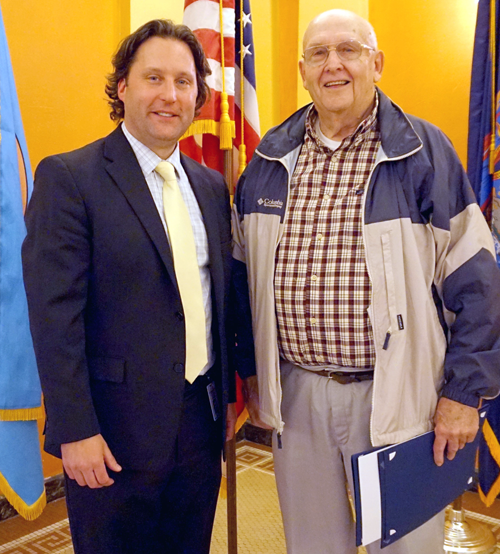 Niagara County: Lewandowski is Senior of the Year

Thu, Jun 1st 2017 05:15 pm
Community-minded citizen honored by legislators
By Christian W. Peck
Niagara County Public Information Officer
Niagara County lawmakers paused at a May legislative meeting to honor Lockport's Leo Lewandowski, naming him 2017's Senior of the Year.
Lewandowski, a fixture in his Sherman Drive neighborhood, was noted for acts of kindness ranging from snowblowing as many as five neighbors' driveways following heavy snowfalls over the past quarter-century, to keeping an eye on children as they waited for the school bus while their parents readied themselves for work.
A recent widower, Lewandowski has also been involved in palliative care of friends suffering from cancer and other terminal afflictions.
"It takes a lot to make a community work as such," Niagara County Office for the Aging Director Ken Genewick explained after honoring Lewandowski at the May legislative meeting. "The Leo Lewandowskis of our neighborhoods are the glue that holds everything together. They take on the menial tasks that take a load off their neighbors' shoulders; they hold the hands of the dying; they share their strength with others."
This sentiment was echoed by Legislature Chairman Wm. Keith McNall, who joined Genewick in presenting Lewandowski with a proclamation naming him Senior of the Year.
"Lockport and Niagara County are strengthened by people like Leo Lewandowski," McNall said. "To say Leo is a good citizen seems to simplify his acts, but there is a truth to it: Leo is a good citizen, someone who makes his neighborhood better and helps his neighbors shoulder their burdens. We're lucky to have Leo in Lockport."
McNall shared a copy of the Legislature's proclamation declaring Lewandowski "2017 Outstanding City of the Year." Among other things, the proclamation states, "Leo is one of the most caring individuals. He wakes up every morning thinking of how he can help someone else rather than his own individual needs. Some might say that Leo's individual needs are in fact just simply helping others."
Categories
NFP Tribune HP Feature List Tribune HP Feature Picture