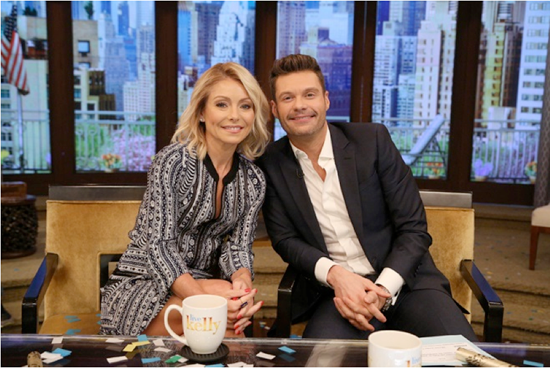 A new era in daytime television began today when Kelly Ripa introduced the permanent co-host joining her on the top-rated, Emmy-winning "Live" franchise. Veteran broadcaster Ryan Seacrest is the new co-host of the newly re-christened "Live with Kelly and Ryan."

Beginning with Monday's inaugural broadcast, Seacrest joins Daytime Emmy Award-winner Ripa as co-host and a fellow executive producer on daytime's longest-running, No. 1 entertainment talk show. A staple of modern American pop culture and media, and a household name from his decades on the radio, on television and as an Emmy-winning producer, Seacrest also has been a longtime friend of "Live," with many guest appearances and multiple co-hosting stints.

"Ryan is a quintessential broadcaster and at the top of his game," Ripa said. "I am thrilled to start my mornings with him every day, and we are so fortunate at 'Live' to have him join the family."

She added, "Ryan is a close friend and his star shines as brightly off camera as it does on. His tremendous success is only matched by his impeccable reputation. Plainly said, everyone loves him, and so will our daily viewers."

Seacrest said, "Not only is Kelly Ripa one of the most talented live hosts in broadcast TV, she's also become a very dear friend to me over the years. It's consistently been my privilege and pleasure to work alongside Kelly with all her incredible talents, charm and humor - whether hosting the Disney Christmas Day Parade special with her a decade ago or guest co-hosting alongside her on 'Live,' it's always just been easy and fun to share a set with her, and we have a blast. I've been so fortunate in my career to be a part of some incredible TV programs, and I'm excited to join daytime's top entertainment talk show. And, most important, I couldn't think of anyone I'd rather share this new chapter with than Kelly Ripa - she's a dream broadcast partner, and I can't wait to start."

He added: "I also want to genuinely thank Bob Iger, Ben Sherwood, Rebecca Campbell, Dave Davis, Janice Marinelli and, of course Michael Gelman, who all have been incredibly supportive in making this new chapter happen for me."

Seacrest will make the move to New York immediately to begin his co-hosting duties, and will continue hosting and executive producing "On Air with Ryan Seacrest," his market-topping No. 1 nationally syndicated LA morning drive-time radio show for iHeartMedia's 102.7 KIIS-FM, as well as a nationally syndicated Top 40 radio show. New York's ABC7, home of "Live with Kelly and Ryan," will house a brand-new iHeartRadio studio for Seacrest's New York City location.

"With Ryan, 'Live' has a new co-host who is a master of live TV, as well as a terrific interviewer with tens of thousands of hours of live broadcasting experience," said Gelman, executive producer, "Live." "When you combine those attributes with the talents and experience of the incomparable Kelly Ripa, you have two skilled and entertaining broadcasters with great chemistry. Add in an experienced production team and a successful 30-year franchise, and you have the perfect combination."

"One of the secrets to 'Live's' decades of success in daytime is the relatability of our hosts and their ability to deeply connect with the audience. Ryan has a charm and charisma that resonate with his devoted TV and radio audiences and, together, he and the remarkable Kelly Ripa will take 'Live' to a whole new level. We're delighted to introduce this extraordinary new team of Kelly and Ryan to our family of 'Live' station partners and millions of viewers," said Marinelli, president, Disney/ABC Home Entertainment and TV Distribution.

"For four decades, WABC has been the proud home of 'Live.' With this announcement, the show begins another amazing era, and we couldn't be more excited to have a true broadcaster like Ryan Seacrest join the legendary Kelly Ripa as co-host. Our viewers are in for a real treat," said Campbell, president, ABC owned stations and ABC daytime.

"Live with Kelly and Ryan" is distributed in national syndication by Disney | ABC Home Entertainment and TV Distribution. The show is produced by WABC-TV in New York and executive produced by Gelman, Ripa and Seacrest. Visit "Live" on Facebook and Instagram (@LiveKellyandRyan), and Twitter and SnapChat (@LiveKellyRyan).