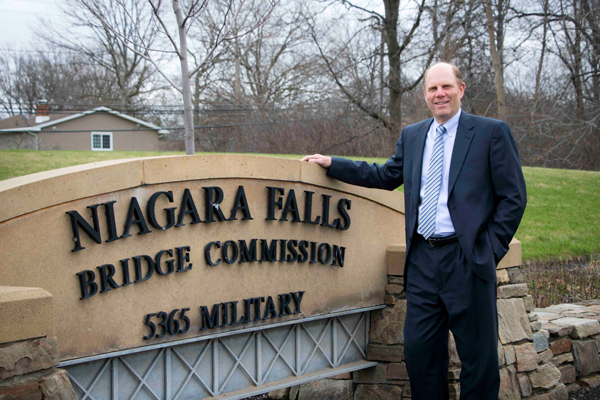 On Thursday, the Niagara Falls Bridge Commission board officially announced the selection of Kenneth N. Bieger to succeed Lew Holloway as the organization's next general manager, effective May 1. Bieger currently serves as chief financial officer for the NFBC and brings more than 35 years of professional management experience to the general manager position.

"It is my pleasure to announce that, after a very thorough selection process, Ken Bieger has been selected as the next general manager of the Niagara Falls Bridge Commission," said Russ Quarantello, NFBC chairperson. "While we were fortunate to have many excellent candidates apply for the position, what really set Ken apart was his strong vision for the future and appreciation for our organization's mission, coupled with extensive experience acquired through several previous executive management roles."

As the current chief financial officer of the NFBC, Bieger has direct hands-on expertise in the areas of strategic and budgetary planning, contract negotiations and capital projects funding oversight. Prior to joining the commission, he also held several executive-level leadership positions in the Buffalo Niagara region, including the most recent role of chief financial officer, treasurer and member of the board of directors for Karrena International in Williamsville.

"The mission of the commission is to facilitate the movement of goods and people at our three border crossings, while investing in programs, technology and infrastructure improvements that will allow us to effectively maintain the three bridge facilities well into the future," said John A. Lopinski, NFBC vice chairperson. "We know that Mr. Bieger shares this same focus and he will operate in the best interests of the NFBC, our employees, and the travelling public."

"On behalf of the commissioners, I want to express our deep appreciation to all those who participated in our application and candidate review process," said Kathleen Neville, NFBC human resources committee chairperson. "We were presented with exemplary candidates from both sides of the border. Ultimately, we were fortunate to find the person we believe is best suited to lead the NFBC forward within our organization."

Bieger succeeds outgoing General Manager Holloway, who has held the NFBC's senior administrative position for the past eight years.

During his tenure, Holloway helped oversee more than $250 million in construction and capital improvement projects, including: full reconstruction of the Queenston Plaza; completion of the new Rainbow Bridge bus processing center; various capacity expansion upgrades and technology enhancements at the Whirlpool Bridge; advancement of the Lewiston U.S. Customs Plaza improvement project; introduction of various NEXUS promotional initiatives; positive cultural change resulting in successful contract negotiations with both U.S and Canadian bargaining groups; installation of the E-ZPass program at all three crossings; and input into the U.S.-Canada Beyond the Border Accord. Holloway also served as a noted voice on U.S.-Canada border issues through his involvement with organizations such as the Public Border Operators Association, Can-Am Border Trade Alliance, the Buffalo Niagara Partnership and IBTTA, among others.

Holloway will retain a recent appointment as member of the board of directors for the Buffalo and Fort Erie Public Bridge Authority.

"As we welcome Mr. Bieger to this new role, we also bid farewell to Lew Holloway and thank him for his extended service to the commission and the people of Western New York and Southern Ontario over the last eight years," Quarantello said.

About the Niagara Falls Bridge Commission

A Joint Resolution of the 1938 U.S. Congressional Third Session created the Niagara Falls Bridge Commission. The Extra Provincial Corporations Act of the Province of Ontario, Canada, licenses the NFBC. Canada and the U.S. are equally represented on the NFBC by an eight-member board of commissioners. Initially established to finance, construct and operate the Rainbow Bridge, the commission proved sufficiently efficient and effective to assume responsibilities for the Whirlpool Rapids (lower) and Lewiston-Queenston bridges.

The NFBC builds and maintains all facilities for customs and immigration functions on both sides of the international border. The NFBC is self-supportive, largely through user fees (tolls) and private-sector tenant leases.