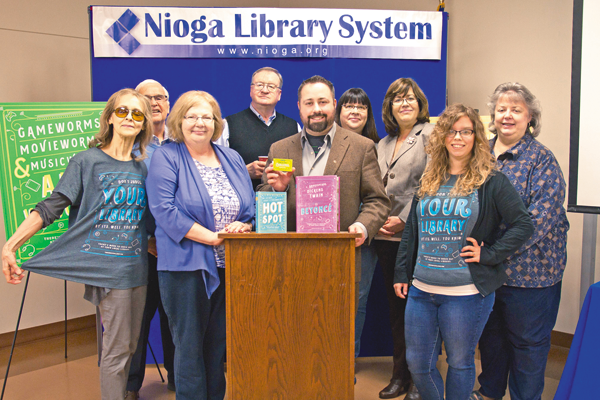 Shown are NIOGA board members and staff. (Photo by Joe Russell)

On Saturday, April 1, NIOGA, a nonprofit cooperative library system, kicked off its 2017 Check Out Challenge at the North Tonawanda Public Library and announced a scavenger hunt across the system's three counties. The challenge comes just ahead of National Library Week.

The Check Out Challenge aims to engage young adults and raise awareness of the countless free, digital services available at NIOGA libraries.

To spread the word about the challenge and encourage young adults to visit their local library, books have been hidden near libraries across Niagara, Orleans and Genesee counties. Special bookmarks inside these books instruct finders to return the books to their local library for a prize. This scavenger hunt was inspired by an original video (www.youtube.com/watch?v=pdn5cYpjpSY&t=14s) filmed in Western New York featuring whimsical talking books.

"After a wildly successful first year of the Check Out Challenge campaign, we are excited to debut this video that shows unsuspecting people stumbling upon talking books and add a new element to this year's challenge with the hidden book scavenger hunt," said Charlie Begley, president of the NIOGA board of trustees. "It is critical that we continue to engage younger generations to introduce them to the free, digital resources available at their local library, including music streaming, DVD and video game rentals and so much more."

Anyone ages 10 and up can take part in the 2017 Check Out Challenge by picking up a punch card at a participating library and choosing at least five of these seven activities to complete:

•Connect to our free Wi-Fi

•Check out a CD, DVD, video game, or book

•Ask your librarian a question

Participants can drop off their completed cards in the challenge bucket located at each participating library to enter to win prizes such as a PlayStation 4, GoPro HERO5 Session camera and Fitbit Blaze.

The Nioga Library System is a nonprofit cooperative library system serving the public libraries in three counties. The library system takes its name from the counties that it serves - Niagara, Orleans and Genesee. The system, which consists of 21 public libraries, is one of 23 similar systems in New York state. It receives most of its financial support through the New York State Department of Education. The Nioga Library System, which was chartered in 1959, helps to provide improved informational services to all residents of its three county area.