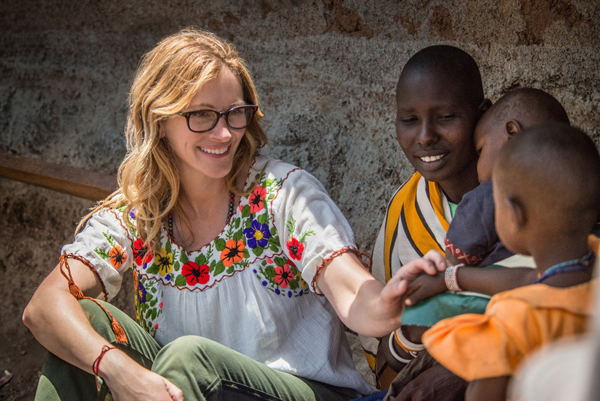 Celebrating Red Nose Day for the third year in a row, NBC has anchored a special night of programming on Thursday, May 25, with Chris Hardwick set to host the "The Red Nose Day Special" at 10 p.m. In addition, Academy Award winner Julia Roberts and other stars will partake in Red Nose Day-themed programming throughout the night that will both entertain viewers and give them an opportunity to make a difference in the lives of kids in need.

Red Nose Day is an annual campaign that uses the power of entertainment to raise money and awareness for children living in poverty.

"Red Nose Day's effort to lift children out of poverty is centered around heart and humanity, and we're excited to create a night of programming that reflects this. From Julia Roberts and Bear Grylls showing viewers the impact of their donations, to celebrities challenging themselves on 'American Ninja Warrior' to raise funds and awareness, this will be an incredible night," said Paul Telegdy, president, alternative and reality group, NBC Entertainment. "We are thrilled to have Chris' wit and compassion championing the evening as our host for 'The Red Nose Day Special.' "

"Celebrity Ninja Warrior for Red Nose Day" at 8 p.m. ET/PT will be followed by a special 9 p.m. episode of "Running Wild with Bear Grylls for Red Nose Day" with Roberts venturing to Kenya, leading up to NBC's third annual "The Red Nose Day Special" hosted by Hardwick at 10 p.m. The three shows will be seamlessly tied together in celebration of Red Nose Day, with calls to action to donate through each of the three programs.

Throughout the night, viewers will be entertained, learn about the programs supported by Red Nose Day that are helping to change the lives of children, and have the opportunity to support the charity through calls to donate, making a real difference for kids in need here in the U.S. and around the world. This is the first time the night of programming for Red Nose Day has included special editions of existing NBC shows, which is evidence of the network's deep partnership and commitment to this initiative.

Red Nose Day is a fundraising campaign run by the nonprofit organization Comic Relief Inc., a registered U.S. 501(c)(3) public charity. Money raised supports programs that ensure children in need are safe, healthy and educated, both in the U.S. and in some of the poorest communities around the world.

Red Nose Day launched in America in 2015 and, with generous support from millions of Americans and many outstanding partners, has raised more than $60 million in its first two years in the U.S. People across the country are encouraged to support the cause by coming together and wearing their red noses, organizing fundraising events, and watching and donating during the night of Red Nose Day programming on NBC.

The campaign's iconic red noses will be sold exclusively at Walgreens and Duane Reade locations nationwide beginning later this month and are currently on sale at Walgreens.com in bulk quantities of 60 or more.

In the first celebrity edition of "American Ninja Warrior," nine brave stars will tackle the course, all in the name of charity.

From the Floating Steps to the Warped Wall, each of the celebs will have to face up to six challenging obstacles that call upon their upper body strength, agility and stamina.

Bear Grylls enlists acclaimed actress Julia Roberts for a very special adventure to Kenya, where the pair navigate a hazardous route through a harsh landscape of desert, canyons and rivers to deliver life-saving vaccines to a remote village before the vaccines expire. As Bear and Roberts encounter the dangers and enjoy the majesty of this wild land, they know that any delay could mean disaster for dozens of local children counting on them.

After a long journey to Kenya, Roberts visits with patients and medical staff at Wamba Hospital and is given life-saving cold-chain vaccines that must be kept cold on the trip ahead. She meets Bear and boards a bush plane, but a remote and dusty landing strip means they must jump from the moving plane before it takes off again. Forging ahead via land cruiser and on foot, the pair navigates through dense underbrush, avoid hungry crocodiles and hippos, and stay awake through the night to monitor their precious cargo and deliver it safely to the Samburu community awaiting their arrival.

The journey highlights the impact of live-saving vaccines, which Red Nose Day helps to provide to children around the world.

Poignantly capturing the dire challenges some children are faced with internationally, Roberts will travel to Nairobi, Kenya, to visit one of Africa's largest slums: Kibera. People there live in extreme poverty and the need for essential medication is critical. She visits an overcrowded hospital full of serious cases, most of which are entirely preventable with vaccines that cost as little as $5.

The special includes the much-anticipated "Red Nose Day Actually," a short "Love Actually" reunion film from writer-director Richard Curtis, who is also the founder of Red Nose Day. Bringing together the cast of the beloved holiday movie to support the charity, Curtis will reveal an exclusive version of the film with never-before-seen footage just for "The Red Nose Day Special" airing in the U.S.

Additional talent for the special will be announced at a later date.

Richard Curtis is an executive producer for the live NBC telecast (a Universal Television production), along with John Irwin of Irwin Entertainment, and Lily Sobhani. For more information, visit the Red Nose Day website at rednoseday.org. Follow @RedNoseDayUSA on Twitter and Instagram, and on Facebook at Facebook.com/RedNoseDayUSA.