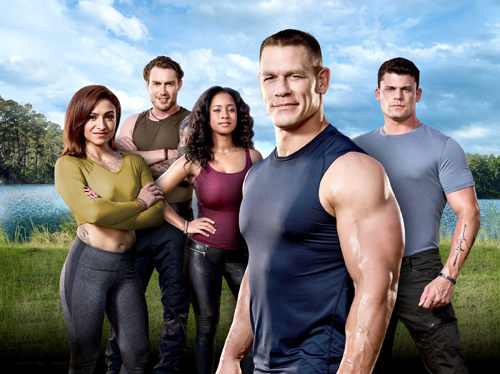 "American Grit": From left, Cadre members Riki Long, Grady Powell, Chloe Mondesir, host John Cena and cadre member John Burk. On Sunday, June 11, the WWE Superstar brings 17 new competitors - all who either have lost their grit or never had it - to sunny Hampton Island. There, Cena and an elite group of military heroes will live alongside these people, all in search of a change, and take them under their wing as they lead them through a series of all-new epic team and individual challenges. In the end, only one competitor will win a quarter of a million dollars, but hopefully, all of them will find their grit. (FOX photo by Michael Becker)

WWE Superstar John Cena welcomes 17 new competitors - who either have lost their grit or never had it - to sunny Hampton Island, Georgia, on season two of "American Grit,' premiering Sunday, June 11 (9 p.m. ET/PT) on FOX. There, Cena and a brand-new group of mentors, known as "The Cadre," will live alongside these men and women at Camp Grit, where the drama quickly heats up. They will take these competitors under their wings as they lead them through all-new team and individual challenges. In the end, only one individual will win a quarter of a million dollars, but hopefully all of them will find their grit.

This season, "The Cadre" includes John Burk, an infantry drill sergeant with the U.S. Army; Riki Long, a U.S. Marine; Chloe Mondesir, an ammunition technician with the U.S. Marines; and Grady Powell, a green berets commander. "The Cadre" will build their teams and leverage their different mentoring styles to prove they have what it takes to help their competitors find their grit. It will be as tough a competition for "The Cadre" as it is for the teams, as tensions will rise and emotions will flare. But there is some fun to be had when the most unlikely personalities are brought together under one roof - and anything is possible in the Georgia sun.

Each week, the competitors will undergo a series of team challenges designed to test their ability to work together, strategize and lead. The winning team is safe from elimination, but the losers' fate is in the hands of the winning cadre leader, who selects three rival competitors to face off in a final test of endurance. With these brand-new challenges focusing more on will, desire and mental toughness, rather than mere physical prowess, the strongest may not be the one who survives.