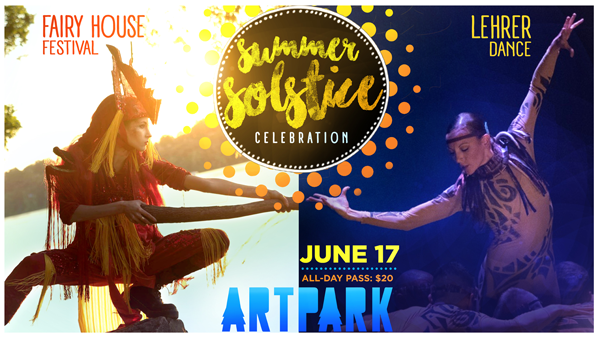 Artpark & Company will celebrate the beginning of summer on Saturday, June 17, by transforming the park grounds and the Mainstage Theater with a "Summer Solstice Celebration" from noon through midnight.

The day begins with the 7th annual Fairy House Festival. This event includes the popular Fairy House Tour designed and constructed by artists, community groups, schools, families and individuals. The afternoon will feature a creative collection of art activities, potion-making and the opportunity to build one's own small "fairy dwelling" in the Artpark woods (noon-4 p.m.).

The Fairy House Festival continues through the afternoon with live music by Slyboots, spoken word artists, dancers, aerialists and more performances. Patrons will be able to mix, mingle and wander the park's grounds, all while being transported to a magical world celebrating the summer solstice.

At 6:30 p.m., guests will be led on a joyous parade into Artpark's Mainstage Theater to experience the spectacle that is Lehrer Dance (7 p.m.). Buffalo's own internationally touring professional dance company will keep the audience on the edge of it seat with its world-renowned repertoire, embodying a trademark fusion of athleticism, artistry and accessibility.

Immediately following Lehrer Dance - as the sun sets - an after-party with live music by Slyboots, and libations, will take place on the Artpark theater terrace, culminating in the late night's solstice celebration of summer's beginning.

Then, for the especially devoted solstice fans still seeking more, a lantern-led moon dance into the woods begins at 11:30 p.m.

The "Summer Solstice Festival" is created and directed by Kate LoConti and Jon Lehrer, two of Western New York's most esteemed artists in their respective fields of professional theater and dance.

Tickets are $10 apiece for the Fairy House Festival, $15 for the Lehrer Dance performance and party, or $20 for an all-day pass good for all events.

Festival tickets and day passes are available online at tickets.com and artpark.net, by phone at 1-888-223-6000, and at the Artpark box office (450 S. Fourth St., Lewiston) on the day of the events.