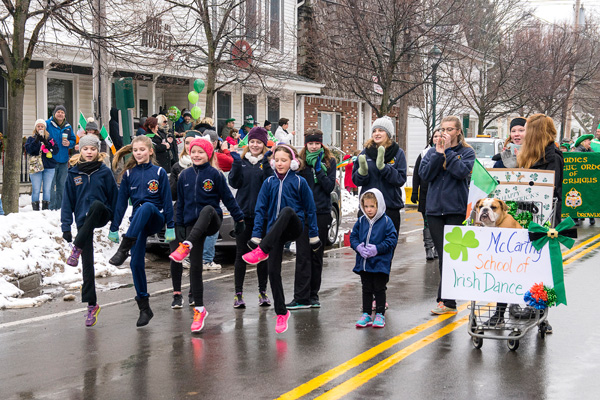 The McCarthy School of Irish Dance on the parade route, with the dancers' prize-winning float. (Photo by Wayne Peters)

The coordination and cooperation of this event between the Youngstown Business & Professional Association and the Village of Youngstown was clearly evident as can be seen by the (following quote from Youngstown Mayor Raleigh Reynolds): "Cheryl, this was the best parade yet - it just keeps getting better."

I agree 100 percent with Raleigh, because it really "takes a village" to coordinate a successful parade.

The day started out snowing, but the snow eased up by noon, and everyone who committed to participate was there. All of the YBPA board members participated.

On behalf of the YBPA, I would like to thank everyone for joining in the fun. Thanks to Greg Robertson, president of the Youngstown Volunteer Fire Co., for agreeing to send two fire trucks and an ambulance to participate and lead the parade. First time we've had these wonderful vehicles in our parade!

Also, thanks to the Village of Youngstown Police, with Ryan Comerford driving the lead police car. Thanks to Old Fort Niagara Executive Director Robert Emerson and his troop of soldiers (including but not limited to his wife, Kate, and children, Will and Suzannah Emerson) for leading the parade. Thanks to the soldiers who played their music for us - and especially the wonderful salute to former Mayor Neil Riordan at the end of the parade, with Bob shouting the salute and the soldiers firing their muskets at his command.

Only in Youngstown will you find British soldiers leading a St. Patrick's Day Parade!

We thank Judge David Truesdale for being the judge for the best "floats."

Congratulations to the winners!

The Youngstown MacKenzie Highlanders and Pipes were led by none other than Vince Burke, who led the group both through the Jug, then the Mug, and then down Lockport Street to the Lions "Cash Bash" being held at the Red Brick Community Center. 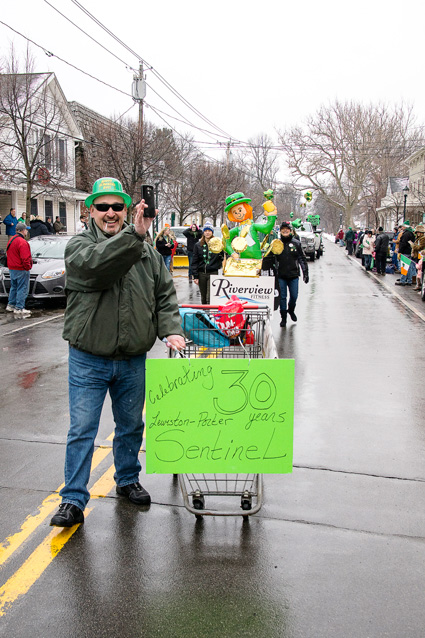 The Lewiston-Porter Sentinel was represented at the parade. (Photo by Wayne Peters)

For the first time, we had Niagara Frontier Publications, with a shopping cart displaying "Celebrating 30 Years - Lewiston Porter Sentinel," and our local sales rep, Phil Buffone, and his son, Peter, who actually tossed wrapped newspapers into the crowd. (Now that's dedication!)

Youngstown's VFW Post 113 marched; Youngstown Lion Mike Jackson actually dressed as a "Lion" and marched. We were thrilled to have 2017 Peach Queen Angelica Beiter march with us. Deposits for Food with Andy Sarkees and Doug Adamson of Porter Empty Return drove their identifying vehicles at the tail of the parade.

Somewhere-Youngstown had a decorated flatbed truck titled "My Sham Rocks Somewhere." The Riordan family was represented with an "Irish Princess" (Jodee Riordan inside a Melloni's shopping cart with the theme and music from the hit series "Game of Thrones.")

Melloni's, with butcher, Ernie, and Diane Melloni, had an Easter bunny theme with a giant pot of gold shopping cart (of course!). Bandana's was there with Melissa Kudel and her staff - and, of course, green bandanas to give away to the crowd. Duffy and Tammy Johnston pushed a themed shopping cart for "Worry Free Winter," and the Costello family represented Lakewood Landscaping.

Thanks a million to every single attendee! Apologies if anyone was missed in this list.

Thanks to Wayne Peters for being there to take his famous and much-prized photographs! And last, but not least, we thank The Sentinel for covering this parade every year. By getting the word out online, in the newspaper, and with everyone's ads (thanks, Phil), even folks who couldn't attend showed their support.

As it is, turning out our "shopping cart parade" will continue to be more and more successful, and Mayor Neil Riordan will never be forgotten.

See you all next year when our YBPA parade will be held on St. Patrick's Day - noon, Saturday March 17. 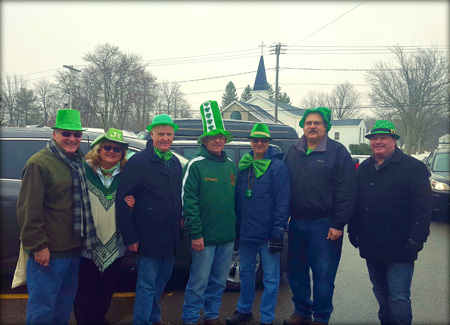