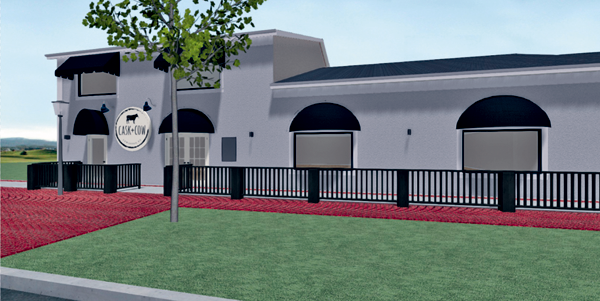 Pictured is an artist's rendering of the soon-to-be-open Cask & Cow restaurant at 840 Center St. (Image courtesy of Giusiana Architects and Engineer)

The Village of Lewiston Planning Commission voted unanimously to endorse part of a redevelopment plan submitted by Jack Hornung, the new operator of the restaurant and bar located at 840 Center St.

Board members approved a series of changes to the building's exterior: primary color - soon to be light gray - signage, black awnings, gooseneck lights and a menu display case to the right of the double-doors.

Both Planning Board Chairman Norm Machelor and Vice Chairwoman Anne Welch said they like Hornung's vision for the building, which recently housed Bailey O'Riley's, and more famously was the site of the Lewiston Village Pub.

Hornung said the Cask & Cow will "specialize in gourmet hamburgers. A gourmet burger bar. That will be our mainstay. And there will be a few extra sides with some great appetizers; some great vegan options; a good cocktail list; good beers on tap."

He said he thought that idea would work best on Lewiston's famed restaurant row.

"We first looked at Lewiston in general, at all of the cuisines that were offered, and tried to find a niche that we could provide for ourselves that we could actually stand out and be good at something," Hornung said. "There's a place in Buffalo I fell in love with called ABV (Allen Burger Venture). Their food is amazing; their menu is amazing. I really like their food, and that kind of style and concept; I liked the idea of that. We just saw an opening in Lewiston without gourmet burgers and decided that was the route we wanted to go."

He said the setup would be "much more of a restaurant," than a bar, and that large chalkboards listing food and drink options would physically separate the bar and restaurant sections.

Hornung has spent more than a decade at the Third Street Tap Room in downtown Niagara Falls. His intended opening date in Lewiston is April 15.

While the restaurant is set to debut in the spring, it might be awhile before guests can sit outside.

The Planning Board did not vote on Hornung's patio proposal. Members expressed apprehension over two proposed units, and cited concern over the overall patio size, its railing materials (plastic instead of iron), and the addition of extra pavers.

The first of two patio units would enclose the existing front door, which is nearest to the bar. The second patio would be next to the French doors, which Hornung said would be the main entrance to the Cask & Cow.

Planning Board members told Hornung he would need a series of approvals to move forward with the patio setup. First, the New York State Department of Transportation would have to agree to the plan. As the proposed courtyard extends out from the building and toward the sidewalk, it sits on property owned by the DOT.

With the Cask & Cow on Center Street, a state roadway, Hornung would also need project approval from the Niagara County Planning Board.

In addition to physical approval, the Planning Board told Hornung he would need permission from the New York State Liquor Authority to serve beverages outside within the patio area.

Previous restaurant/bar patios existed under a special use permit.

The Village of Lewiston mayor's office does not have any paperwork signifying state approval of past patio setups.

Hornung said his preference would be to install permanent patios. For now, his proposed patios would be removable, with no posts or bases placed into the ground. He said he also plans to add pavers to increase the walking space around the patio railings.

Planning Board members said their patio endorsement would be contingent upon state approvals. If and when Hornung receives such seals of approval, he'll also need the Village of Lewiston Board of Trustees to OK his project.

Both Mayor Terry Collesano and Deputy Mayor Bruce Sutherland said they like Hornung's concept, but wouldn't vote on his patio plan prior to the state and county reviews.

Trustees didn't vote on the other exterior changes. 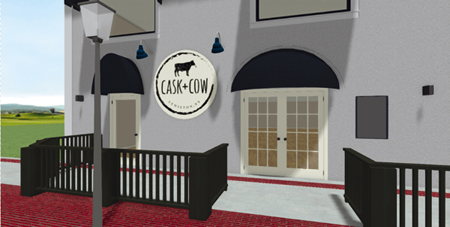 Pictured is an artist's rendering of the soon-to-be-open Cask & Cow restaurant at 840 Center St. (Image courtesy of Giusiana Architects and Engineer)

He and his partners envision erecting a three-story building, with two condos on a lower basement level facing the Niagara River, four condos partially at street level, and another four on the second floor. Each unit will be between 1,500 and 1,800 square feet. Six of the units are presently drawn to be three-bedroom, while four are shown as two-bedroom. The building also will offer an elevator, eight single-car garages, decks and a river dock.

Each condo unit will be sold. Talarico speculated the price could be in the mid-$400,000 range, or higher.

"Yeah, it does," Planning Board member Joshua Krupp said.

Project architect Jim Fittante of Fittante Architecture said an existing house on the property's northwest corner would be demolished. He also said his clients would apply for a special-use permit for 17 right-of-way parking spaces.

The Planning Board unanimously accepted the first submission, and endorsed the special-use permit request.

Pending final approval from the Village of Lewiston, Talarico said, "I think we're hoping to start in the fall. ... If not earlier. I think we'd like to be boxed-in by the winter, so we're not going to run into weather issues."

It appears in the drawing that a South First Street wooded area would shield the condo building and grounds. 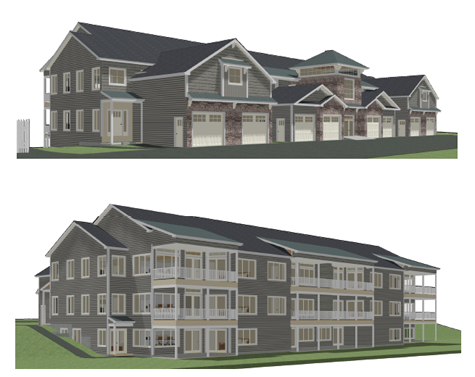 Pictured above are two artistic renderings of the Tuscarora condo building designed by Fittante Architecture. The top drawing fronts on South First Street, while the bottom faces the river.