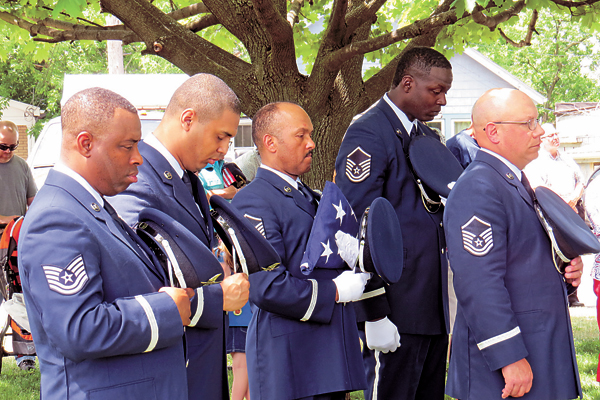 The Veterans of Foreign Wars, Downriver Post No. 7487, has announced it will again host a Memorial Day parade, remembrance ceremony and a community luncheon on Memorial Day, which is May 29.

The parade will begin at 11 a.m. at Center and Fourth streets. It will proceed to the Veterans Memorial at Academy Park. The remembrance ceremony, in honor of those who have died defending this country, will begin at approximately noon. A free community luncheon will be served under a tent in Academy Park following the ceremony.

Norm Machelor, the parade committee chairman, said, "The VFW fed over 350 persons at the free luncheon last year and some, unfortunately, were turned away. We wish to thank Lewiston Fire Co. No. 1 for hosting the luncheon in their banquet facility in last year, but the facility is not large enough for the anticipated attendance this year."

The parade committee said it would like all Lewiston organizations to participate this year. There is no charge to enter the parade, but an application must be submitted.

This year, the fire companies have been asked to enter only smaller vehicles, and not large trucks, to encourage smaller groups of walkers. Lewiston businesses, social groups and other community organizations are encouraged to participate. Decorations and themes in honor of U.S. heroes are most appropriate.

The Veterans of Foreign Wars is soliciting donations to defray expenses. Donations can be sent to the VFW Memorial Day Parade Committee, PO Box 1164, Lewiston, NY 14092. Applications and information are available. Contact Machelor at 716-866-6880.