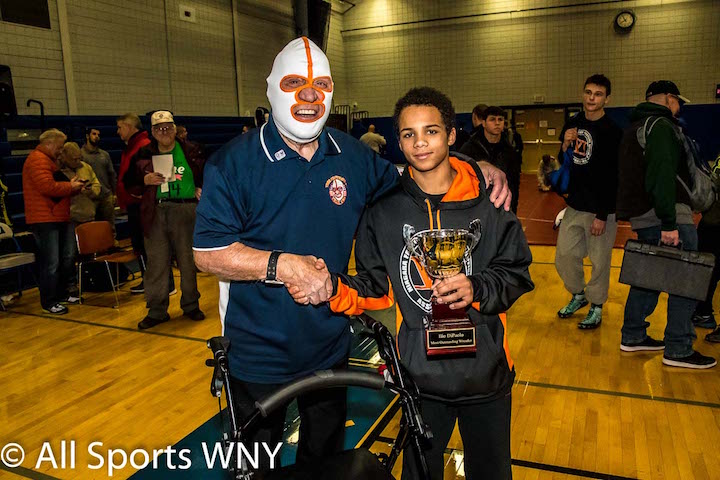 "The Destroyer" Dick Beyer with a fan. (Submitted photo)

Pro Wrestling Illustrated has named "The Destroyer" Dick Beyer the recipient of the 2016 Stanley Weston Award, the magazine's lifetime achievement award. One of the most famous masked wrestlers in the world, Beyer is a sports icon, a former world champion, and an integral player in the relationship between the worlds of U.S. and Japanese wrestling that has extended for generations.

Beyer told PWI he has wrestled about 8,500 matches over the course of his 39-year career. It all began in 1955 as a Syracuse University-honed athlete in his hometown Buffalo wrestling scene. In 1962, Beyer would don the "Destroyer" mask, obliterating opponents and the cultural boundaries of professional wrestling forever. A 1963 bout with Rikidozan, the father of Japanese pro wrestling, made history as one of the most watched television events of all-time.

"When I wrestled Rikidozan, 70 million people watched the match on television in Japan," Beyer told PWI. "To my knowledge, that remains the second all-time highest TV rating in Japan, behind the Tokyo Olympics."

"The Destroyer" was a recording artist and TV star in Japan, starring in an award-winning variety show that ranked among Japan's most popular programs over five years. Wrestling historians and Beyer's peers agree he paved the way for Americans across the entertainment and sports spectrum to become major box office stars in Japan.

"The Nature Boy" Ric Flair, a 16-time world champion and two-time WWE Hall of Famer, said he was introduced to the big lights of Tokyo by Beyer. Flair said Beyer helped take Japanese wrestling to a new plateau of success before retiring in 1993.

"Japan wouldn't have been where they were with (Giant) Baba and (Antonio) Inoki without (Beyer). I mean, here is this guy, Dick Beyer, wrestling Rikidozan, who walked around Japan with a briefcase with a million dollars in it strapped to his wrist. It was a very tough culture over there," Flair said, noting the Japanese wrestling scene respected Beyer for his toughness and class.

The man behind the mask, Beyer, was a successful coach at the high school level, and collegiate level for Syracuse football. Beyer also trained pro wrestlers such as Syracuse grad and WWE agent Mike Rotunda, also known during his pro wrestling career as IRS.

"Congratulations 'Destroyer,' a well-deserved award. 'The Destroyer' was very unselfish not only with his time, but with his knowledge, when it came to me. 'Destroyer' was instrumental in helping get my professional wrestling career started on the right track," Rotunda said.

PWI's Stanley Weston Award is named after Weston, the magazine's founder. Past recipients have included Flair, Lou Thesz and Bruno Sammartino. Dan Murphy, senior editor for Pro Wrestling Illustrated, said there is no one more worthy of the award than Beyer.

"He helped build pro wrestling in Japan and remains a revered icon in that country." Murphy said. "In addition to a spectacular career in the ring, Dick Beyer has remained active with numerous charities in both the U.S. and Japan, and has been a true ambassador for professional wrestling."

Beyer's role as an ambassador for wrestling extends to the amateur ranks as well. Flair fondly recalls an amateur wrestling trip that Beyer, Flair, and Flair's late son, Reid, took to Japan as "Team Destroyer" in 1999.

"He invited me on this (amateur wrestling) tour with my son. It was 'Team Destroyer,' and my 12-year-old son went over there and did a homestay for like 10 days. My son won a silver medal. ... It was 'Team Destroyer' (with all) the pageantry of the Japanese nationals," Flair said. "He's been through it all, he has respect from the entire wrestling world, and for me, the fact that he's my hero (is because) he is my son's hero."

Today, Beyer lives in his hometown of Akron, near Buffalo, where his family operates Destroyer Park Golf, a venture inspired by his days in Japan.

There is an ongoing campaign to encourage the WWE to enshrine Beyer into the Hall of Fame, with a petition available HERE.