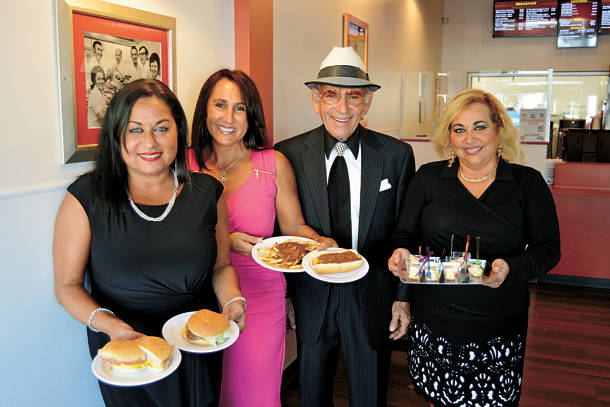 Business owner Louie Galanes stands with his daughters as they display some of the popular dishes available at Louie's Texas Red Hots. From left are, Argyrie Galanes, Vaso Kroto, Louie and Stacy Galanes.

Since opening its doors in 1967, Louie's Texas Red Hots has proudly been serving its Sahlen's hot dogs, special sauce, Greek favorites and more. The business has become synonymous as one of Western New York's landmark chain restaurants and it has recently partnered with Sahlen's, another Buffalo original. This year, as the restaurant celebrates its 50th anniversary, it will show gratitude to its customers with "Take it Back Tuesdays" until May.

Community members who have helped Louie's grow from one to seven locations are welcome to stop by any of its restaurants on the first Tuesday of every month until May. If they purchase one hot dog, they receive a second at a "retro" price.

"When I opened, there were about 20 Texas Hot places and they all went family style. We stayed true to the Texas Hot to make it the leader of his business," said Louie Galanes, owner of Louie's Texas Red Hots. "We are extremely grateful to Western New Yorkers who have made Louie's Texas Red Hots a culinary institution. Without them, we wouldn't be able to serve residents and visitors throughout Niagara and Erie counties. "Take it Back Tuesdays" is a way for us to show thanks as we think about the past 50 years."

In addition to "Take it Back Tuesdays," Louie's is celebrating its 50th anniversary by serving as the official sponsor of the Buffalo Bandits; with a new app; and by promoting it's "Skip the Dishes" amenity, an online delivery and pickup service.

Louie's Texas Red Hots may be best known for its Sahlen's hot dog grilled on a flat top, served on a steamed roll with mustard, silver onions and topped with Louie's special, 100-percent beef, spicy meat sauce. However, certain locations serve a variety of dishes 24/7. There is a full breakfast all day, in addition to made-to-order sandwiches such as souvlaki beef and chicken along with gyros and homemade spanakopita. Try Louie's old-fashioned milkshakes made with real ice cream, milk and syrup, which have been popular for 50 years.

Louie's Texas Red Hots originally opened May 2, 1967 on Bailey and Delevan avenues, and now has seven other locations. Its newest location is on Webster Street in North Tonawanda. Its other locations are on Delaware and Hertel avenues, Bailey Avenue and Route 33, Elmwood Avenue near Forest Avenue, Harlem and Mineral Springs roads, Transit Road near Losson Road, and Southwestern Boulevard and Abbott Road near New Era Field.