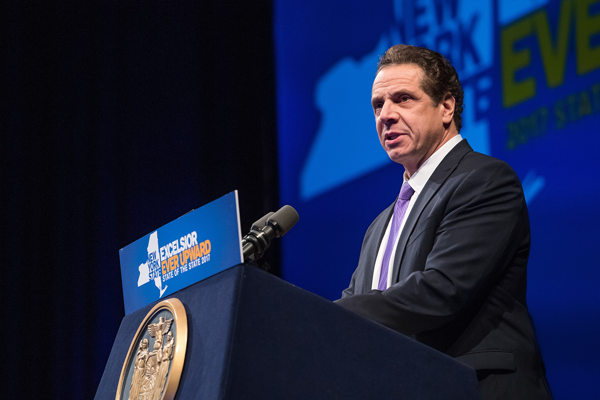 Gov. Andrew Cuomo delivers his 2017 State of the State Address to the people of Western New York. (Flickr photo courtesy of the governor's office)

Gov. Andrew M. Cuomo on Tuesday proposed completing the Hudson River Valley Greenway and Erie Canalway trails by 2020 to create the Empire State Trail, the largest state multiuse trail in the nation. To achieve this, the state will develop 350 miles of new trail in three phases to create a 750-mile pathway for hiking and biking along scenic vistas and through charming, historic communities.

The Empire State Trail will span much of the state, from the New York Harbor up through the Adirondack Mountains to the Canadian border - and from the shores of Lake Erie along the historic Erie Canal to the heart of the Capital Region.

"The scenic ‎natural beauty that spans every corner of this state is key to our prosperity, vital to our future, and part of who we are as New Yorkers," Cuomo said. "The Empire State Trail, once completed, will be the nation's largest state multiuse trail network, providing residents and visitors alike unprecedented access to New York's outdoor treasures, driving tourism and economic activity to communities across the state and helping to protect our environmental resources for generations to come."

The Erie Canalway is nearly 80 percent complete and runs approximately 360 miles along the storied Erie Canal, connecting Buffalo to Albany. The governor's commitment to complete this trail coincides with the bicentennial of the Erie Canal, as construction of the engineering marvel begin in 1817. Each year, approximately 1.5 million people use the Erie Canalway Trail along the historic Erie Canal, resulting in an estimated $253 million in economic activity from visitor spending. The Buffalo-Pendleton segment is the most heavily used part of the Canalway Trail with approximately 350,000 annual users. With this proposal, remaining gaps will be completed, connecting the two trails to establish the New York's Empire State Trail.

Once the Empire State Trail is complete, the trails will attract more hikers, bikers and cross-country skiers than ever before, and provide access to destinations, heritage areas, and historic sites and districts, including:

This extensive trail network will enhance community connectivity and support healthy lifestyles by providing both urban and rural communities access to endless outdoor recreational opportunities. These long-distance destination trails are economic drivers that can generate $1.5 million to $5 million in annual economic impact for surrounding communities. Additionally, this trail network is expected to support an estimated 9.6 jobs for every $1 million invested, and every dollar will yield $3 in direct medical benefits for surrounding communities.

The trails will also draw tourists from around the world to explore New York's landscapes and history, while enjoying local bed and breakfasts, hotels, restaurants, wineries, breweries, farmsteads and cultural attractions along the way.

A new trail website and mobile app will launch to further connect New Yorkers and visitors to the state's great outdoors. Both the website and app will feature a list of greenways, trails with hiking descriptions, and their level of difficulty. The app will allow users to find services and attractions nearby using location services with the option to share the user's exact location with friends, or first responders, in the case of an emergency. Social sharing options will also be available, to share photos on Instagram, Facebook and Twitter. A live tour map, walking and driving directions, are available as well as an elevation reader that lets users know when trails cross hills and mountains.

The trail system will provide travelers access to a number of signature attractions, all of which can be found on the website and mobile app, including Battery Park, Walkway Over the Hudson, Corning Preserve, Lake George, Schenectady Rivers Casino, the Erie Canal Museum, the Buffalo Naval Military Park, local breweries and other lodging accommodations and family-friendly destinations found along the Empire State Trail.

"Parks, historic sites, and heritage areas are the very fabric of our local communities, and the Empire State Trail will further connect these treasured resources with all New Yorkers, neighbors and friends," New York State Parks Commissioner Rose Harvey said. "Gov. Cuomo is rejuvenating the state park system and, now with the creation of the Empire State Trail, we are deepening the connection and sharing many of these wonderful treasures and all it takes is a bike ride or casual stroll."

New York State Department of Environmental Conservation Commissioner Basil Seggos said, "New York's natural resources are truly world-class destinations and, through Gov. Cuomo's leadership, the new Empire State Trail will establish important connections to offer residents and visitors even more opportunities to experience all the state has to offer. I look forward to working with our partners in State Parks to expand and enhance marketing of all the outdoor adventures one can have throughout the state, and continuing to help communities across the state capitalize on the economic potential of outdoor recreation."

New York State Canal Corp. Director Brian Stratton said, "Tens of thousands of people already use the Canal trail year-round for hiking, biking, jogging and cross-country skiing. I'm beyond thrilled that Gov. Cuomo has proposed completing the trail along the entire length of the Erie Canal. Now, more people will be able to enjoy all this iconic waterway has to offer as we celebrate the canal system's bicentennial in 2017."

Also, speaking of the outdoors and encouraging guests to stay longer, Cuomo announced big plans for Niagara Falls State Park and the Niagara Gorge on Monday while at the University at Buffalo.

"We're going to reclaim 135,000 acres of the Niagara Gorge corridor, preserving the rich ecology," Cuomo said. "It will be the largest expansion of green space since the days of Olmstead. Part of the gorge belongs to (the New York Power Authority), which committed $1 million for conservation to that section of it. We will complete the ecological restoration of the gorge and we also understand that we need to generate more activities for tourists on the Niagara Falls side of the falls. When you look across the river, you see Canada has more activities. ... We need to correct that, and we're going to do it in Niagara Falls. On Goat Island, we will create a year-round destination for tourism and build a world-class lodge with sweeping views of the Niagara River.

"(Empire State Development) will also be issuing (a request for proposal) to build greater outdoor activities on Goat Island that will boost tourism and give people an international destination to visit. So we're very excited about that."

Finally, the governor noted, "Western New York has many older downtown areas in many of its towns, and we want to have a downtown revitalization-specific plan for places like Alfred, Tarrance Center, East Aurora, etc., to revitalize those downtown areas. We'll be running it as a competition, but we'll fund it through Buffalo Billion two."