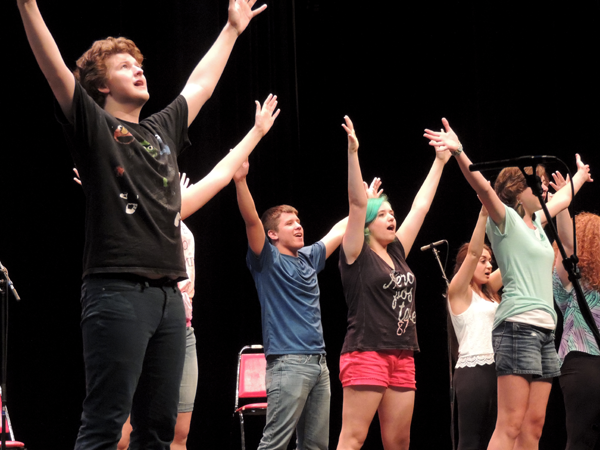 Artpark Theater Academy for children & young adults culminating with a staged production of 'Fiddler on the Roof Jr.'

A new Artpark Theater Academy was announced on Monday, offering a unique experience for young performers. Artpark will present the "Broadway Jr." program from July 10 though Aug. 5. During the four-week session, academy students ages 8-17 will explore all aspects of theater and present their own production of "Fiddler on the Roof Jr." at Artpark's Mainstage Theatre with the help of the entire community.

Students will gain experience in the theater arts through a program led by a team of professionals in theater, and filled with daily workshops focusing on acting, dancing, vocals, scenic design and promotions. The program will culminate with a fully staged performance of "Fiddler on the Roof Jr." on Aug. 5. The production will be designed, rehearsed and performed by the academy company students, thus providing them with an in-person taste of the professional theater business and coupled with an opportunity to perform in a world-class professional venue.

Students will work with props and costumes, as well as top local theater professionals to fully gain the ultimate student theater experience. Former Artpark Theater Camp Director Paschal Frisina will serve as director of the Artpark Theater Academy and he will direct "Fiddler on the Roof Jr."

Frisina is currently the director of the theater arts program at St. Joseph Collegiate Institute in Kenmore. He also teaches public speaking, history of theater, and is a guest director as an adjunct professor at Niagara County Community College. As a performer, Frisina has been involved in more than 100 professional productions, with over 20 of those shows on stage at Artpark.

The academy, appropriate for children ages 8-17 with minimal or no experience required, has limited availability for the cost of $895 per student. Registration forms are available at artpark.net. Early registration is encouraged.

Local auditions for all roles will be held in the spring, with dates, times and additional details to be announced soon. Auditions are not necessary to participate in the academy, with every registrant participating in the final production in some capacity.

For the summer season, Artpark will also offer three sessions of the popular Art Camp (ages 9-14 participate in workshops in drawing, painting ceramics) in July, and the return of Rock Camp (ages 12-17; eligible instruments include but are not limited to guitar, bass, keyboards, vocals, drums) in August. Enrollment fee for Art Camp (July 10-14, 17-21, 24-28) is $250 per session, while it's $475 per student for Rock Camp's two-week session (Aug. 7-18).

More information on Artpark Summer Camp programs can be found at artpark.net.