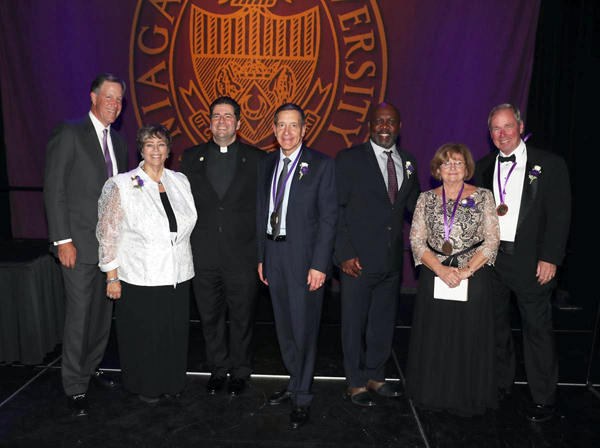 Niagara University recognized the accomplishments of five extraordinary individuals - while raising critical funds for student scholarships - during its 2016 President's Dinner, which was held Nov. 18 at the Seneca Niagara Resort & Casino in Niagara Falls.

Nearly 550 Niagara University alumni, students and friends attended the event, the proceeds of which directly benefit Niagara University's scholarship programs. A net total of more than $210,000 was raised this year toward student scholarship assistance, making it two years in a row that the $200,000 fundraising mark was surpassed.

The Rev. James J. Maher, C.M., who has made affordability and access to excellent education hallmarks of his Niagara presidency, pointed to several critical reasons for the university's ascent to become the region's largest independent Catholic institution. Among them are the high degree of engagement students have with faculty, a 96 percent job and graduate school placement rate within one year of graduation and Buffalo-Niagara's highest four-year graduation rate.

Also celebrated during the event was Niagara University's impact on the social and economic development of Western New York, the latter of which is estimated at $227 million annually.

"The power of Niagara University lies in our ability make a world-class experience - one that commingles academic rigor, meaningful mentor-mentee relationships and Vincentian values - more accessible and more affordable to more young people," Maher said. "By doing so, we can fully realize the immense potential that Niagara University offers to students, alumni and members of the global community."

Earlier in the day, the university announced a $500,000 gift to the Rev. Joseph L. Levesque, C.M. Endowed Scholarship from trustee Robert Engel, Class of 1975, and his wife, Lynda. Used to help offset tuition costs for NU students who come from one of Western New York's eight counties, the scholarship is named after Levesque, Niagara's 25th president and a member of the Congregation of the Mission. The religious community, commonly known to as the Vincentians, is celebrating its 200th anniversary in the U.S., an occasion that was highlighted during Friday's event.

Niagara University also presented awards to five individuals in recognition of their professional success and service to the community.

Brian P. Crosby, '67 (Caritas Medal) is managing partner at Gibson, McAskill and Crosby LLP. Since graduating from Niagara University and Fordham University Law School, he has established himself as a top trial attorney in both the federal and state court systems. Highly regarded by his peers, Crosby has been honored by the American College of Trial Lawyers and the International Academy of Trial Lawyers. Since 1995, he has been listed in the Best Lawyers in America. Crosby has served on the boards of Millard Fillmore Hospital, Kaleida Health and the Visiting Nursing Association of Western New York. The retired U.S. Marine Corps lieutenant colonel is in the midst of his second eight-year term on NU's board of trustees.

Dr. Frances E. Crosby, '67 (Caritas Medal) holds a B.S. in nursing from Niagara University, an M.S. in child psychiatric nursing from Boston University, and a doctorate in education from the University at Buffalo. A registered professional nurse, she has been active for many years with NU's Nursing Alumni Council and Sigma Theta Tau, the international honor society of nursing. After serving in faculty positions at NU and UB, Crosby became the first chairperson of Niagara's new department of nursing in 1999. She has been instrumental to the development of NU's nursing programs as well as the formation of a state-of-the-art Nursing Simulation Center. Last September, when the NU nursing department was rebranded a school, Crosby was named its director.

Robyn L. Krueger (St. Vincent de Paul Award) joined Community Missions of Niagara Frontier Inc. in 1977, commencing her employment with the organization as a live-in houseparent to six adolescent males in Niagara Falls. In 1994, Community Missions named Krueger its executive director, a position she still holds. Krueger serves on many local, county and state committees and boards, including the Homeless Alliance of Western New York, the Juvenile Detention Association of New York State, and the Niagara County Coalition of Services to the Homeless, to name a few. Krueger earned a B.A. in psychology from the University at Buffalo in 1985. She has since completed graduate-level courses in UB's counseling, school and educational psychology department.

Dr. Gary D. Praetzel (Medal of Honor) is responsible for establishing Niagara University's College of Hospitality and Tourism Management and forging NU's reputation as a worldwide leader in hospitality training. Under Praetzel's direction, the college achieved a national top-20 ranking, was a founding member of The Leading Hotel Schools of the World, and launched prestigious industry relationships, including a hospitality partnership agreement with Carlson. After 35 years as a faculty member and dean, Praetzel retired in 2014, but continues to serve NU as dean emeritus and special assistant to the president. Praetzel, who earned B.A., M.A. and Ph.D. degrees from the University at Buffalo, has been active on many boards, including Visit Buffalo Niagara, the Darwin Martin House and the Niagara Experience Center.

Thurman L. Thomas (Legacy of Service Award) enjoyed a 13-year career as a running back for the NFL's Buffalo Bills and Miami Dolphins. After retiring in 2000, he was inducted into the Pro Football Hall of Fame (2007) and College Football Hall of Fame (2008). He maintains a close relationship with the Buffalo Bills organization, continuing as an ambassador for the team. In 2010, Thomas founded Legends Energy Group, an energy procurement and efficiency company that was later sold to NRG Inc. He is currently president of 3480 Group, a construction and engineering firm that specializes in telecommunications. A graduate of Oklahoma State University, Thomas is involved with numerous local charities, especially the Thurman Thomas Scholarship Fund.

Charles Chiampou, '76, a member of Niagara University's board of trustees, and his wife, Sandra, '76, served as the dinner's chair couple.

Jeffrey R. Holzschuh, '82, chair of NU's board of trustees, and Maryalice Demler, a member of Niagara University's Class of 1986 and anchor at WGRZ-TV Channel 2, served as emcees.

Additional information on Niagara University's financial aid and scholarship programs can be found online at www.niagara.edu/scholarships-financialaid or by calling 716-286-8700.

For information on establishing or contributing to a scholarship fund, contact NU's Office of Institutional Advancement at 716-286-8787, or go to www.niagara.edu/make-a-gift.