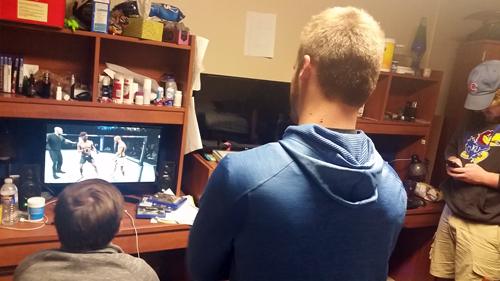 It's a brand new season for gamers. With many new titles coming out from big developers, there is plenty of new content for gamers to be excited about.

The fall has recently been one of the best seasons for new video game releases. There are brand-new realizes coming out almost every single week over these past three months.

Here are just some of the new titles that are being released this fall, and why gamers should be excited for them.

The "Dead Rising" series has been the best-selling games that development studio Capcom has had ever since the release of "Dead Rising" on Aug. 8, 2008.

With the fourth installment getting an early release soon, there is a lot to be excited about. Instead of having a new main character and a new location, as every new game in the series does, "Dead Rising 4" will be returning to the "roots" of the franchise. It will be set in the same mall as the first game (Willavette Parkview Mall), with the same main character, Frank West.

Old mechanics like taking pictures with Frank's trusty camera to earn PP, or prestige points, and a time limit on missions will be returning to the series. Capcom has put out a press release stating that, "Even though we are trying to return to the roots of the series, there will be more weapons, psychopaths, and zombies than ever before."

The long-awaited return of this beloved series has finally arrived. With the last game, "Mafia 2," being released on Aug 23. 2010, fans have had to wait over six years in order to get a chance to rise through the ranks of the Italian mafia. But some fans of the franchise might be disappointed, since "Mafia 3" is turning the series on its head.

Instead of being a member of the Italian mafia, players will step into the shoes of Lincoln Clay, a returning veteran of Vietnam who takes it upon himself to destroy the Italian mafia while building up his own crime syndicate.

Even though this move might discourage returning players, 2k games assured critics that, "This is a bold move, but we are hoping to encapsulate more members of the gaming community by setting the game in early '70s New Orleans, something which has never been done before."

However, one thing that is sure to stay the same is the explicit violence that the "Mafia" series is known for. "Mafia 2" even held the record for most swear words in a video game, which might be surpassed by this new, upcoming game.

Possibly one of the biggest game releases in history, "Battlefield 1" is set during the First World War, something which no Triple A title has ever done before.

Developer Dice listened to many members of the gaming community and heard the complaints about how too many games were set in a dystopian future with eco-suits.

One of the most important things that Dice stresses is that it is not trying to change the history of WW1, it is simply putting out certain "what if" scenarios. Dice has also said the campaign will treat the war with respect, and pay homage to the men and women who fought in the war that changed all wars.

"Battlefield 1" is a must-have for any college dorm room or man cave.

One of the last games to be released this fall is also one of the biggest. "Dishonored 2" is hitting stores on Nov. 19. The game takes place in the same place as the first game, the City of Dunwall. A huge change to the game is that, this time, you can choose between two main characters: assassins Corvo from the first game, and a brand-new character named Emily, who is apparently Corvo's daughter. Alongside this, developer Arkane Studios are promising a whole new line of different powers that Emily and Corvo can choose.

There are also new enemies around Dunwall, which the protagonists can encounter. In addition to the human enemies they face, Corvo and Emily with also have to deal with new Blood Bugs, pesky flying insects that look like mosquitos. These little flying terrors will relentlessly follow the characters and try to suck all the blood out of their bodies. The game will also feature one of the key aspects of the series: the option whether or not to kill anybody. Fans of this series will not be disappointed with this new games release.

There are so many more new video games coming out this fall. The only people that might be able to experience most of these games are college males. They are shown to have a higher interest than most in video games, and are more likely to spend their income on new releases. They are definitely in for a treat this year.