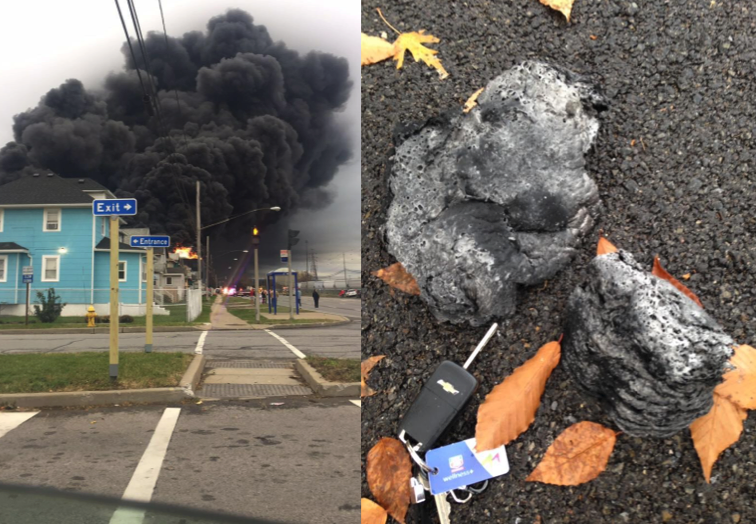 Pictured, from left, a view of the burning steel plant from the entrance of Bethlehem Park and Route 5. And, large pieces of ash that fell from the cloud of smoke were as big as a pair of keys. (Photos by Kevin Trala and Rose Glenn.

By Kevin Trala and Shelby Ehrenreich

It was not just another weekday morning for the residents of Bethlehem Park, as they woke up to see a massive black cloud covering the sky. It happened to be coming from their neighboring steel plant, now known as Steel Works Industrial Park.

The once highly employed Bethlehem Steel plant is a major part of Buffalo's history. It played a pivotal role back in the early to mid 1900s when Buffalo was a major port for steel production according to neighborhood native, Carol Migliore. The steel plant shut down its operations in the 1980s after the demand for steel wasn't necessary as it used to be. The factory has since then been used mostly for storage and plastic recycling.

It was at approximately 6:30 a.m. on Wednesday, Nov. 9, when a hot lightbulb was said to have fallen on combustible materials inside the old building, creating a untamable fire that would rapidly spread to engulf the plant, according to Fred Heinle, director of development for the City of Lackawanna.

When the smoke became noticeable, firefighters were immediately on the scene at 7:30 a.m. and tried their best to douse this ever-growing fire, but the flames were too great by that time to stop anything. The best they could do was to contain the mass rather than try to put it out.

The enormous factory neighbors major traffic outlet Route 5, which most southtown Western New Yorkers use to get to Buffalo. It is especially a commercial commute at that time of morning for workers and students. By 8:30 a.m., the road would be blocked off as the fire was deemed extremely unsafe for people to get even remotely close to.

For many residents of Bethlehem Park, the sight of the black mass was incredibly frightening and something they had never seen before.

"I wouldn't have ever expected to wake up after Election Day and see the steel plant on fire right out side of my window" said Bethlehem Park resident Debbie Dafchik. "I've never seen such a black cloud as gigantic as this one and especially this close."

Most residents were especially alarmed by how close the plant is to their homes.

"Beth Park is a high traffic area at that time of the day, with people going to work and especially young kids getting picked up for school," said neighborhood local Chris Gable. "It's extremely dangerous for anyone to even be near this kind of smoke."

Luckily for the Bethlehem Park inhabitants, the wind was blowing southward, which would save them from being overwhelmed with the dangerously black and toxic fumes. However, as the mass headed directly south, residents of Blasdell and Hamburg would experience negatives effects from the smoke.

Many people of Hamburg woke up to the cloud lingering above their homes. Some even discovered large pieces of ash on their driveways. The school districts of Hamburg and Blasdell even relocated their students to other areas safe from the unhealthy smoke.

The cloud was so thick that it showed up on the local news' Doppler radar, showing it extend to up to 23 miles.

At about noon on the day of the fire, Lackawanna Mayor Geoff Szymanski would declare a state of emergency for the city.

The fire would go on to burn for the next three days and, unfortunately for Bethlehem Park residents, winds would shift north directly through the neighborhood. Although the smoke was dissipating and less dense, there was still a heavy concern for unhealthy air quality.

"The whole city smelled like burnt plastic," said Lackawanna native Ritchie Cruzado. "It was nauseating to have to breath in that kind of air."

Szymanski would evacuate all 300 homes of Bethlehem Park on Thursday, Nov. 10, declaring the quality of air unsafe for residents to be around.

As the fire took a turn, residents explained how they were worried about their health and the condition of the air they were breathing in.

"I try not to be out here. I try to either to stay away or stay in the house or whatever," Caber said.

Another resident had similar concerns describing her worries.

"I'm just concerned as they're knocking it down, the dust is kicking up and the particles are going in the air and the wind is going our way," Suzanne Trala said.

The Department of Environmental Conservation has been in charge of monitoring the air and what affects it has on their community. The DEC had set up two different monitoring sites. One being located on Electric Avenue and a second one on Madison Avenue. Both locations were placed within the Town of Lackawanna. These two locations were chosen due to the direction of the wind.

As well, the U.S. Environmental Protection Agency also helped in making sure the air was being monitored properly and safely.

Residents have been worried about the particles that are being released into the air. Especially when levels are high, residents who may have various health conditions are easily affected by this issue.

The real question residents are asking now is "Where are the air monitors set up?"

Residents showed concern when air monitors were not seen located in the areas they were told to be located at. Szymanski said the community wants more air monitoring data to be provided for the residents. This lead to more devices being rented and installed.

The fire department explains how members were trying to fight the hotspots that were happening due to the moving of the plates. The DEC also explained to the residents that they do not want to release any false information until they do "more extensive lab work."

One of the terrifying questions that keeps getting asked by community members and property owners is who is going to pay for the damage done by this uncontrolled fire.

"From a financial standpoint, it'll be a devastating loss," said Phil Pantano, who was answering questions on behalf of the property owners.

For some residents, the fire brought back memories people had of the plant.

"I just remember all the men walking to work with their lunchboxes," said Roz Irwin, whose father and uncle used to work at the plant when she was younger.

Dr. Robert Hornberger, who had a storage space located in the former Bethlehem Steel cold mill, said he was worried he was going to run into problems and devastation. As the fire still kept its spark, Hornberger visited the site everyday afterward trying to get a hold of the contracts and records that had been saved for his business. Hornberger's company offers storage to winter cars, boats, personal watercrafts and even mobile homes. He has been using the Bethlehem old mill for storage for the past two years.