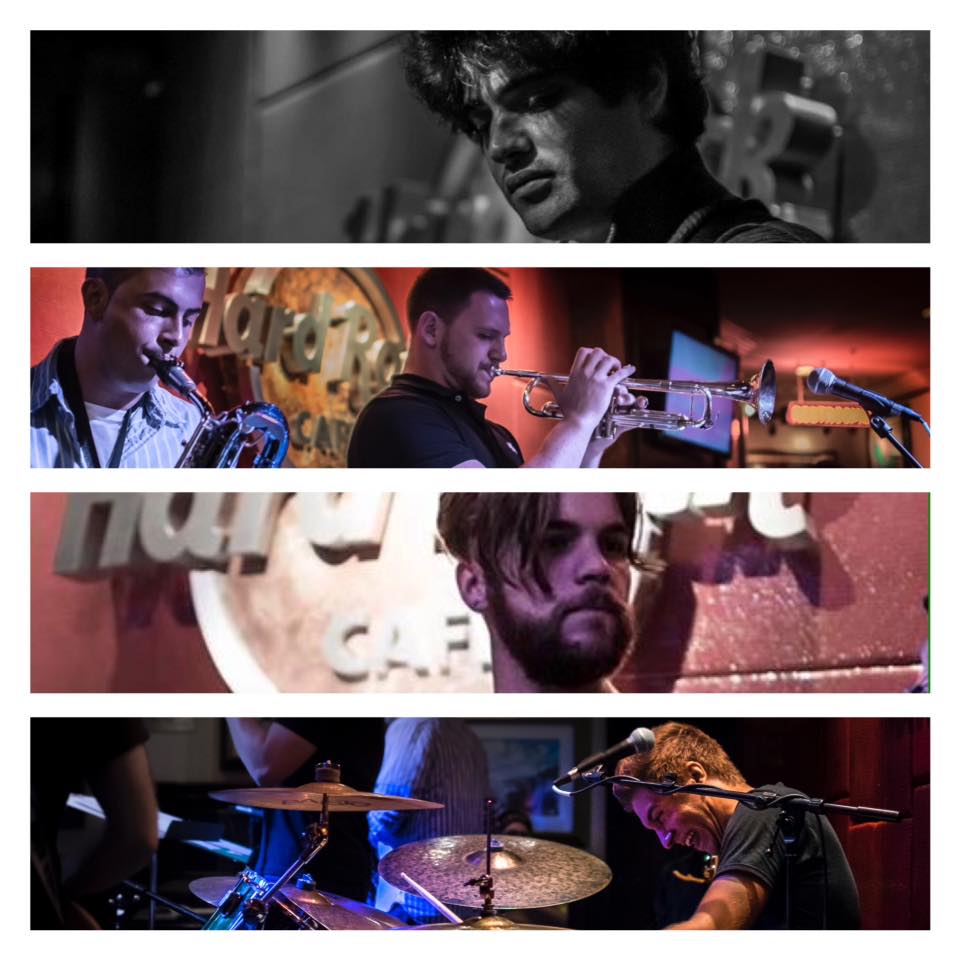 The Stock Car Boys: Racing to be top new thing

If you live in Western New York, chances are you probably haven't heard of the local, alternative band The Stock Car Boys. There isn't anything wrong with that, as the band is relatively new and has a small following, but the band is gaining a following nonetheless.

Buffalo's music scene isn't as big as other cities. The Goo Goo Dolls have been the most famous group to make it out of the area. Other bands such as Every Time I Die and Made Violent have also found success beyond the confines of the area.

However, local bands can find success and gain momentum within the local community.

The Stock Car Boys are one band that could easily gain a substantial following and, potentially, gain "Goo Goo Doll notoriety."

The new music that floods the radio can be repetitive to some. Complaints can range from music sounding too simplistic or songs maybe sounding the same. Overall, some will argue a lot of music lacks originality

That is why when a band comes forward and breaks the "norm" of what music listeners and concertgoers experience, that band is hard to ignore.

The Stock Car Boys are one of those bands.

Their sound appeases to all generations. They can gain interest from fans of classic rock from the '60s and '70s, receive acceptance from the current alternative-indie fan base, and find approval from everyone in between.

Regardless of what demographic is in the audience, the band will make the listener want to move. They will find it hard to not get up and dance, move around or play air drums. The group makes the listener connect with its music.

The Stock Car Boys' greatest accomplishment is that no two original songs are the same. Each track they produce is something new, creating an entirely new experience with every song. At one moment, they can sound like Cheap Trick, then turn around to sound like The Strokes. Listeners may even feel as if they are listening to a forgotten track from "The White Album."

The Stock Car Boys can play slow and they can play fast, and sound good doing it all.

Front man Joseph Roscetti Jr. said he is excited about the band and the future that is ahead of them, and what they can do for the local music scene. Roscetti's singing voice holds a unique impact on whoever listens to it. Not only does he hold power and range, but has the ability to be both original and reminiscent of classic rock simultaneously. 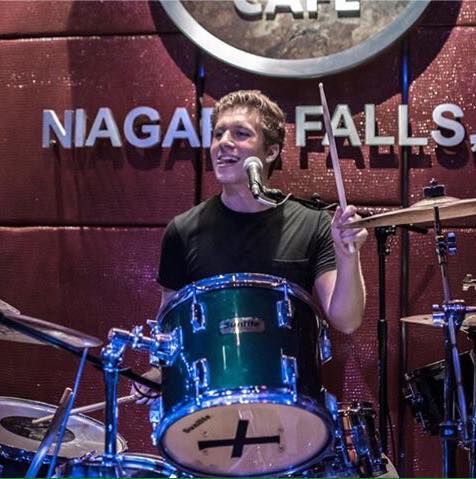 Roscetti, 19, is a junior English education major at Niagara University. He is known among his peers as a lyricist and poet. Published in the school's literary journal, his creativity is never put on hold. He has been playing drums since he was 5. He participated in his school band from fifth to eighth grade. He was also house drummer at Artpark Rock Camp in Lewiston from 2010-15.

When asked about the Stock Car Boys, Roscetti provided a clear and concise definition of what the band is.

"The Stock Car Boys is an alternative in every sense of the word," he said. "I like to think that we're creating something for the Niagara Falls-Buffalo scene that is a little different. It's the exact opposite of what the national media forces on you - the superficial scene."

"We're kind of countering that," he added. "We want to be authentic. We want to create something that makes people happy and want to get up and move. We want them to get that."

The band consists of Roscetti on drums and lead vocals, Dom Sciarrino on lead guitar, John Taylor on bass, Jake Schoelles on trumpet, and Joe Corio on the baritone saxophone.

In 2014, the band released its first single, titled "Parking Lot Parade." The song was reviewed on Renaissance Review's website as single of the week.

"Roscetti provides a powerful vocal track with enough inflection to make Billy Corgan seem static," the review said. "They've found a perfect balance between raw and accessible, a perfect place for Alternative Radio." The review went on to conclude that the single was one of the best heard in 2014.

This year, on March 31, The Stock Car Boys' first nine-song album, titled "Down Below the Balance," was made available for purchase. Reviews from the small fan base were positive.

On the band's Facebook page, responses posted said, "I can't stop listening to it!" and "(I) love 'Down Below the Balance!' (I) listen to it all the time!" One fan even called the band a "very talented and entertaining group of guys."

While the band plays original material, members enjoy playing covers, as well. Some favorites are "The Bucket" by Kings of Leon, "Short Skirt Long Jacket" by Cake, "Boys Are Back In Town" by Thin Lizzy, and "Someday" by the Strokes.

The band started as a duo in 2010. Roscetti and Sciarrino met while attending Artpark Youth Rock Camp. They were put into the same improvisational group, and, as Roscetti said, they've been writing ever since.

The first addition was Taylor, whom Roscetti had graduated with and known at Niagara-Wheatfield High School. The band later added Schoelles and Corio to provide complementary brass for recording and shows on select tracks. The band has only been a quintet since 2014 when the latter two members were officially incorporated.

The band claims influence from acts such as Kings of Leon, The Strokes, Young the Giant, Tokyo Police Club and Arctic Monkeys.

In regard to Croce, Roscetti said, "(He was the) greatest songwriter, in my opinion. He's a great influence on us."

What makes the band different than other alternative bands?

Roscetti said the band separates itself from the scene not only by its style, but also from its musical experience.

"Our writing process is very unique, because we are five studied musicians," Roscetti said. "We all know what to play, why to play it, and how play it."

Roscetti and Sciarrino have experience teaching music at Jerry D'Amico Music Store on Pine Avenue in Niagara Falls. Sciarrino taught for five years while Roscetti is in his fourth year.

Schoelles and Corio have played jazz at the University at Buffalo, as well as jazz organizations at Niagara-Wheatfield High School.

"It's great getting together with fellow young players who get (the music)," Roscetti said. "We make each other sound better. We have a great dynamic."

The band is in the process of creating its second full-length album, "Halfway to Retrospect." Roscetti said the album will "inhibit a concept."

"(By February), we hope to get four to five songs of our next 12 song album done," Roscetti said. "The money we've made throughout the years selling the album and playing various shows is almost all going to our recording project."

The album is set to be finished by late next year.

On Sept. 24, the band played a show at the Hard Rock Cafe, Niagara Falls USA. About 125 people came to the standing-room-only show. Although their first album was available for purchase in March, this show was for The Stock Car Boys official album release party.

Roscetti was both shocked and humbled by the large turnout.

"The show was the most important show we had to date," he said. "Emotions were high in a good way. We put a bow on our first project with the show."

The band's Facebook page had only positive notes about the show.

"You guys were excellent!" said one fan. "Many people I talked to really enjoyed your music." Another posted, "It turned out to be a great day for everyone. (I) loved it!"

Roscetti sees the band playing well into the future.

"We're in it for the good times," he said. "I would love the Stock Car Boys to make it bigger than what we are. I would love for us to move on to bigger and better things."

With both a second album and multiple shows scheduled for the near future, The Stock Car Boys will continue to create opportunities to showcase their unique sound and gain added interest from listeners.

The band is scheduled to perform at The Mug & Musket in Youngstown on Nov. 26, The River Pub in Niagara Falls on Jan. 14, and The Mohawk Place in downtown Buffalo on Feb. 3.