Niagara University's Alliance has an annual program called "Awesome People Say Awesome Things," or APSAT, that encourages students to get involved with a community they might not necessarily have previously been in. Alliance is an organization on campus that has sought to "provide a safe and welcoming place for LGBTQIA individuals and allies." (That long acronym stands for lesbian, gay, bisexual, transgender, questioning, intersex and asexual; these are only the main identities associated with the gay community.)

Alliance's mission is to be a "student group established to work with the university, in addressing needs and concerns related to gay, lesbian, bisexual and transgender students at Niagara University in ways that are appropriate to our Catholic and Vincentian mission."

This organization welcomes students who are part of the community, as well as ally friends, because allies are always important and welcome to join. Alliance says it's important for the community to know there are others who hear their voices.

Alliance provides a safe space for members and also seeks to educate on LBGT+ issues. It gives back to the community by providing information and love.

Many LGBT+ youth face bullying or discrimination for their identity. Some people see the community as different and refuse to accept them for being who they are. In college, one meets people from various backgrounds and ideals that may not be accepting of the community. So it is important, especially in college, for members of the community to have a "safe place" to go to. That is partly what Alliance does.

We All Need A 'Safe Place'

NU's Alliance establishes the "safe place" atmosphere, meaning everyone has a right to voice their opinions without harsh or aggressive judgment. The "safe place" as "a place to talk about issues in the world ... whether they're gay, lesbian, bisexual, transgender or straight," the secretary of NU's Alliance said.

People that could be safe places:

All safe places are identified by their safe place sticker. Many staff and faculty at Niagara University have safe place stickers up for students to go to. It is essential there are multiple outlets for students to go to. This way students can go to someone they are comfortable with that makes them feel safe enough to discuss difficult issues that they otherwise wouldn't want to. They refrain from "ridicule, criticism ... microaggressions - subtle displays of racial or sexual bias - so that everyone can relax," wrote Judith Shulevitz of the New York Times.

In these environments, discussion is important and essential when driving emotional topics. "It lets people who aren't in the community understand what it's like. It also helps to give to students who are part of the community a voice and a place to express themselves" Alliance's secretary said.

In NU Alliance, members cover many topics surrounding the community. Here is a list of some topics already covered:

Stonewall Riots and the Laramie Project are both great examples of negative treatment from the general public. Both instances involve members of the LGBT+ community who were treated unfairly. LGBT+ members were beaten or killed because of their identity in the Stonewall Riots and Laramie Project. Because of the harsh treatment toward the community, people thought it was necessary to spread awareness.

Courtesy of to sexualdiversity.org, here are other important days:

There are quite a few days, all used to spread awareness about those who identify with the community. Many of these people face discrimination and hatred from those who aren't in the community, which is why organizations like Alliance are important. Its program, Awesome People Say Awesome Things, is another form of education and awareness.

Alliance has been organizing APSAT for at least five years now. APSAT is a safe space and offers live events with poems, spoken word pieces, videos, etc., that revolve around experiences in the gay community. It happens annually and is typically showcased in the spring during NU's Ridgefest. Each year, Alliance is looking for students, whether they attend Niagara University or not, to get involved in the program.

Students are able to submit a story, a poem, a song, etc., to be reviewed and entered in the program. These pieces have to do something with the LGBT+ community. They can be an experience, either your's or your friend's, or something borrowed from the internet. Many performances have been re-enacted from videos online. Submissions can be entered anonymously, and don't necessarily have to be performed by the people who wrote them.

You can also volunteer to be behind the creative team. APSAT needs artists. Alliance will greatly appreciate any help, whether it be designing the program, creating a slideshow or helping out during the event.

APSAT really brings people together. The audience for APSAT 2016 almost doubled in size from the year prior. Its "safe place" atmosphere makes peers and families feel comfortable.

The program also helps to educate the general public about topics they may not be familiar with. It can be a great way to get friends and family members comfortable with the LGBT+ community, if they are not already. This is a great way to get real-life experiences, whether good or bad, they are all important. It also gives them an opportunity to interact with their peers, and see them be passionate about something. Exposing yourself to a wider audience shows a lot of courage and is a chance that not many people take. It is a great way to get involved in the LGBT+ community and the environment at Niagara University.

If you like writing, performing and are passionate about the LGBT+ community, email the Niagara University Alliance to become involved, meet new people, and work with a safe and accepting group of people. 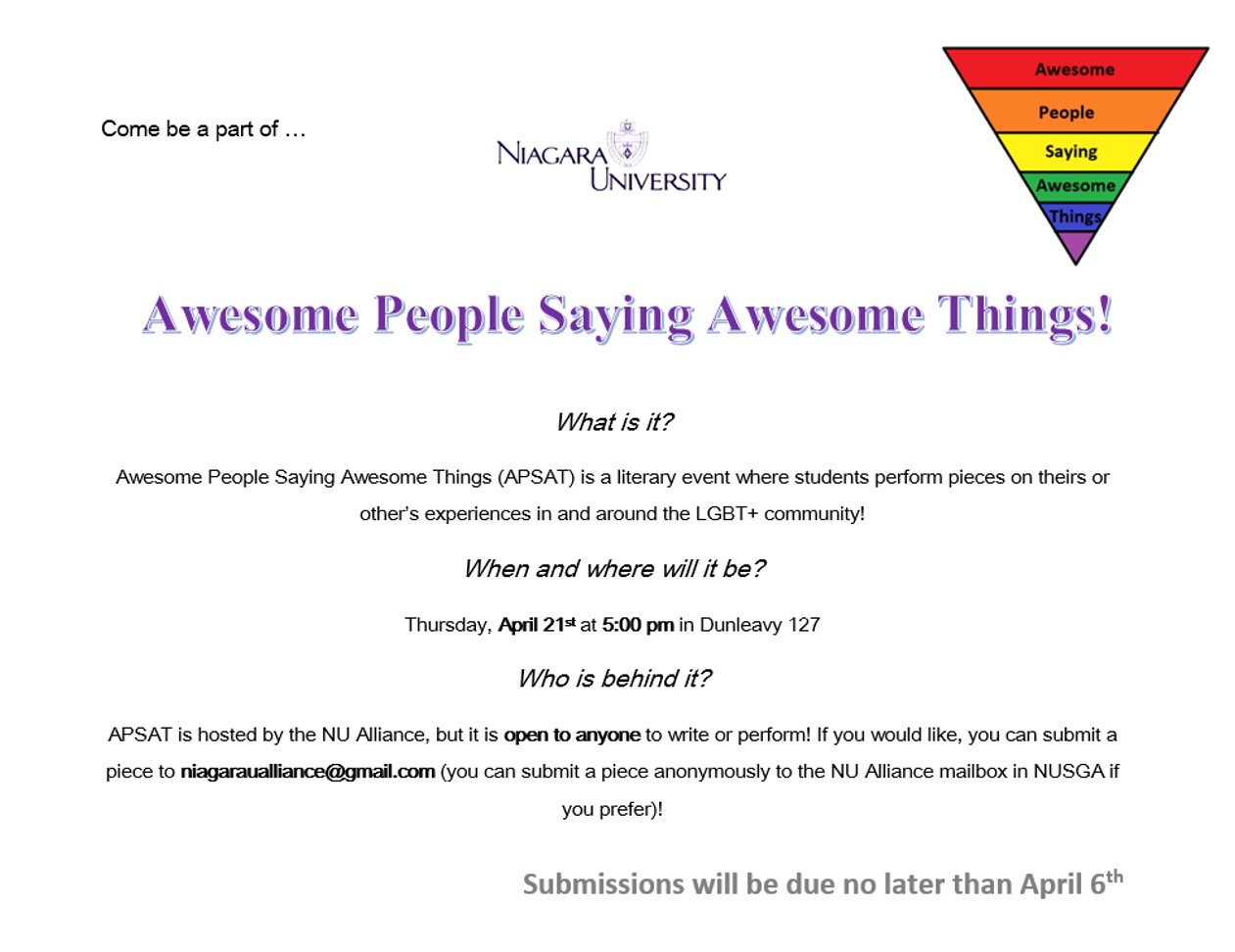