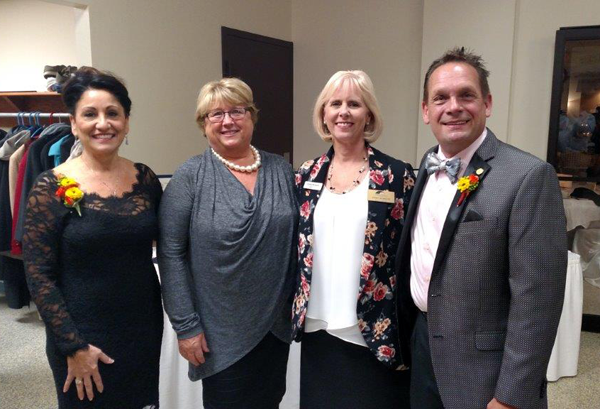 From left, are, Chamber of Commerce of the Tonawandas Executive Director Angela R. Johnson-Renda, chamber board president Phyllis Gentner, chamber board member Cindy Burkett, and Jim Fingerlow (Citizen of the Year awardee).

Chamber of Commerce of the Tonawandas celebrates annual dinner

The Chamber of Commerce of the Tonawandas celebrated its 78th annual dinner on Thursday, Nov. 10. Nearly 200 attendees gathered at the Rescue Fire Hall for the event.

Jim Fingerlow, Citizen of the Year, was introduced by his longtime friend and attorney, the Hon. Joseph Cassata, former NT city court judge and a chamber board member. Cassata emphasized how much service and effort Fingerlow has put into helping other businesses in the Tonawandas, including Webster's Bistro & Bar, Richards on Main and Crazy Jakes.

Jim Pane, owner of Pane's Restaurant, the chamber's 2016 Business of the Year, was introduced by board member Beverly Loxterman, who applauded Pane for keeping with his family's business and traditions since 1959.

The volunteer organization honorees were introduced by chamber board President Phyllis Gentner.

This year's not-for-profit honoree, the Allan Herschell Carrousel Factory Museum (celebrating 100 years of the No.1 Special 1916 Carrousel), was introduced by North Tonawanda Mayor Art G. Pappas. In her acceptance speech on behalf of the Allan Herschell Company, board president Reanna Darone shared some of the history of the museum, including how it began and operated in North Tonawanda from 1916-59, later being sold to a company in Buffalo. In 1998, the company's assets were purchased from another company in Kansas and brought back home to North Tonawanda.

To conclude the evening, the Rev. Samuel Ciffa spoke about the Veterans Day holiday. He led all attendees in a rendition of "God Bless America" before performing the benediction.