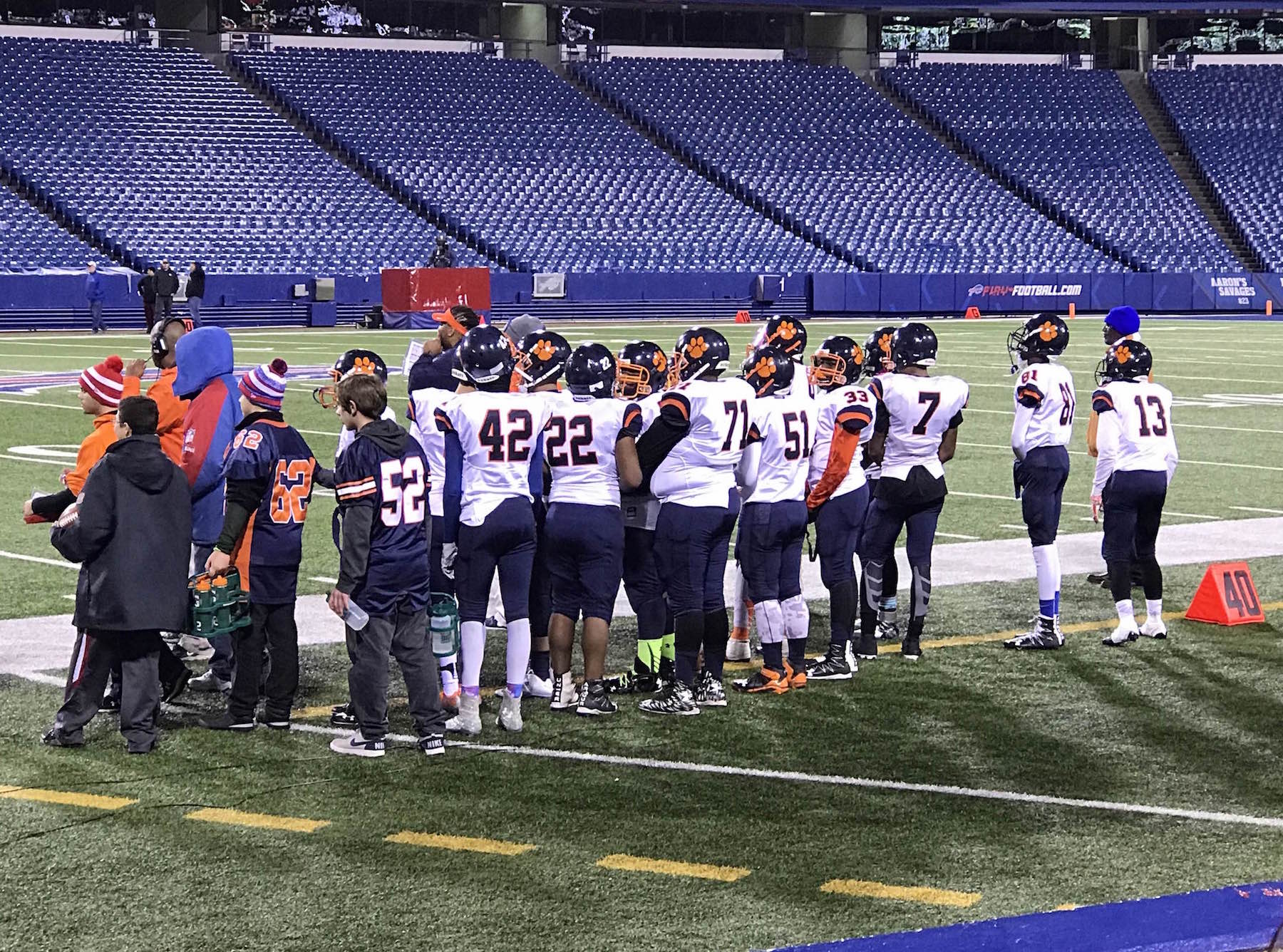 Inside a stadium built to hold more than 70,000 people, the Bennett Tigers defeated the Starpoint Spartans, 28-13, in front of a much smaller crowd at New Era Field, home of the Buffalo Bills.

In a sloppy game Friday with a load of penalties, the Tigers were able to make more big plays than the Spartans, which was the key to their victory.

Starpoint started the game with the ball and seemed destined to put points on the board. The drive was highlighted by Tajay Ahmed running five times for 23 yards, and also two big pass plays on third down by quarterback Aaron Chase to Sam Mazzara.

After running 16 plays and taking 7:41 off the clock to start the game, the drive was unsuccessful after Bennett's Jamel Lofton sacked Chase for a loss of eight on third down, resulting in a punt.

Bennett took over looking to show the offensive power they showed the week prior. After a couple big gains by Isaiah McDuffie and Lofton for 12 and nine yards respectively, the drive ended after a McDuffie fumble recovered by the Spartans.

The Spartans took over on offense, but went three-and-out to end the first quarter with no score between the two teams.

After a Spartans punt, Bennett would run five plays, four of the five being gains of five yards or more, but the drive was set back by two holding penalties. The Tigers would punt on fourth down.

The Spartans next drive would result in another three-and-out after Chase was sacked again on third down. Starpoint would punt it to the Bennett 26-yard line.

Bennett would begin to show the offensive power seen against North Tonawanda last week. Quarterback Derrick Bishop passed to wide receiver Kendrick Benson for a gain of 22 yards. The Tigers followed that by another 22-yard gain by McDuffie. Finally, on the third play of the drive, Lofton ran it in from 30 yards out for a Tigers touchdown. After a failed 2-point conversion, the score was 6-0 Bennett.

On the ensuing kickoff, Bennett performed a squib kick that bounced off a Spartans' return man and into the hands of a Tigers' special-teamer. The Tigers would take over with the offense having the most momentum it had all game coming off a three-play, 74-yard drive.

Nothing went well on this drive, though, as penalties pushed the Tigers back as far as having a second down and 32 yards to go. On fourth and 19, Bennett elected to punt, but the snap went over the head of the punter and was recovered, resulting in a turnover on downs. The Spartans would take over in good field position at the Bennett 38-yard line.

Starpoint would gain one first down on a Anthony Robinson six-yard gain, but that would be followed by three plays that wouldn't gain a yard. The Spartans faced a fourth and 14 when Chase scrambled, looking for a receiver, and decided to keep it himself. He was stopped well short of a first down, resulting in a turnover on downs.

Bennett took over, looking to score before halftime. On a second down and 10 play from its own 26-yard line, Bishop found wide receiver Jetone Sheford for a gain of 40 yards. On the next play, Lofton took a carry 21 yards to the Starpoint 13-yard line. On the next play, Bishop threw to Michael Horton in the end zone, but the pass was ruled incomplete.

Playing at New Era Field gave the fans the luxury of replay, and on the replay, many fans deemed Horton in bounds. Still, the refs ruled it out and, in high school, there are no official replay reviews.

A play later, McDuffie found the end zone from 13 yards out. After another failed 2-point conversion, Bennett led 12-0.

Starpoint had just a little under a minute left to try and drive before halftime. After a gain of eight yards from Terry Rutland, Chase found Mazzara on the side for a first down. An incompletion made it second and 10 with 10 seconds left in the half. Chase stepped back and hit tight end Josh Brooks with a pass down to the 20-yard line. With three seconds left, Starpoint attempted a 38-yard field goal, which was partially blocked and no good.

At halftime, the Tigers led the undefeated Spartans 12-0.

Bennett would receive to start the second half. McDuffie greeted the Spartans defense with a 21-yard run, but nothing followed after that, as Bennett turned it over on downs after a sack on fourth down.

This is how much of the third quarter would go, as Starpoint went three-and-out on its next drive, then Bennett's next drive only lasted three plays after Griffin Mack intercepted Bishop's pass.

Starpoint would go three-and-out again. Bennett's next drive would lead to the end of the third quarter with the score still reading 12-0 Tigers.

Bennett would put together a 12-play drive, but produce no points, turning the ball over on downs once again. At the end of three quarters, Bennett had managed 303 total yards.

The Tigers were looking at a possible turnover-on-downs situation once again with a fourth and seven. Bishop took matters into his own hands, though, as he scrambled for nine yards, which resulted in a first down.

On the next play, McDuffie went into the end zone for his second score of the day. A Lofton run for 2 points was successful, and Bennett extended its lead to 20-0.

With just about eight minutes left and a championship looming, Starpoint would take over at the 45. The offense finally moved forward with Chase going 3-for-4 on the drive for 40 yards. He found Mazzara once for 20 yards and the Josh Brooks for 16. A pass to Robinson for a four-yard touchdown capped off the drive. After the extra point, the score was 20-7.

The Spartans' onside kick attempt was recovered by Bennett. The Tigers, with little time left, looked to run the clock out. The running attack would not stop. McDuffie took a carry for 12 yards, and then Lofton followed up for 14 yards, and Nigel Robinson for 10 yards. Finally, McDuffie, a Boston College commit, capped the drive off going 14 yards for his third score of the day. Another two-point conversion was good and it was 28-7 with little time left.

Starpoint didn't quit, as they scored with seven seconds left on a pass from Chase to Robinson, making it 28-13. But time would run out on the Spartans undefeated season, and Bennett would take a knee and celebrate a 28-13 victory.

With their first loss of the season, the high school career of 20 Spartans came to an end (almost half the team). It will be a big task to replace the 20 seniors, but Starpoint will have sophomore quarterback Chase and wide receiver Mazzara returning. Including Chase, the Spartans carried four sophomores, as well as 14 juniors, including Mazzara. They finish the season with nine wins and one loss.

For Bennett (8-2), the win clinches the Section VI Division A title. The team's journey is not over, as Bennett will play the undefeated Greece Athena Trojans (10-0), the Section V winner out of Rochester. 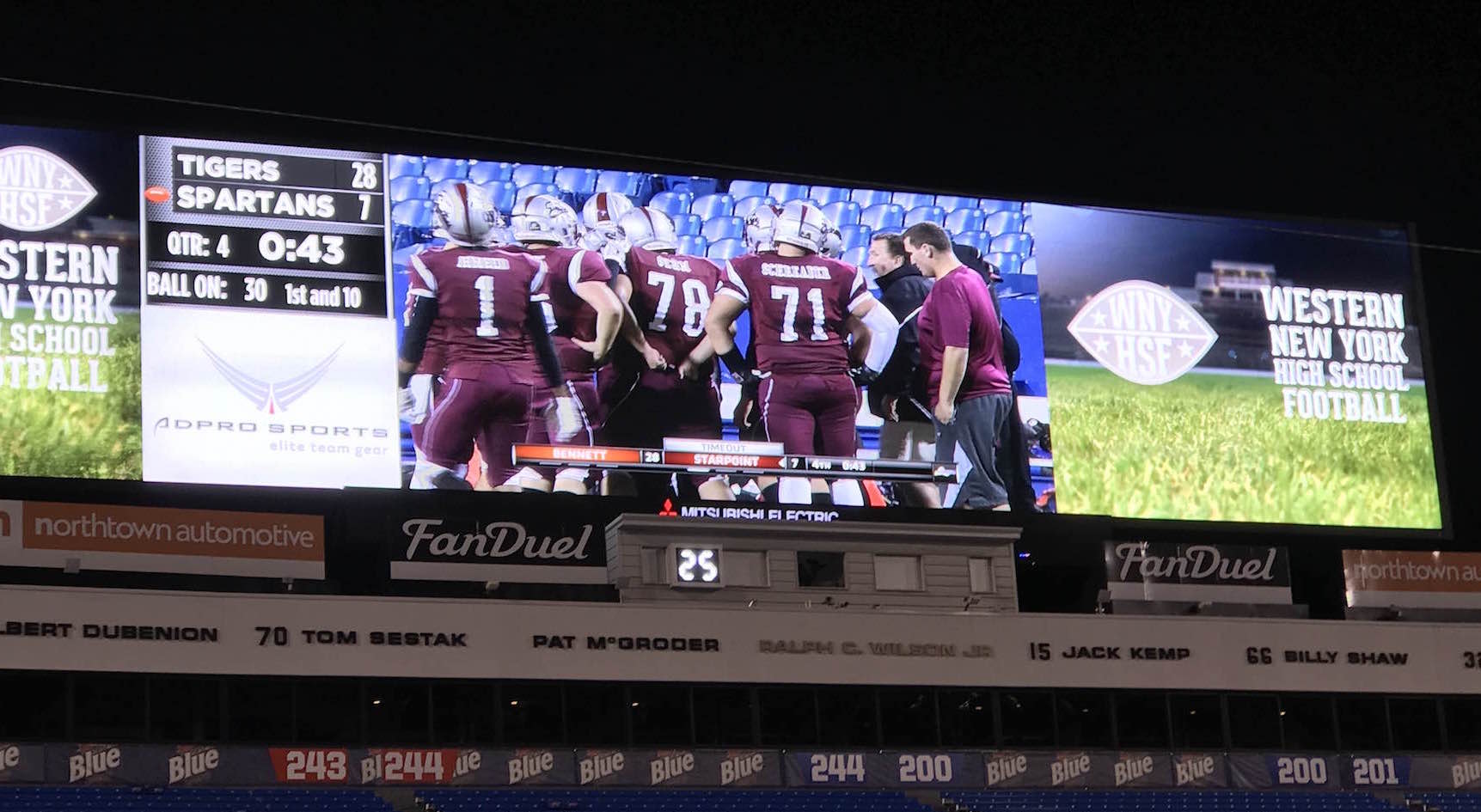