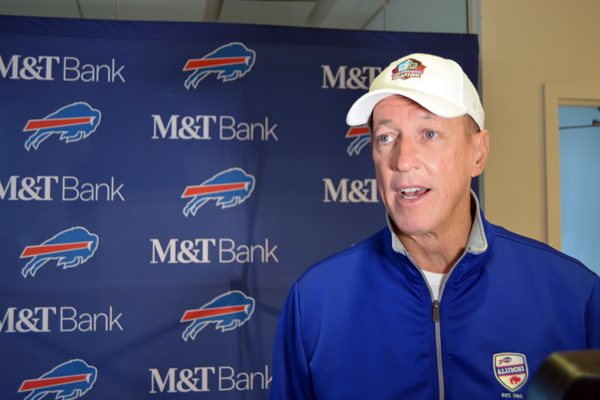 Jim Kelly speaks at an event to rally fans for the Buffalo Bills game this Sunday against the Miami Dolphins.

Buffalo Bills legend Jim Kelly paid fans a visit to M&T Bank's Military Road branch Thursday to rally fans as the team prepares for its showdown against Miami this weekend.

The event was organized by the Bills and M&T Bank, as part of their longstanding relationship, and shared commitment to the Buffalo community.

"We're all in this together," said Kelly, a first-ballot hall of famer who led the Bills to four consecutive conference championships. "It always seems that people from our community always rally behind the Bills and M&T has been one (supporter) for many years."

When asked about what he expects for the rest of the season, Kelly said, "We all hope the Bills continue to win. You ever know. You just pray that what they have going will continue."

He added the key to succeeding is staying healthy. There is a possibility of Bills running back LeSean McCoy won't be able to play in Sunday's Bills-Dolphins contest due to a hamstring injury.

Kelly said, "We gotta stay healthy. If we're healthy, there's not many teams that can beat us."

McCoy left Wednesday's practice with a hamstring issue, and remained on the sidelines on Thursday. Coach Rex Ryan remained hopeful McCoy would be able to play on Sunday. 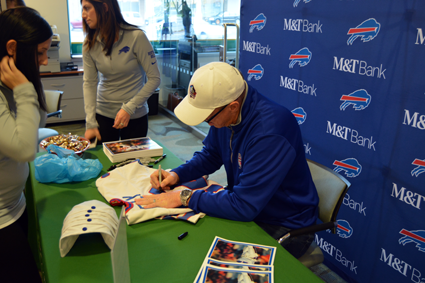