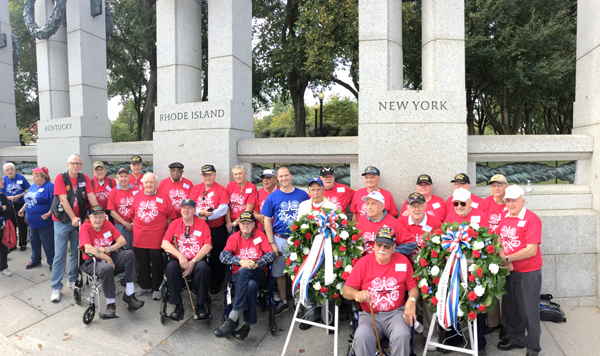 Prior to takeoff, the American Legion Stephen Sikora Post 1322 held a special sendoff ceremony at the Buffalo Niagara International Airport for the 24 World War II and Korean War veterans.

"During last year's trip, it was touching to see the outpouring of emotion from our veterans," Ortt said. "This daylong trip allows members of the 'Greatest Generation,' who are now in their 80s and 90s, and other generations of Americans who have bravely served our country, to travel to the nation's capital to see their monuments for the first time.

"The World War II Memorial wasn't completed until 2004, so, sadly, many members of our Armed Forces who served in that era did not get to see the historic tribute to their fallen brothers and sisters. This WNY 'Warriors Flight' is a way for us to honor our veterans and to show that we are forever grateful to the millions of Americans who served, and the thousands who died protecting our country and our liberties. It's our way of giving back to our nation's heroes."

The veterans were chaperoned by local volunteers as they traveled around the nation's capital. The group visited the National WWII Memorial, Korean War Memorial, Vietnam War Memorial, Lincoln Memorial and Iwo Jima Memorial. They also saw the "Changing of the Guard" ceremony at the Tomb of the Unknown Soldier in Arlington National Cemetery.

During an emotional wreath-laying ceremony at the WWII and Korean War memorials, the group paused to reflect on the lives lost in service.

The Patriot Guard Riders concluded the trip with a welcome home ceremony at the Buffalo airport. Several members of the Patriot Guard lined the arrival area with the American flag at their sides, and saluted and thanked each veteran for their service.

The "Warriors Flight" was made possible with a $25,000 grant from the Walmart Foundation, making the trip free for the veterans. Other partners included the Niagara USA Chamber of Commerce, and Health Systems Services, which provided wheelchairs for the vets.