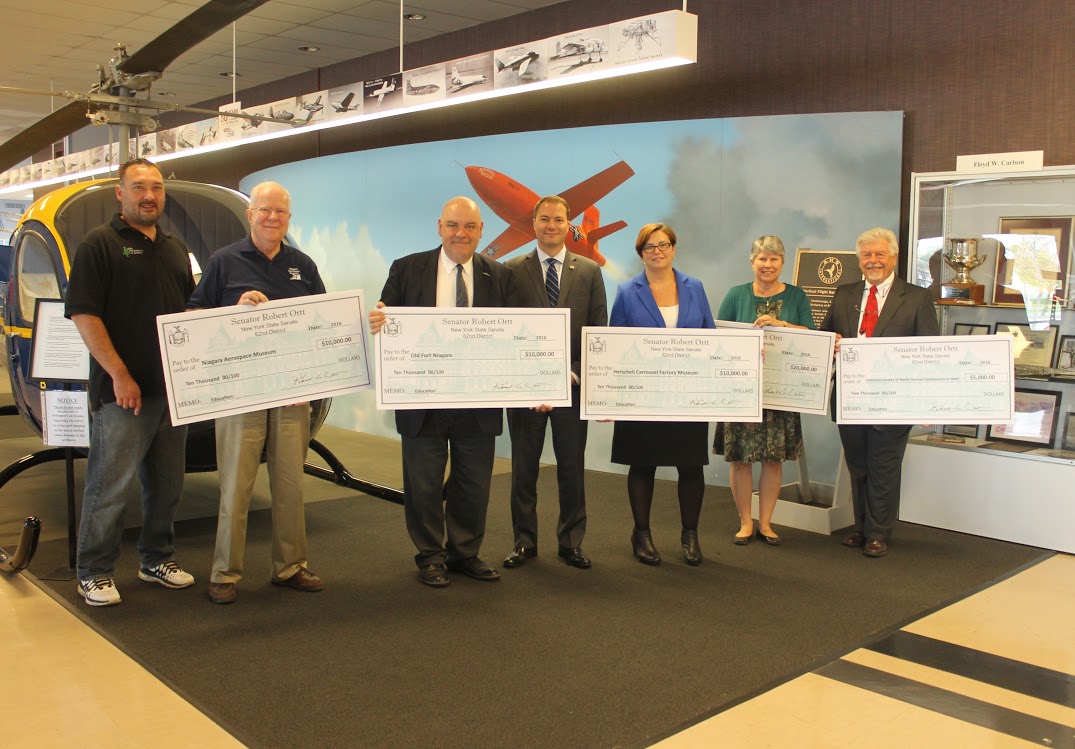 Ortt delivers a total of $55,000 to Niagara County museums

New York State Sen. Rob Ortt delivered a total of $55,000 in ceremonial checks to several museum organizations throughout Niagara County. He secured the funding as part of the 2016-17 state budget, in addition to funding secured last year for museums in his district.

The Niagara County Historical Society received $20,000 to install two separate heating, ventilation and air conditioning systems at its headquarters on Niagara Street in Lockport. The HVAC technology will provide a controlled climate inside the historical building to slow the deterioration process of artifacts, artwork and textiles. Additionally, the Historical Society will purchase equipment to monitor, measure and log the moisture content and temperature of the indoor environment.

The Niagara Aerospace Museum received $10,000 for the preservation of dozens of historic films about former aircraft manufacturers, including the Bell Aircraft Corp., the Consolidated Aircraft Corp. and the Curtiss-Wright Corp. Working with SUNY Binghamton, the museum plans to inspect, clean, repair and digitize more than 1,200 reels of historic films. Some of the films represent significant aviation contributions and interviews with, arguably, the most influential people in aviation during the time period of 1935-80.

Old Fort Niagara in Youngstown also received $10,000. The historic military fort will use the money to continue its interactive educational programs, which consist of re-enactments and interpretive demonstrations of soldier life, musket and cannon firing, and historic trades and crafts. These are designed to teach visitors about the history of the Niagara Region during the 18th century.

Ortt also presented a $10,000 ceremonial check to the Herschell Carrousel Factory Museum in North Tonawanda to help support the educational, cultural and recreational programming the roughly 15,000 visitors experience every year.

And lastly, a check in the amount of $5,000 was handed over to the Historical Society of North German Settlements in Western New York. The organization operates the Das Haus and Der Stall German Heritage Museum in the Village of Bergholz. The funding will be used to replace the roof on the Der Stall building, so that tourists from around world can continue to enjoy the artifacts on display from some of the original settlers.