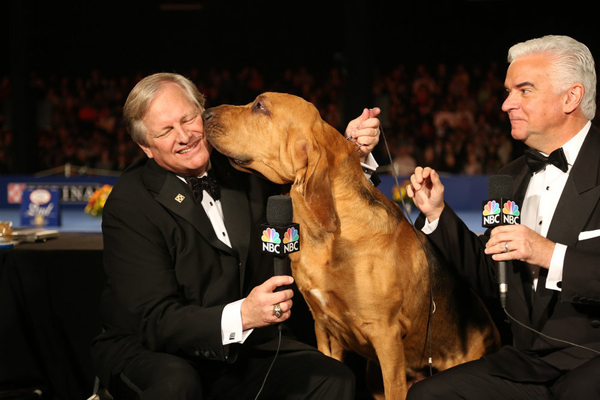 Over 1,000 dogs from more than 200 eligible breeds are expected to participate in the competition. The crowning of Best in Show will be the culmination of the two-hour television presentation - and will also feature the seven Best in Show finalists walking a fashion-show style runway while the judge decides the champion. As part of the broadcast, stars from NBCUniversal's television hits are expected to share top billing.

Created by NBC Sports Group in a multiyear agreement with the Kennel Club of Beverly Hills and Purina, the new program will be hosted from the Fairplex in Pomona, California, by legendary breeder, owner, handler, author and judge David Frei, alongside award-winning actor, author and Broadway star John O'Hurley. Frei and O'Hurley also co-host television's most-watched canine competition, NBC's "The National Dog Show Presented by Purina."

"We are thrilled about becoming a part of the dog show tradition on USA Network and NBC," said Tom Powers, president, Kennel Club of Beverly Hills. "Our goal is to make this a real celebration of all the dogs in our life."

"We're excited to strengthen our partnership with NBC to continue delivering engaging and family-friendly dog show programming for pet lovers with this new concept that combines the best of the entertainment and dog show worlds," said Sean Fitzgerald, vice president, Purina professional engagement team. "We're proud that the new 'Beverly Hills Dog Show Presented by Purina' will serve as a reminder of Purina's belief that pets make our lives bigger and better."

NBC Sports Group and USA Network have, for years, produced television's most compelling dog show competitions. In 2002, NBC Sports Group created a holiday tradition introducing "The National Dog Show Presented by Purina." Anchored by Frei and O'Hurley, last year's show on NBC reached more than 26 million viewers over its debut broadcast at noon on Thanksgiving Day, followed by a primetime encore the next night. For more than 30 years, USA Network televised the Westminster Kennel Club Dog Show, with Frei co-hosting the competition for the past 27 years.

In addition to the Easter night debut of the "Beverly Hills Dog Show Presented by Purina," USA Network will present a daytime encore on April 17, and NBC will air a daytime encore on Sunday, April 23. NBC Sports Network (NBCSN) will also feature the show in its annual "Thanksgiving Day Dog Show Marathon" on Thursday, Nov. 23.