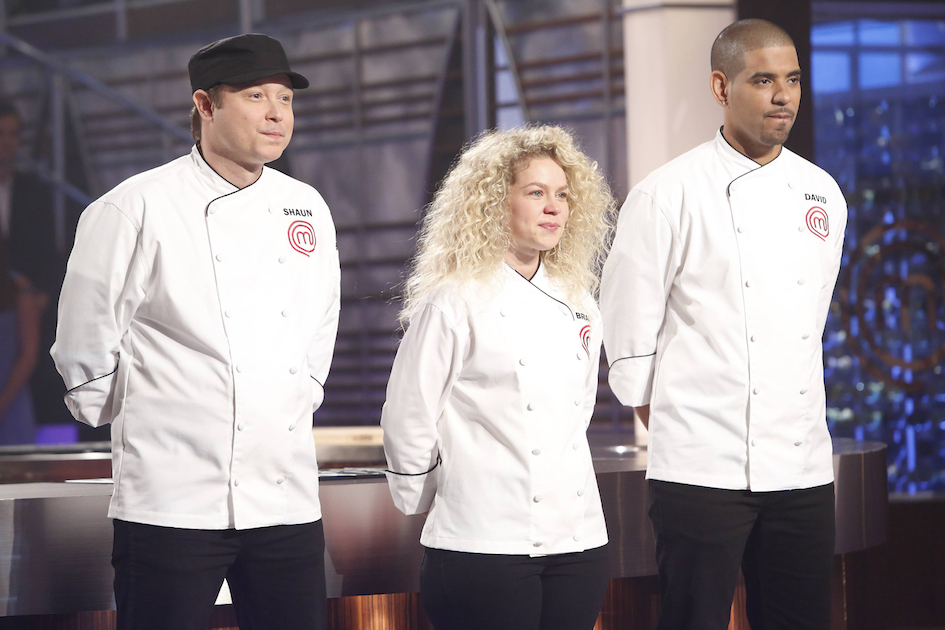 "MasterChef": From left, are contestants Shaun, Brandi and David in the season finale episode airing Wednesday on FOX. (Photo by Greg Gayne/FOX)

In addition to earning the "MasterChef" title, O'Neale, a 33-year-old DJ from Las Vegas, walked away with a cookbook deal and the $250,000 grand prize. He also will be one of the featured chefs on the "MasterChef" cruise, which sets sail later this year.

"Winning 'MasterChef' is, by far, my greatest achievement. To be able to share my recipes with the world in my very own cookbook has been a longtime dream of mine and now I get that opportunity," O'Neale said. "The 'MasterChef' title is something I have worked my butt off for and I couldn't be more proud to represent the 'MasterChef' legacy!"

"Shaun has been a strong contender since the beginning of this season and continued to impress each of the guest judges," Ramsay said. "His passion, enthusiasm and dedication was evident."

In the season finale episode, which, for the first time in "MasterChef" history, featured three finalists, the home cooks prepared an appetizer dish, an entrée and a dessert.

Brandi Mudd, a fifth-grade teacher from Irvington, Kentucky, prepared bourbon-braised pork belly with apricot barbecue sauce and butternut squash puree, topped with rhubarb and chard slaw for an appetizer; seared duck with wilted greens and ramp hushpuppies as an entrée; and corn meal madeleines with a white chocolate mousse for dessert.

David Williams, a poker player, who also is from Las Vegas, made a beet-cured salmon with uni and caviar, topped with a poached egg for an appetizer; savoy-wrapped guinea hen and foie gras with a morello cream sauce as his entrée; and glazed cherry with chocolate crumble for dessert.

In the end, it was O'Neale's exquisite flavors and thoughtful dishes that won over the judges and earned him the "MasterChef" title.

At the end of its seventh season, "MasterChef" ranks as the season's No. 1 cooking show on television, among adults 18-49.

"MasterChef" is once again giving talented home cooks the chance to prove they have what it takes to make their marks on the culinary world. Visit masterchefcasting.com to pre-register and for the most up-to-date audition information.