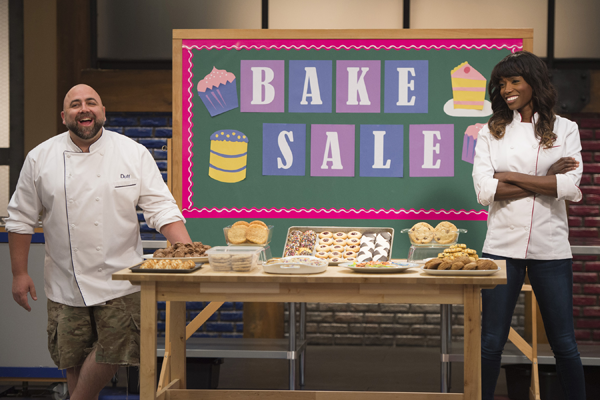 Duff Goldman and Lorraine Pascale have drafted 12 of the most disastrous bakers in the country for a grueling baking boot camp on Food Network's "Worst Bakers in America." The two stars of sweets attempt to mold these masters of cake-wrecks and colossal cookie-fails until one vastly improved wannabe baker rises to the level of pastry perfection.

The talentless bakers will be split into two teams and, over six weeks, beginning Sunday, Oct. 2 (10 p.m. ET/PT), Duff and Lorraine will attempt to transform their team of recruits into pastry experts. Based on their performances and progress in a series of sweet and savory baking challenges, the recruits will be narrowed down each week until only two are left standing. The chefs will face off in an intense bakery battle for the chance to win the $25,000 grand prize - and earn bragging rights for their team leader.

"Audiences have enjoyed the comical mishaps and heartwarming transformations of the recruits on 'Worst Cooks in America,' so it was only natural for a fresh batch of baking disasters to be given the chance at baking bliss," said Didi O'Hearn, senior vice president of programming, Food Network and Cooking Channel. "Renowned bakers Duff Goldman and Lorraine Pascale are the perfect pair to lead the recruits through the entertaining boot camp on 'Worst Bakers in America.' "

The baking recruits quickly learn boot camp is no cakewalk. On the premiere, Duff and Lorraine assess the contestants' skills by challenging them to create desserts inspired by pictures and recipes from FoodNetwork.com. After witnessing their baking blunders, Duff and Lorraine realize they must start with the baking basics, and begin with a classic sugar cookie.

Upcoming episodes feature terrifying treats for Halloween, wedding cake decorating, pie contests and animal-shaped sweets. The worst baker from each team who crumbles under the pressure will be eliminated.

The season culminates when the two remaining recruits face off in in the ultimate bakery battle. The one who has transformed the most will go home with the grand prize.

Viewers craving more can go behind the scenes of the competition and relive the worst baking moments at FoodNetwork.com/WorstBakers. They can also join the baking banter on Twitter using #WorstBakers.

Duff graduated from the University of Maryland, Baltimore County, with degrees in history and philosophy. He then went on to study at the Culinary Institute of America at Greystone, and from there went on to work at several acclaimed culinary destinations, including French Laundry, Vail Cascade Hotel and Todd English's Olives, before returning to Baltimore in 2000 to become a personal chef. In March 2002, he opened Charm City Cakes, and it soon became a household name on the hit Food Network show "Ace of Cakes," which aired for 10 seasons. Duff currently is the co-host of "Kids Baking Championship."

Lorraine is best known for her string of hit TV series, which include BBC 2's "Baking Made Easy," "Home Cooking Made Easy," and Cooking Channel's "Fresh, Fast and Easy Food." She currently serves as a judge on Food Network's "Holiday Baking Championship" and "Spring Baking Championship." In addition to her TV series, she has authored six best-selling books and made a documentary, "Fostering & Me," in which she looked at her own experience of being fostered as a child and the experiences of foster children.