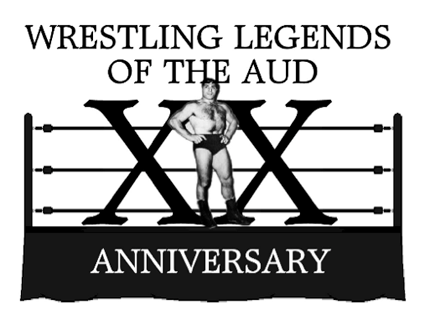 On June 7, 1996, the historic "Wrestling Legends of the Aud, a Tribute to Ilio DiPaolo" professional wrestling celebration was held at Memorial Auditorium. That was the final event to ever take place in the "Aud."

The original "Wrestling Legends of the Aud" in 1996 featured a combination of wrestling legends and contemporary stars of Legends such as Bruno Sammartino, Dick Beyer, Tony Parisi and Dominic DeNucci were in attendance, along with WCW stars Randy "Macho Man" Savage, Ric Flair, "Diamond" Dallas Page, Lex Luthor and Sting. Also honored were members of the Buffalo Boxing Hall of Fame and martial arts master Gary Castanza.

That night drew more than 15,000 fans and raised over $100,000 for Children's Hospital and the DiPaolo Scholarship Fund. It also led to "Wrestling Legends" parts II-IV, and a partnership with the WCW that brought nationally televised matches and pay-per view events.

There will also be special appearances by former WCW kingpin Eric Bischoff, The Nasty Boys, Jimmy "Mouth of the South" Hart and "Leaping" Lanny Poffo. Members of the Buffalo media will be on hand, as will current Buffalo Bills, Sabres and alumni.

On July 23, the late Randy "Macho Man" Savage will become the first person inducted into the Ilio DiPaolo Legends of the Aud Hall of Fame. His brother, Lanny Poffo Jr., will accept the honor.