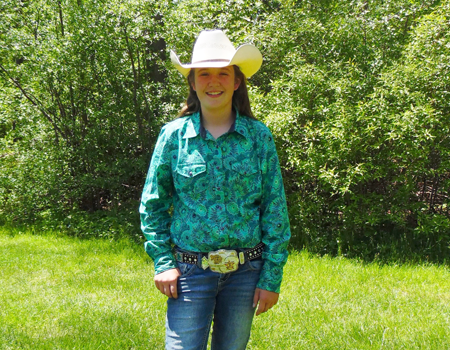 Michaila Raby, a sixth-grade student at Lewiston-Porter Middle School, has earned a position on the New York State National Junior rodeo team. She will travel with fellow teammates to Lebanon, Tennessee, June 19-25 to compete at the 12th annual National Junior High Finals Rodeo in the barrel-racing, goat-tying and pole-bending competitions.

Michaila began her rodeo career six years ago under the instruction of Melissa Koser of MK Quarter Horses in Youngstown and Wilson. Beginning at age 6, Michaila's dedication and desire to be the best were on display each time she entered the arena. "Spending every day at the barn working with all of the horses has taught her the value of care and commitment needed to succeed," said her mother, Suzanne Raby.

Michaila ended her first year on the New York State Rodeo Team, earning fifth place in pole bending and goat tying, and achieving Reserve Champion of Barrel Racing and the 2016 Rookie of the Year honors. She attributes her success to the guidance of Koser of MK Quarter Horses, along with her horses, Loretta and Fletcher. The Lew-Port student said she is blessed with a tremendous support system - from New York to Wyoming - that has allowed her to grow and advance at such a young age.

Featuring roughly 1,000 contestants from 43 states, five Canadian provinces and Australia, the NJHFR is the world's largest junior rodeo. In addition to competing for more than $75,000 in prizes, NJHFR contestants will also vie for more than $100,000 in college scholarships and the chance to be named a National Junior High Finals Rodeo national champion.

Again this year, the Saturday championship performance will be televised nationally as a part of the Cinch High School Rodeo Tour telecast series on RFD-TV. Live broadcasts of each NJHFR performance will also air online at www.NHSRATV.com. Performance times are 7 p.m. June 19, and then 9 a.m. and 7 p.m. each day after.

Along with rodeo competition and the chance to meet new friends from around the world, NJHFR contestants have the opportunity to enjoy shooting sports, volleyball, contestant dances and family-oriented activities, attend church services sponsored by the Fellowship of Christian Cowboys, shop at the NJHFR tradeshow, and visit area attractions.