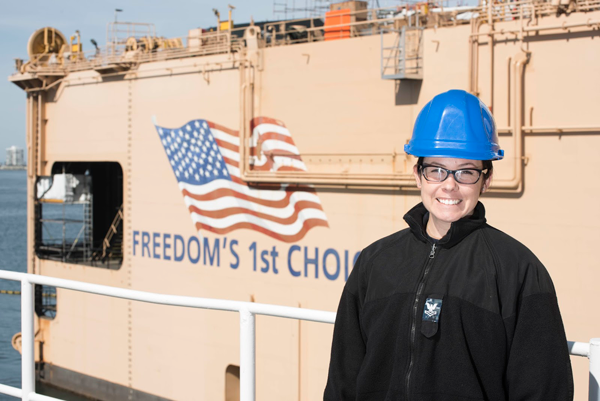 "I love interacting with the civilian and military counterparts at this job," Bellreng said. "I always get to learn many new things as we go through this availability."

Commissioned in November of 1996, Milius measures approximately 500 feet and is powered by four gas turbines that allow the destroyer to achieve more than 30 mph in open seas.

"Leading Milius sailors is exceptionally rewarding, because they genuinely care for one another as people," said Cmdr. Gil Ayan, commanding officer of USS Milius. "They want to see one another succeed, and each of them works toward that collective goal. As a commanding officer, you can't ask for a better culture than that."

With a crew of over 300 sailors, jobs are highly specialized and keep each part of the destroyer running smoothly, according to Navy officials. The jobs range from washing dishes and preparing meals to maintaining engines and handling weaponry.

"I believe we have a good chain of command," Bellreng said. "They really look out for their sailors and will help us achieve our goals."

Challenging living conditions build strong fellowship among the crew, Navy officials explained. The crew is highly motivated, and quickly adapt to changing conditions. It is a busy life of specialized work, watches and drills.

"Serving in the Navy means that I'm lucky enough to serve in an organization," Bellreng said. "Not everybody can serve in the Navy or military, and I'm very lucky to have that opportunity."